Mod
This is the basic layout of a character sheet and ALL sections must be filled out in order for the character to be approved. This is only the minimum information, however, and additional information may be added.

Personality: She doesn't let anyone in. A stony and cold exterior, rather stoic, not very personal. She hasn't been able to find a sense of belonging anywhere in her life. She is a good person, basically, but she isn't very grounded. 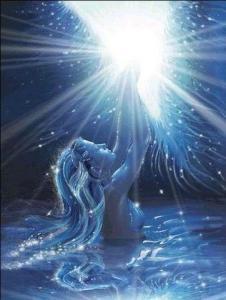 Hair: Sandy blond, long, thick, and curly
Eyes: Deep blue
Weight: A slight girl, on the lighter side
Height: 5'4"
Distinguished Markings (If any): Well, she can turn into water. But that doesn't show when she doesn't turn.

Backstory: Well, first of all, she is a water nymph. And, she can turn into water at will. And breath underwater. And control water. She maintains a stony exterior. She is not very open about her life in the slightest. She tries to distance herself from humans, and though she doesn't despise them or anything like that, she doesn't have an affinity for that race, either. She was taken from the body of water she originally belonged to at birth, and though she likes to pretend that she basically knows where it is, she really has no clue. Perhaps if she were to near it, she would just have this feeling and know, but that is not the same as actually for the present knowing. She has lived with a peasant family in the fields and farms in Azakor. She has some loyalty to it as it has been her home for quite a bit of her life, but she has mixed feelings in her heart as to how far those loyalties go, or if she should really actually be against it for she was stolen from her home by it's people. She likes to pretend she knows who she is and is happy with what she has, but she is rather... unsure, on the inside.

Weakness:
At this point in her life, the water side of her is a secret, and she likes to keep it that way.
She is uncomfortable with herself, who she really is.
She is not very grounded, is kind of lost.
In her human-like form, swords and sticks and stones can hurt her, unlike in her water form.
She is stoic, and doesn't let people in. And, she doesn't go into other people's lives and get all personal with them. Not very good with showing compassion, while she is very sympathetic hidden under the 'mask' she wears, the 'wall' she's build up around herself.

Strengths:
She can turn into water, and there isn't much that can really hurt water.
She can control water.


Family: She lives with a peasant family in Azakor, and has for some years. She is settled there, and accepted (for what they think she is). Doesn't know what body of water she came from.