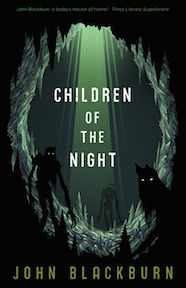 Reprinted for the first time in 40 years, John Blackburn's 1966 creature hit, Children of the Night. Valancourt Books is very pleased to revive this great author and we now have 12 Blackburn books available on our website with more on coming this year.

For centuries, the small English village of Dunstonholme has been the scene of mysterious tragedies. Local lore traces these strange events back to the year 1300, when a sect of Christian heretics known as the Children of Paul were involved in a bloody massacre. Since that time, there have been railway disasters, mining accidents, shipwrecks, and other terrible happenings. Now a wave of suspicious deaths has the locals on edge and looking for explanations. Dr. Tom Allen and adventurer J. Moldon Mott think they know what is behind the killings: an ancient evil, dating back seven hundred years, lies hidden underground—and it is preparing to emerge to the surface . . .

John Blackburn (1923-1993), the author of twenty-eight bestselling thrillers, has been hailed by The Times Literary Supplement as ‘today's master of horror.’ In his classic Children of the Night (1966), reprinted here for the first time in 40 years, Blackburn updates medieval legends and folklore to create a bone-chilling tale of modern-day horror that is among his very best.

‘John Blackburn is today's master of horror, and this latest novel, about a village gripped by the culmination of ancient vileness, induces proper shivers.’ – Times Literary Supplement

‘He is certainly the best British novelist in his field and deserves the widest recognition.’ – Penguin Encyclopedia of Horror and the Supernatural

‘[A] stylish, genuinely chilling author . . . undoubtedly one of England's best practicing novelists in the tradition of the thriller novel.’ – St. James Guide to Crime & Mystery Writers

John Blackburn was born in 1923 in the village of Corbridge, England, the second son of a clergyman. He started attending Haileybury College near London in 1937, but his education was interrupted by the onset of World War II; the shadow of the war, and that of Nazi Germany, would later play a role in many of his works. He served as a radio officer during the war in the Mercantile Marine from 1942 to 1945, and resumed his education afterwards at Durham University, earning his bachelor’s degree in 1949. Blackburn taught for several years after that, first in London and then in Berlin, and married Joan Mary Clift in 1950. Returning to London in 1952, he took over the management of Red Lion Books.

It was there that Blackburn began writing, and the immediate success in 1958 of his first novel, A Scent of New-Mown Hay, led him to take up a career as a writer full-time. He and his wife also maintained an antiquarian bookstore, a secondary career that would inform some of Blackburn’s later work. A prolific author, Blackburn would write nearly 30 novels between 1958 and 1985; most of these were horror and thrillers, but also included one historical novel set in Roman times, The Flame and the Wind(1967). He died in 1993.

Read more about this book and John Blackburn on our website:

Lovely to see this back in print - I've still got the original PB on my shelves.

His books have been a lot of fun to bring back! We also have his Elizabeth Bathory story Our Lady of Pain coming out later this year.

Mod
Will his books become available as ebooks?

Jon Recluse wrote: "Will his books become available as ebooks?"

Hi Jon, we have 8 of his titles available as eBooks. The rights for some of them weren't available for us to acquire unfortunately.

The Blackburn titles we do have as available as eBooks are:

The Bad Penny, Broken Boy, The Flame and the Wind, Nothing but the Night, The Household Traitors, The Face of the Lion, A Beastly Business, and The Cyclops Goblet.

Mod
Yeah, thanks, V.! I'm mostly reading on my Kindle these days. :)

Children of the Night (other topics)