note: This topic has been closed to new comments.
30 views
Archive's > places of us.

newest »
message 1: by [deleted user] (new)
Apr 28, 2014 07:00AM
So internett and goodreads is a international wonderness.
So I thought I`d make a thread where we could say where we all are from.. and if you want a small fact about that place.

I`m from norway. Northern norway. And actually in the 1600s people belived the devil lived where I live.

I'm from Ireland. I'm from a really rural area but living in Dublin.

EDIT: I forgot to include a fact.

Despite the fact that we are an island nation, we each comparatively little fish and seafood.

Hi guys!
Well, I am from India. I don't think there are many people from India in our group. Fact, fact, fact..... Uhh, I can't remember anything!

India was the first country who played chess.

Austin, Texas is my 'adopted' hometown for over a decade. We have the largest urban population of bats (Mexican free-tailed)and we are the 'Live Music Capital of the the World'. Our Capital building is the largest state capital building in the U.S. and made out of Texas pink granite. We get over 19 million visitors a year, which is more than Disneyland (14.7 million), more than the Eiffle Tower (6.7 million), and even Niagra Falls (14 million)! And a 'book' fact I LOVE -
Highest bookstore sales in the U.S. ($195 per household). A 'not-so-fun-fact', we have the largest herd of white-tail deer, even in our suburbs, and one of them took out a previous car of mine. Don't worry, the deer ran off just fine. We like to 'Keep Austin Weird' and 'Keep South Austin Weirder' 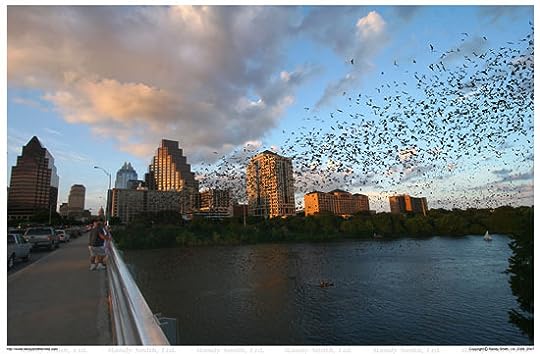 Mod
I really want to visit Austin someday, Alana, I always thought it sounded like a really cool city :)

I love it, but I don't recommend visiting during the summer, unless you are comfy with triple-digit heat. Everyday. Although, you can cool off in Barton Springs that are a constant 72 degrees year-round. 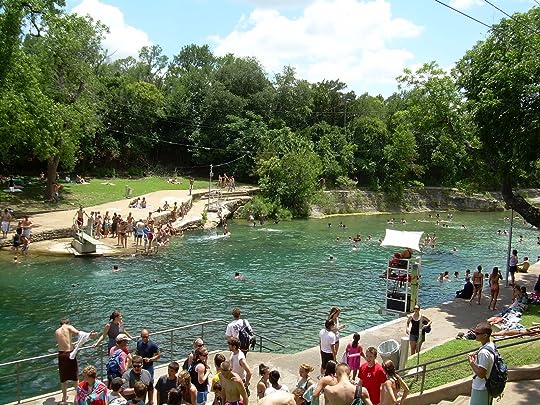 Mod
I'm from Iowa. Kind of boring, actually...although I'm sure I can spout off all kinds of facts that are somewhat interesting.

Grew up in Marion, moved to Story City when I was 14, lived in Boone with Darryl from the time I was 19 until I was 35 (except for a year in there where we lived in the small town of Luther when Alison was a baby) and now live in Radcliffe.

Marion doesn't have anything that interesting about it, other than its a great place to live, but its right next to Cedar Rapids--you drive across an intersection and suddenly you're in Marion. The biggest claim to fame of Cedar Rapids is probably Grant Wood. It is the only city in the world I believe that has its government on an island. That flooded a few years ago! But its all cleaned up now.

Story City is known for the 1913 Herschell-Spillman Antique carousel that's open every summer. Beautiful carousel, and actually my very first job :) I rode it when I was a kid, and then my kids did. Oh and also the theater, which used to be an opera house--Iowa's oldest continually running theater is in Story City.

I don't think there is anything really that interesting about Radcliffe, expect just south of it is a HUGE windmill farm. The windmills are beautiful, and kind of hypnotizing!

Boone is known for its trains, its an old railroad town. There is the Scenic Valley Railroad, a pretty big tourist attraction, and hosts Thomas the Tank Engine every fall. Its also known for Kate Shelley, and the Kate Shelley bridge that was named for her. And the dirt racetrack. Its also really close to Ledges state park, which is really really cool, and there are 4 different state camps in the area, and several parks. Its right on the edge of the Des Moines River Valley, so its a big recreational type of town.

Mod
Jenny wrote: "I'm from Iowa. Kind of boring, actually...although I'm sure I can spout off all kinds of facts that are somewhat interesting.

Jenny did you see that Mindy McGinnis is going to be in Ohio? http://www.mindymcginnis.com/news.html

Mod
Cool! Long ways away from me though!

Mod
Born in El Paso, Texas, so basically Mexico :) But I grew up in Pittsburgh, Pennsylvania, the home of Heinz Ketchup! Then I moved to Sydney, Australia for work and met my beautiful wife, Adele :) Four years later we're living in Hawaii!

David wrote: "Born in El Paso, Texas, so basically Mexico :) But I grew up in Pittsburgh, Pennsylvania, the home of Heinz Ketchup! Then I moved to Sydney, Australia for work and met my beautiful wife, Adele :) F..."

That's awesome! I hope I get the chance to travel one day! I especially want to visit Australia!

Born in Philadelphia, PA - home of the Liberty Bell. Now I live in New Jersey - true home of the Statue of Liberty.

Born in the crazy city that is Seoul, South Korea. Moved here when I was 5 years old. By here I mean Toronto, Ontario- home of the Blue Jays, the CN Tower, Canada's Wonderland, a short drive to beautiful Georgian Bay and Muskoka, as well as Niagara Falls.

Victoria Woodhull, the first woman to run for U.S. President in 1872, was born in small town I where went to elementary school in Homer, Ohio.

I was born in Canada - Alberta to be exact, lived there for awhile and then moved to Saskatchewan. Not much to say about Saskatchewan (very flat!) But Alberta, if you go to the right places it's a beauty. When I was 13/14ish I moved to the States - North Dakota which isn't to far from to Canadian border and that's where I am now c:

@Joycedale--which part of Missouri is that? I might have been there, been through Missouri a lot!

@David--Darryl is OBSESSED with ketchup. And he usually buys Heinz. The man can't live without ketchup. But he can't stand tomatoes. Go figure.

@Jenny omg I just burst out laughing. Yes, North Dakota certainly isn't a place I plan on staying that's for sure.

LOL! I only eat Heinz ketchup, that's one of the few things I'm snobbish about :)

Mod
Ok, here goes... Made in France. ;) Born in South Carolina. I was an Air Force brat so traveled and lived in Canada, Germany, Italy, England, and ALL OVER the U.S. of A. I went to 19 different schools up through high school and even graduated high school a half year early graduating in Altus, OK.

I finally settled down in Scottsdale, AZ about 32 years ago. Fun fact: The Sonoran desert, part of which lies here is North America’s hottest desert and is 120,000 square miles in size. England could fit two times over in that space. I live in the original "Fire Country"! ;)

@Daniel--Toronto is actually not that far from me, almost straight north, but I've never been to Canada. I hear its..."

LOL you definitely have the right to be, can't blame you there! I just went and counted, and we have 5 bottles of Heinz Ketchup in our kitchen...2 in the fridge--Darryl has his own bottle, and there is another bottle for me and the kids--and 3 more in the cupboard. The world would end if we ran out of ketchup!

Mod
Karen wrote: "Ok, here goes... Made in France. ;) Born in South Carolina. I was an Air Force brat so traveled and lived in Canada, Germany, Italy, England, and ALL OVER the U.S. of A. I went to 19 different sch..."

David wrote you your very own world, isn't he sweet? HA!

Its southwest Missouri, about 25 miles from Springfield.

We have the most theater seats per-capita after NYC. :)

I'm from Wisconsin, which per-capita outdrinks (alcohol consumption) everywhere in the WORLD except a few small villages in Germany.

Mod
The Twin Cities!! Have been there many, many, many times :) For many different things, although a lot of family weekend type trips. My parents love Minnesota! In the summer, anyways :)

Been to Wisconsin a few times, too. We used to go watch Spring Training of the Chicago Bears when I was young. My parents (my whole family) are big Bears fans! Madison is a really beautiful town as well :)

Oh my gosh. YOU LIVE IN BOONE JENNY!? Oh my gosh. You might know my friends crazy parents.

Haha. Anyways. The only thing I like a lot about Iowa is Iowa City... which is no where near Marion or Cedar Rapids except both are in Iowa :P

Mod
I USED to live in Boone, for a long long time. It is a town full of crazy people! One of the reasons I love it! Its never boring, and for a town in Iowa, that's saying something!

My favorite town in Iowa is Winterset...so so beautiful there!

When I was a teen my parents had to drive from wisconsin to Iowa City for the eye clinic there for a special retina guys because they couldn't figure out what was wrong with my eyes. So we would spend a few days there since we had to drive anyways eating and having fun because it was usually every 6 months minimum for 3 years and was like a 5.5 hour drive one way.... So I would get to skip school to go on a mini vacation to have my eyes tortured but have a lot of fun in a quaint little college town :)

@Daniel--Toronto is actually not that far from me, almost straight north, but I've never been to Canad..."

LOL! Of course I did, Karen is awesome!

We have the most theater seats per-capita after NYC. :)

I'm from Wisconsin, which per-capita outdrinks (alcohol consumption) everywhere in the WORLD except a few small villages in..."