[Stuff and stuff, consisting of at least 2 paragraphs]

[Stuff and stuff, at least 2 paragraphs or more]

name:Amanda (Am) Crispin
age:17
appearance: really tall, really thin. has blonde-red hair(it's more red than blonde) in a messy high pony tail. harshly pretty, kind of like the person below me.sad green-gray eyes. rather pale.thin pale-pink lips.
personality: she seems shy, but if you know her, she turn out to be REALLY outgoing.very sarcastic. she is out going, but doesn't really let people in. she feels like she doesn't need friends.
gender:female
sexuality: Heterosexual
relationship status:open but really doesn't like any one
history: she was born in the future and had a normal life. then, when she was 10, her older brother went to terra nova. or tried to, he died in the portal.her parents eventually died of greif. to go to terra nova to seek revenge for her family, she did all she could.she eventually learned how to sing(if those are the talents you mean) when she got there, she became a sixer
other: her brother was her only friend. ever. 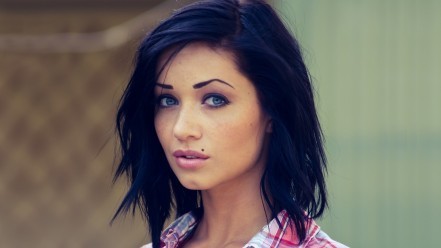 As soon as you first meet Adara, the first thing you notice is her lack of choosing a side. Most people who aren't her friend find her with a neutral kind of personality; Someone who never chooses a side. This, out of all things, bugs Adara the most. She always wants to agree with one person, but she always wants to agree with another. So when it comes to a big decision, Adara will stay neutral unless she's forced to choose.

To people who she's more comfortable around, Adara is the kind of person who'll be a little set back and doesn't say much. She'll avoid making even the biggest conversations, but she'll stick her head into small side conversations.

Besides her neutral standard and slight quiet personality, Adara is the expert persuasionist and spyful type. She's also more of the stealthy type, which she has the habit on accidently scaring people with her quiet steps. Though besides these great fractions that make up her personality. Adara is loyal, Sweet, and the last person you'd expect to be a spy.

Adriana Beronica Calvera grew up in the world of filth for the first few years of her life, living in the вҖңgoodвҖқ parts of whatever civilization existed. With a good childhood, Adara was then chosen to go to Terra Nova due to her great expertise in the skill of hacking, which could fix the sixerвҖҷs ability to hack the Terra Nova technical mainframe. Adara was only chosen to go because she hacked into fort knox for the enjoyment of her peers. The only flaw to this was that her parents had to stay behind, due to law that only a kid could go if the child was chosen. AdaraвҖҷs parents objected, saying they had a right to go since it was there kid, but the government easily closed them out and took custody of Adara.

At the age of 13, Adara arrived in Terra Nova as an underaged spy extraordinaire. Basically one of the few underaged citizens to have anything to do with the military forces. After nearly three years behind a desk, looking over archived plans about Terra NovaвҖҷs foes, Adara began service as a spy at the age of 16. Taking the name as Maeve Lee, She slipped into the sixer forces with no problems. For the next year, Adara would gather crucial information and never was expected of treason to the Sixers.

But after a large request from the Terra Nova officials, Adara loses control of a mission and gets caught by the leader of the sixers, Lucas, personally. After about two months with a вҖңNo ResponseвҖқ interaction with Adriana, Adara was pronounced MIA. But really, she was persuaded into the Sixer ranks as a top notch intelligence officer and high class spy.