Mod
Here's the topic to begin discussions of your impressions of the novel. No spoilers, please.

My first impressions: Russell is a marvelous writer. The story begins with one of those great first sentences, Our mother performed in starlight. And then how easily it becomes creepy. Also very unique story.

I am not sure this is my kind of book. It's a little too cute maybe. But it does remind me of our family Easter trips to Indian Rocks Beach on the Gulf coast when I was young in the late 1950s. Driving before the Interstates were finished from Michigan through the South was a big part of the experience as we saw segregation and poverty out our car windows for the first time in my young life.

Mod
My most magical vacation as a child was to Florida. It was a time I believed in mermaids. The mermaid attraction at Kissimmee fascinated me. Riding on the glass bottom boats of Silver Springs was a special treat. I saw a supposed Seminole wrestle an alligator. Watched Ross Allen milk deadly snakes to make anti-venom.

So my initial impressions of Swamplandia! revive those childhood remedies. There were gator parks aplenty. And Tommy Bartlett's Deer Farm.

Walt Disney World put many Mom and Pop tourist attractions out of business. Of course the interstate system also took its toll.

Following is a website for Florida's lost tourist attractions. It gives an excellent overview of what awaited the Florida tourist: http://www.lostparks.com/ .

Russell's wry description of the super theme park as the World of Darkness strikes me as a parody of Disney. Kiwi's "adventures" supply the comic relief in the novel.

As Flash Beagle said, the novel easily turns from quirky to creepy. The Ten Thousand Islands area of Florida includes Chokoluskee Island, the setting for Shadow Country. Of course there's no mention of Mr. Watson.

I finished the book quickly and will reserve other thoughts for final impressions.

I enjoyed reading this book a few years back in preparation for a master class I sat in on, taught by Karen Russell. She is a very kind and generous writer, but she's too young to have experienced Florida pre-Disney. That she captured so much of those quirky, quaint experiences made it great fun for this real Florida native.

Thanks for that lost park link, Mike! It brought back memories of school trips - to the passion play in Lake Wales and the Cross and Sword play in St. Augustine, or visiting the Fred Bear museum in Gainesville and Six Gun Territory in Ocala. Some of those "lost" attractions never really "found" enough suckers, er, tourists, to pay the bills - Splendid China, or Skull Kingdom fall in this category. But never fear, we still have our fair share of mom and pops. Here's a photo of the kids at the entrance to Gatorland a few years back! 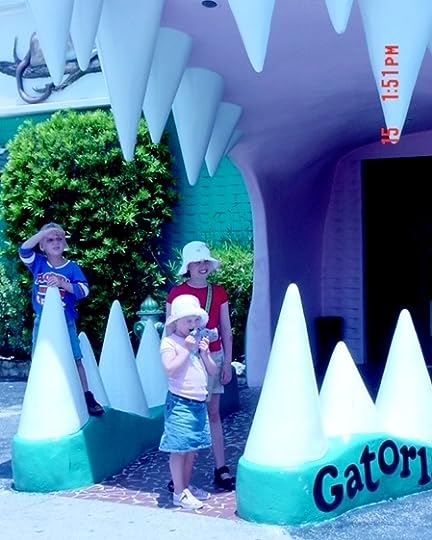 Mod
Thing Two wrote: "I enjoyed reading this book a few years back in preparation for a master class I sat in on, taught by Karen Russell. She is a very kind and generous writer, but she's too young to have experienced ..."

Now that's a great shot! I enjoyed the lost parks site. I remember being mobbed by small deer at Tommy Bartlett's. We would pull into orange groves where the growers squeezed the juice from the oranges pulled off the trees. I don't think I ever had better. Minute Maid never came close. *laughing*

I am about halfway through Swamplandia! and it has taken me outside my comfort zone. I want to bring the book more inside my normal rational state by understanding more about Magical Realism. I guess that is what this book is!

When I realized there was a ghost in this book, I was put off, didn't much cotton to the idea. Then Ossie tells the story of how the teenage boy died to become a ghost. I thought, "Oh, this is just the story of a teenage boy and what happened to him in the past." He seemed real and not at all a ghost so I put the ghost part of him away. And maybe I began to understand just a bit about Magical Realism. But I had to play a trick on my mind.

Ava being 12 also puts the book out of my comfort zone because it seems like she might really BE a child. I have not been a child in a long time so it is a stretch to take on that identity.

And then there is the Bird Man, presented as a real living person, but about as unreal as a character can get. And he takes Ava into what seems pretty much to be an unreal world.

I thought I was going to take a trip into the Everglades but instead I find myself in this magical world with this most odd cast of characters, none of whom seems at all plausible to my rational self except maybe the 12 year old whose real world is somehow magical.

I only chose to read Swamplandia! because it is the book for May. In an earlier post I referred to it as maybe "too cute" for me. That was the rational me!

Thing Two wrote: "I enjoyed reading this book a few years back in preparation for a master class I sat in on, taught by Karen Russell. She is a very kind and generous writer, but she's too young to have experienced ..."

Awesome pic! I haven't experienced Florida like you guys have but for the past two years I've been there twice a year for classes and like you, I've sat in s master class taught by Karen (who is awesome by the way). I feel as though I'm learning some things about those theme parks--as Mike mentioned, it does seem like a parody. And according to her, this is some of what she was going for.

Mod
I'm still waiting on my copy from library. It may be June bf I get to it. Ugh!

Mod
I'm 25% in and I'm still not interested in what's going on. Hoping for a turn in my interest. I'm not drawn to the characters or the plot.

Mod
Laura, one of the reasons I passed on this one is that a lot of my friends who read the book said the same thing. I usually make up my own mind on a book, but these were people like yourself, who have the same reading tastes as me, and I respect their opinion. No offense to the people who did like it, and obviously there are many, but no book is for everyone.

Diane wrote: "Laura, one of the reasons I passed on this one is that a lot of my friends who read the book said the same thing. I usually make up my own mind on a book, but these were people like yourself, who ..."

I appreciate and also agree with your comment. I don't always read all the books we have on our OTSLT list but I still feel guilty when I do not. Your comment makes me feel better.

Beverly wrote: "I don't always read all the books we have on our OTSLT list but I still feel guilty when I do not."

For those interested in statistics, there are 716 members of this group. 41 voted in the selection of this May read and 8 voted for Swamplandia!. I do not see how many people in the group have actually read the book but I would say you are a part of the vast majority who have not!

I have had many books and authors brought to my attention through this group. That is the biggest benefit to me. But my decision to read a book any particular month can be a complicated process, and not necessarily totally rational. I read Swamplandia! mostly because I found a copy on the library shelf and decided it was meant to be! Not a process to be recommended, it turns out but certainly not a disaster. Every book I read adds something to the mix.

Mod
Finished the book but really struggled. No interest in the characters or the plot. I'm glad others enjoyed the book.