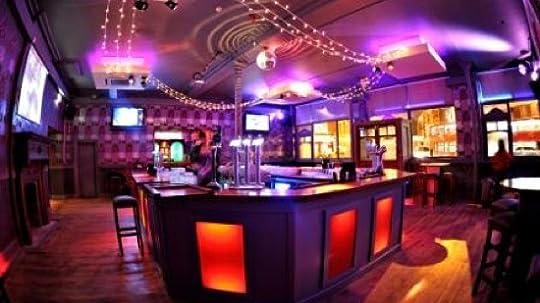 Shyla sat at the counter, drinking some red wine.

Mod
((Not necessarily yours, we just needed a pub lol! I can make a separate one for Luke's))

Mod
Amaterasu landed outside the pub and reverted to her human form. She dressed herself in a light long flowy dress with long dark blue hair. It was night, so she had to take this form. She ushe opened the pub door and looked around inside. Walking over to the bar, she asked for a drink.

Shyla glanced at the person who now sat next to her as she took a sip of wine.

(wine is a frequently occurring thing with my charries)

Amaterasu, now calling herself Haruki (which was a her first name too) had masked the level her magic. Being the first Creator, she had the ability to be completely undetectable. To anyone who saw her now, she was just an ordinary human. Maybe a magical human, but nothing like an angel, or a demon, well, the extent of her aura sometimes had others mistaken her for a demon, but that was because when you're the ultimate Creator, one can never be too pure. She took the pineapple juice she'd ordered (yes, she was not an alcoholic drinker, don't ask why she came in here), and sipped it.

Mod
((egghhh the pic links didn't work, and oh yeah this was the character I liked!))

"you look familiar" Shyla said to the woman next to her, she couldn't be sure but she reminded Shyla of someone. her aura was that of a simple human with slight magical skills but something seemed off.

= Nina = wrote: "((Not necessarily yours, we just needed a pub lol! I can make a separate one for Luke's))"

Ace stood behind the Pub's bar. Each of Luke's followers took turns takeing care of the bar. Today was his turn.

Mod
Haruki turned to the woman next to her with amazing purple hair and faded red eyes. She considered the woman. She smiled, "Do I seem familiar? Someone always seems to be telling me that." She didn't say that it was because the Creator was everyone, in a manner of speaking.

"yes, you seem like someone I've always known as well as someone I would never meet, it's strange." Shyla admitted, this woman almost reminded Shyla of everyone she knew and several people that she just glimpsed but didn't really know.

(write in brakets whenever ace is mentioned cause i aint reading soemthing not related to me cause it hurts my eyes...)

Mod
((Lol post something, it's your turn and then I can bring Ace in properly in my post))

Ace made them their drinks and took it to them.

Mod
Haruki looked at Ace and smiled broadly, she was somewhat very bored with life, that's why she came down to earth. "Thank you," she said looking up at Ace.

Ace nodded to her,

Shyla nodded in apprecitation as she took her drink. "do you know a very popular drinking song that many bars know?" Shyla asked the woman next to her.

Mod
Haruki turned back to the woman next to her, she had ignored what she'd said earlier, because she was distracted. But now her attention was back, "I don't drink." She pointed to her pineapple juice, "but maybe the bar guy knows?" Looking back at Ace, she said, sweetly, "Do you have a name handsome?"

(sorry i had to switch to pgone...and i am free all day yomorrow)

Mod
((Excellant!!! I'm going to send out a message to everyone later then!))

Axe looked at her. Luke told him that part of his job as a pub person thingy was to talk to the customers. they had all laughed, saying that Ace could never shake off his dissdaneful mask. He had almost killed Nytmare in his anger. Luke seemed emotionless as always....Ace feared he had upset him but nohing moved luke.

With this in mind, Ace forced a smile, turning to the women/gal "Ace Frost, at your service. What might be yours?" he hoped it didnt sound too forced.

Shyla reached a hand into her pocket, noting that the question wasn't directed to her.

Mod
Haruki smiled, a smile that didn't match her eyes, "Nice to meet you," she said coolly, "but you need to work on your people skills. I'm Haruki." She introduced herself to both Ace and the woman next to her, who she asked, "who are you?"

Ace frowned to himself. This was why he almist begged Luke to put anyone but him behind the bar. Luke, as always, was unimoacted by his pleese.

"i'm Shyla" she said as Shyla tossed a coin over to a guy across the bar who looked up at her and nodded. he signalled to a violinist who began to play slowly as he stood up.

"there's an inn of old reknown, where they brew a beer so brown. the moon came rolling down a hill one heavens day night to drink his fill." the man began to sing then two other men on the other side of the pub stood up and sung in unison as the first man took a pause and some other drinkers began tapping there glasses with forks.

"On a three-stringed fiddle there Played the Ostlers cat so fair The hornd Cow that night was seen To dance a jig upon the green. Called by the fiddle to the Middle of the muddle where the Cow with a caper sent the Small dog squealing. Moon in a fuddle went to Huddle by the griddle but he Slipped in a puddle and the World went reeling. Downsides went up- hey!outsides went wide. As the fiddle Played a twiddle And the Moon slept till Sterrenday. Upsides went west- hey! Broadsides went boom. With a twiddle on the fiddle In the middle by the griddle And the Moon slept till Sterrenday." they sang then they took a pause as the violin played a little solo.

the second two began to drink as the first man sang again. "Dish from off the dresser pranced, Found a spoon and gaily danced." he then took a swing at his beer as one of the other two men began to sing again.

"Horses neighed and champed their bits For the bloodshot Moon had lost his wits." the man sang and then began to drink his beer as the third man began to sing.

"Ostler cried, ?Play faster, Cat!" the fourth man sung as the other three stopped drinking and joined in.

"Because we all want to dance like that." they all sang as a group "Gambol and totter till you're Hotter than a hatter and you Spin all akimbo Like a windmill flailing. Whirl with a clatter till you Scatter every cotter and the Strings start a-pinging as the World goes sailing."

they then began to dance towards each other as another violin solo was played. when they all stood as a group they turned to the rest of the pub and started a chain where they would sing and the pub would follow.

"Hotta-cotta-hotta-cotta-mi-fo-fo" the bar sang and then both groups sang together as the bar stood up to sing and dance.

(here's the song for reference-https://www.youtube.com/watch?v=CTTwp...)

(sorry if I put too much)

Mod
Haruki was a little stunned by the sudden music, and she could tell Ace looked uncomfortable full stop. But she held her peace. Looking at Shyla she said, "Nice to meet you." Looking back up at Ace, she eyed him from under her lashes, now she hadn't found something interesting to look at for years. "You should join us, sit and make light chat."

Mod
Maveric wrote: "(sorry if I put too much)"

(I just wanted to make sure that you saw what I wanted.)

Mod
((We'll see if I got what you wanted to show lol, COOKIE's turn.))

(yep, what happened to Cara and Aeliana talking to the bunny by the way?)

Ace had zined out for a biy, enjoying listenig to the music. He ignored the words since he hinself didnt understand how someone could love alchahol, but he listened to the violin.
He words brought him back to earth netaphorically.
(just in case i have to leave)

Ace frowned again. snall talk. In his nany years he had never been able to donsuch.
He remained behind the bar but tried his best to be less anti-social.
"um...where are ...are you from?" wasnt that what you were ment tonsay in a cinversation? right?

Shyla took another sip of her wine.

Mod
Haruki smiled lightly, amused, "Earth, where are you both from?" She was also referring to Shyla.

"i wasn't born." Shyla said simply, she turned in her seat to look at them better than the corner of her eye.

(have they at least met?)

Ace forrowed his brow and cocked his head a fraction.
"..earth? i guess...." Ace felt likenhe missed something...wasnt the reply ment to be likem..a city? Was it ment to be funny? a joke or something? Ace wasnt very good with humour.

Mod
((No. Because the bunny aka Maveric was not around to start talking, but Aeliana is prepared to leave hell with Romano at any moment.))
((@Cookie, I can start early, 10ish if ya want, but you need to give me a suitable time, so I can warn everyone before hand))

Haruki smiled to herself, that's right, Shyla was a Reaper. "That's right, you were created," said Haruki, she looked over to Ace, "Confused?"

"i think he is." Shyla said as she slipped a piece of folded paper to Haruki.


Ace's eyes had widened whens he heard what she said. Then caugjt himself, summoning a confuzzled expression. "..yeaj" reaper....:/