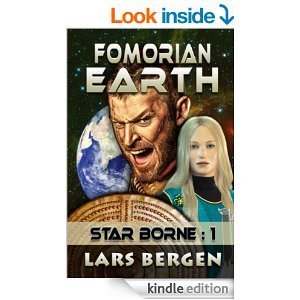 Fomorian Earth is speculative science fiction, inspired by the Celtic mythology of the Tuatha dé Danann and Fomorians of ancient Ireland. Today, ancient astronaut theorists suggest that both the Fomorians and the Tuatha dé Danann were extraterrestrial astronauts from another star system, and it is from this possibility that the Star Borne epic series comes to life. Interweaving historical fact with science fiction and fantasy, Fomorian Earth brings to life the power struggles, bloody human sacrifices, and treachery of an Earth before Humans became the dominant species.

1500 BC — The Isle of Destiny is dominated by Fomorian giants who rule over Humans with an iron fist. The giants are untouchable until the starship Vireo, carrying an advanced race of humanoids, comes crashing to Earth on the eve of Samhain, the bloodiest pagan festival of the year.

The Fomorian giants interpret their arrival as the prophesied Destroyer. Fomorian mission: seek and destroy whatever fell to Earth. Starship mission: stay alive.

Caught in the midst is ship's officer Brigit, stranded on Earth on the way to her wedding, and one of the barbaric giants has his eye on her. These barbarian giants won't hesitate to throw you into the sacrificial fire to honor their god Moloch, and they'll cut off your nose if you don't pay tribute.

Will Brigit be rescued by her fiance in space, who desperately searches for the lost starship? Or will she fall into the hands of the barbarian giants, ruled by Balor of the Evil Eye?

Five humanoid races are plunged into a battle for supremacy, as a child of prophecy lives hidden in the shadows, waiting to fulfill his destiny. On the day of reckoning he makes one vow: Today, you will die…