One Year In Search of Lost Time ~ 2015 discussion

"That girl with the very deep-set eyes and the drawling voice, is she here? And if she really does repose here, then do we any longer know in what part, or how to find her underneath the flowers" (~59.82%)

I hadn't noticed that this last volume is only around 370 pages, until after i noticed how fast it flies by compared to the others. A unique Ebook-without-page-numbers experience i guess.

I loved Proust's essay on art and specifically literature that starts in this section and continues through week 4's part.
This looks like his central outlook on art over life, and why the narrator needs to write this book, or why Proust made it pretty much his only life's content to write ISOLT in his final years.

"Real life, life finally uncovered and clarified, the only life in consequence lived to the full, is literature."

"Thanks to art, instead of seeing only a single world, our own, we see it multiplied, and have at our disposal as many worlds as there are original artists"

I believe it's here that he also explains his views on friendship, something he touches on much earlier, which I know we debated about at the time.

I've just been reading this part and am again puzzled by Proust's views on love and friendship. He keeps on arguing that these are things we construct/imagine for ourselves, and that they have nothing to do with the reality of the other person - at one stage saying you might as well talk to furniture as to a friend.

And yet, for instance in his portrayal of Robert, there is a moving passage where he looks at how their friendship grows and changes over the years. All this clearly relies on both their characters and wouldn't have been the same if he had befriended someone else.

Lovewise i think he means that we fall in love with an image of a person we have constructed ourselves, which can't fully correspond to the real person, because we don't know much about them yet, so in a way it doesn't matter what that person is really like. And maybe it's similar for friendship.

There's definitely some two-sidedness to his views on friendship and love, for one he devalues them philosophically, but he also lives them fully, because he can't help wanting and needing them.

Simon wrote: "Lovewise i think he means that we fall in love with an image of a person we have constructed ourselves, which can't fully correspond to the real person, because we don't know much about them yet, s..."

Yes, and to add to the complications, one's "old self" may be dying and you don't even trust, or even know, your current state of mind.

Aside...a fault of mine is looking for the kaleidoscope glass-fragments of Proust's personal life.

Here is de Botton's take on Marcel's friendships, and his need to be liked and accepted, as you pointed out Simon.

Proust's overwhelming priority in almost every encounter and letter was to ensure that he would be liked, remembered and thought well of. "Not only did he dizzy his hosts and hostesses with verbal compliments, but he ruined himself on flowers and ingenious gifts," reported his friend Jacques-Emile Blanche, giving a taste of what this priority involved. His immense psychological insight was often wholly directed towards identifying the appropriate word, smile or flower to win others over. And it worked. He excelled at the art of making friends, he acquired an enormous number, they loved his company, were devoted to him and wrote a pile of adulatory books after his death with titles like My friend Marcel Proust (a volume by Marcel Duplay), My friendship with Marcel Proust (by Fernand Gregh) and Letters to a friend (by Marie Nordlinger). The accounts of these friends tell us:...
http://frenchculture.org/books/blog/p...


Typing as the helicopters are flying, continually, overhead on this festive night. Eventually, we will walk to Central Park, where there is a Midnight Run and a terrific firework display. It's the antidote to the Times Square madness, as you can actually be alone.

I can imagine Proust in Central Park...similar to the Narrator and Albertine's last carriage ride in Versailles.

...when I had asked her to come out with me on that melancholy occasion which she was to describe in her last letter as “a double twilight since night was falling and we were about to part,” she had flung over her shoulders a Fortuny cloak which she had taken away with her next day and which I had never thought of since. It was from this Carpaccio picture that that inspired son of Venice had taken it, it was from the shoulders of this Compagno della Calza that he had removed it in order to drape it over the shoulders of so many Parisian women who were certainly unaware, as I had been until then, that the model for it existed in a group of noblemen in the foreground of the Patriarch of Grado in a room in the Accademia in Venice. I had recognised it down to the last detail, and, that forgotten cloak having restored to me as I looked at it the eyes and the heart of him who had set out that evening with Albertine for Versailles, I was overcome for a few moments by a vague and soon dissipated feeling of desire and melancholy. MP 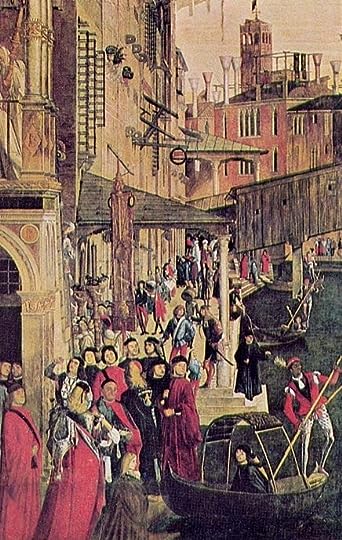 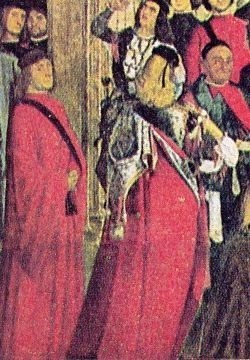 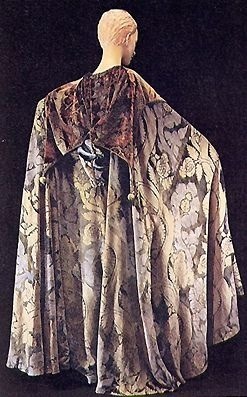 This Fortuny cape echoes the Carpaccio, with the free-flowing fabric and the tassled hood.
http://www.marcelproust.it/proust/car... 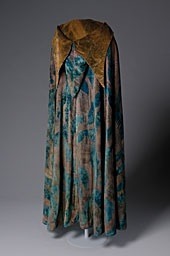 Saying goodbye to 2015, with arguably the saddest quote in the novel:
“a double twilight since night was falling and we were about to part,” Alfred Agostinelli
https://books.google.com/books?id=aYa...

Many thanks, Simon and Marcelita - and Happy New Year to you and all in the group! Simon, I think your description of Proust's view on friendships and "how he devalues them philosophically, but he also lives them fully" seems absolutely right.

Marcelita, those photos are wonderful and the passage about Proust's real-life friendships is very interesting as a counterweight to his sometimes dismissive comments on friendship in the novels. Yet another wonderful contribution.

I hope you had a great night at the fireworks, and also wish a Happy New Year to all.