Name: Adrian Magus
Species:Half-Blood Spellcaster
Age:21
Gender:male
Rank: none
Personality:wacky and silly, he rarely takes anything seriously. even when faced with life or death situations he often makes jokes, often times really bad ones. despite appearances he is very clever, although he'd rather no one knew about it. he is very loyal to those he cares about, often putting his own life on the line in order to protect them. although hard to anger, once he gets there he becomes a force of nature and won't stop until he eliminates whatever drove him into such a rage. a quirk of his personality is that he won't hit girls, but he will destroy an enemy and enemies have no gender in his mind (a odd but useful distinction).
Human Appearance: 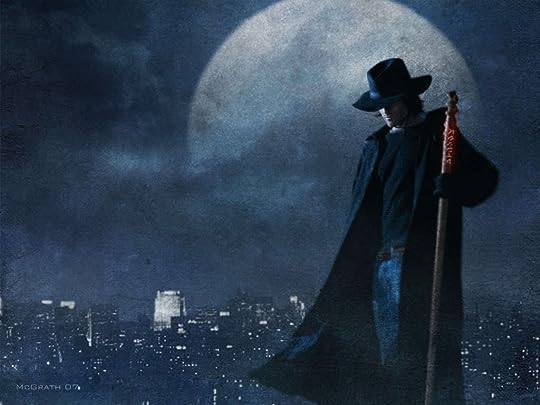 has wild black hair and bright purple eyes.
True Appearance: stands roughly 9ft tall and is a bipedal hybrid of human and dragon. is covered in black scales, as massive leathery wings, sharp talons and claws, a long and very deadly tall, long and very wild black hair, and his bright purple eyes, although they now have cat-like pupils. while his face is more elongated than a normal humans its more exotic than horrific.
History:born to two half-blood parents, he has lived almost always on the run until he learned to keep a human form. he eventually learned magic and stopped hiding, he even invited various slayers to try and kill him. whether believing it to be a trap or believing such bravado meant he was exceptionally powerful none showed up and he has been left mostly alone. he has started hiring himself out as a slayer, although it is just so he can find the actual big-time slayers and eliminate them.
Family:only Andrax the Vast is alive, his dragon ancestor.
Crush/Mate/Date:open
Children:none.....hopefully
Powers (if any, max is 2, they have to balance each other):he is capable of manipulating most types of magic, however it sometimes does things he doesn't want it to and he acts like a magical beacon, anything with a drop of magic knows exactly where he is, if not what he is. since he can manipulate most magic he, unlike other hybrids, has no dragon form.
Likes:reading, slaying monsters, jokes, parties, etc.
Dislikes:party poopers.
Other: