Mod
Name: Harrison George Wells. ( some people call him Harry or Wells.)
Speices: Human/Angel. (Deal with it.)
Age: 35
Power/abilities: Genius-level intellect/Great business acumen.
Expert tactician/Manipulator/Negotiation
Expert hand-to-hand combatant
Expert Speed Force User.
Weapons: His fists and smarts.
Crush: Karen.
Relationship Status: Single.
Sexuality: Bisexual.
History: He's was the head mind of STAR Labs before it exploded and caused him and tons of other people to gain powers. Harrison was put in a coma like another person was (Barry) and when he woke up 3 weeks later Star Labs was closed down and people's trust in him gone. He came here with a hope to let all that go and just do what he does best....being a Doctor.
Appearance: http://images6.fanpop.com/image/photo...
http://images6.fanpop.com/image/photo...
http://images6.fanpop.com/image/photo...
https://www.google.com/imgres?imgurl=...
Extra: he's serious, calm, quite a goofball when he wants to be, kind,
Family:
William Wells. (Father,Dead)
Cassandra Wells. (Sister,Dead?)
What are they from: Dc/Flash Cw.
Job: Doctor.
Has these Wings: https://www.google.com/imgres?imgurl=...

Mod
I approve myself

Mod
When his tiny he can run faster then a normal human but not as fast as a speedster.

Oh then he is APPROVED

Name: Hatter Madigan
Age: Unknown (I don't know how old he is.)
Power/abilities: He's a millenary
Weapons:
His hat
Backpack
and flip blades on his wrists.
Crush: No one
Relationship Status: Single
Sexuality: Straight
History: he is the Queen's bodyguard and the leading member of Wonderland's elite security force, The Millinery. During Redd's attack on the Palace, Hatter is given one last order by Queen Genevieve: to watch over Alyss until she is old enough to rule. Unfortunately, their escape from Redd's coup through the Pool of Tears goes awry and Hatter ends up in Paris (while Alyss emerges in England) with no clue as to the fate of the young girl he has been charged to protect. He spends the next thirteen years searching for her, intent to keep his promise to Queen Genevieve. He is an expert bladesmen, and his hat can flatten and split into S-shaped blades which is used like a boomerang fashion. After finding Alyss, he returns to Wonderland to help her in defeating Redd. Hatter Madigan has his own comic book series regarding his adventures searching for Alyss. He then watches over Nikki protecting her from anyone/thing that threatens her.
Appearance: ((Ignore the book title)) 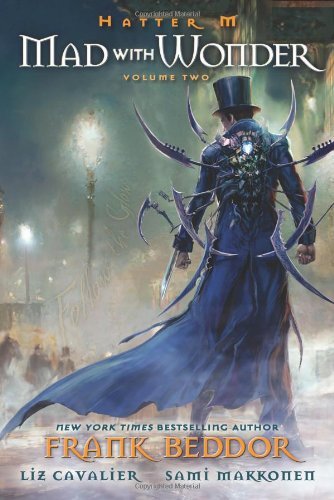 What are they from: The Looking Glass War series
Job: Grounds protecter
((And he protects Nikki))