The Grapes of Wrath for americas or nobel prize laureates

Tales of the Unexpected short story

Nobel prize lureates or europe For Whom the Bell Tolls

The above may change.it all depends.
Also
The Lord of the Rings fantasy

Reread Persuasion for 1800s
The Pilgrim's Progress .~40% now
The Mysteries of Udolpho maybe. Read in many books..

My country prize winners Rabindranath Tagore.
Or The God of Small Things

Foriegn literary prize The Bridge on the Drina

I enjoyed "Grapes" when I read it with this group--my first read.

I read "Middlemarch" just before I joined GR and liked it enough to do a second reading on the heels of the first read of it. If you decide to read these books, I hope you enjoy!

Thanks kathy and andrea....

Level One Bingo
Four Corners: Mark off the four outside corners of the Bingo board.
Five-in-a-Row: Mark off five squares in a row. This can be done horizontally, vertically, or diagonally.

Level Two Bingo
Small Box: Mark off all the 9 inner squares of the board (including the free square), leaving blank the 16 outside border squares.

Level Three Bingo
Outside Box: Mark off all 16 of the outer squares, leaving blank the 9 inner squares.

Level Four Bingo
Blackout! Mark off all the square

Hoping to make some dent in my tbr

Looking good with your plans so far...good luck!

Pink wrote: "Looking good with your plans so far...good luck!"

This is my first year for this challenge. I came across Rabindranath Tagore and his books which are completely new to me but thinking about using one of his for my Poetry square or Asia/Oceania square...

Have you read his books? Any sugestions as a good one to start with?

Looks like a lot of us will be reading Middlemarch in 2016!

Andrea (Catsos Person) is a Compulsive eBook Hoarder wrote: "I enjoyed "Grapes" when I read it with this group--my first read.

I read "Middlemarch" just before I joined GR and liked it enough to do a second reading on the heels of the first read of it. If y..."

I started middlemarch this year and paused..as i got distracted...hoprfully not so next year...
Most of the authors are new to me.....hopefully i will be able to read at least a few

I really liked "Middlemarch" and "Grapes of Wrath" when I read them.

I read grapes "Grapes" with this group and read "Middlemarch" just before I joined GR. I hope you enjoy!

siriusedward wrote: "Can we start reading the books now???"

no, no, no hehehehe Don't worry patience was never one of my virtues either.

I think i will start the next year with
The Lord of the Rings & Middlemarch....

So....started both LOTR and middlemarch,....today...liking the style of LOTR so far....but middlemarch....not liking the 2 sisters much..will take some time to get into the story i guess..

Middlemarch is going to be slooow read.not liking anyone in it.till now.

The Lord of the Rings . liking it so far.fairly good pace when life doesnt interfere.

I will take my own sweet time with Heidi
Rereading it.so will do it slowly and enjoy.

I think Persuasion is my favourite Austen.

Good luck with Middlemarch, it is slow, like most long victorian novels, but I really got into it. I think I was helped by listening to it on audiobook too.

Mod
I need to read some Jane Austen this year.

I like that LOTR speeds up once you get out of the Shire.

Thank you pink.my favorite austen is p&p and persuasion.loved both.

I want ro read northanger abbey .did not read this and emma and lady susan.

Andy Adams' Campfire Tales or The Log of a Cowboy: A Narrative of the Old Trail Days
by Andy Adams

or Astoria by washington irving

I want ro read northanger abbey .did not read this and emma and lady susan.

I'm now listening to Pride and Prejudice and I think it might be a joint favourite with Persuasion. Northerner Abbey is close behind too.

It is mine.will read northanger abbey sometime this year...

Northganger Abbey is on my list for this year too...I read both P&P and Persusion last year.
Persuasion is my favorite so far...

Susie wrote: "Northganger Abbey is on my list for this year too...I read both P&P and Persusion last year.
Persuasion is my favorite so far..."

Ideas
To the Lighthouse by Virginia Woolf

The Name of the Rose by Umberto Eco

The Sound and the Fury

Selma Ottilia Lovisa Lagerlöf (Swedish: [ˈsɛlˈma ˈlɑːɡə(r)ˈløːv]; 20 November 1858 – 16 March 1940) was a Swedish author. She was the first female writer to win the Nobel Prize in Literature, and is best remembered for her children's book Nils Holgerssons underbara resa genom Sverige (The Wonderful Adventures of Nils

Well done on your completed books. I've been considering The Name of the Rose, since someone suggested it to me for one of my challenges and I think it's currently nominated for a group read, so maybe I'll get to it soon too.

It sounds good.like a historical fiction.so i thought maybe i will give it a try...

Quite apart from Bingo.it has helped me read more classics... :) 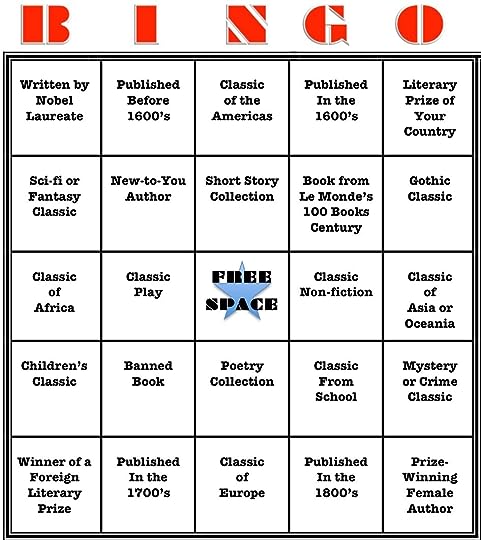 http://www.destination360.com/europe/...
https://wrex2009.wordpress.com/2010/1...
http://www.postmodernmystery.com/name...
First published in Italy in 1980 as Il nome della rosa, William Weaver’s English translation of author Umberto Eco’s The Name of the Rose appeared in the United States in 1983, and in England in 1984. The novel, with its labyrinthine plot, deep philosophical discussions, and medieval setting, seemed an unlikely candidate for worldwide success. Yet by 2004, the book had sold more than nine million copies and had never been out of print. Critics and readers alike enthusiastically received The Name of the Rose, and the 1986 Jean-Jacques Annaud film, starring Sean Connery and Christian Slater, only fueled interest in the novel.

If The Name of the Rose seems an odd choice for such critical and popular acclaim, Eco’s elevation into literary superstardom seems just as surprising. A scholarly university professor, Eco’s main fields of interest include semiotics, aesthetics, and medieval philosophy.

Umberto Eco was born on January 5, 1932, in Alessandria, Italy, to Guilo and Givovanna Eco. He attended the University of Turin, where he studied medieval philosophy and aesthetics. He published his doctoral thesis, Il Problema estetic in Tommaso d’Aquino (The Aesthetics of Thomas Aquinas) in 1956. In that same year, he began his academic career as a lecturer at the University of Turin. Eco’s familiarity with and attraction to popular culture was manifested early; he began writing a monthly column called “Diario minimo” in 1959, and has continued to comment actively on current affairs and culture since that time.
In 1984, Eco published an English translation of an essay on the composition of The Name of the Rose called “Postscript to The Name of the Rose.” This essay is included in the Harcourt 1994 edition of the novel.

Eco has won many awards for his fiction,

Eco followed the successful The Name of the Rose with several more novels, all translated into English by William Weaver. These include Foucault’s Pendulum (1989); The Island of the Day Before (1995); and Baudolino (2002).