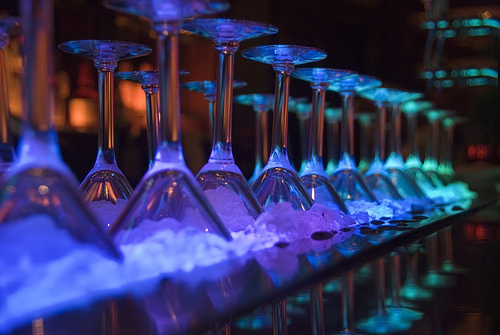 A sprite-like woman perched herself delicately on a stool at the bar, ever mindful of the black cocktail dress she wore. It was her favorite as it showcased most of her many tattoos that decorated her small form with its sweetheart neckline and asymmetrical hem. She paired the dress with a red heels that, though gave her a few more inches in height did not allow her to touch the floor while she sat, and a small clutch purse shaped like a coffin.

Said woman, known to most as Lilith, politely ordered a non-alcoholic drink as her manicured nails traced random patterns on the bar top. She felt a little out of place in such a grand hall among professionals such as these people.

Normally she wasn't one to be intimidated, you couldn't be soft if you have lived the way she had, but no one could really blame her for being on edge. It wasn't just because she was a new recruit, the bottom of the food chain, but also because she was sure most if not everyone in here could kill her in a heart beat if they so chose to.

That didn't mean she was going to let anyone know she was even a tiny bit uncomfortable though. There was nothing that ticked her off more than people viewing her as weak.

When she received her drink she took a small sip and spun in her seat to watch the others mingle with one another. She was amazed at how many good looking people seemed to work for this secret agency.

'Maybe it is a requirement?' She thought with a small chuckle as she continued to sip on her drink, her eyes scanning the crowd lazily.

The moment Kai stepped into the hall for the cocktail party was the moment that he finally realized that he was stepping into a circle of Hell. The magnitude of people in this single hall had him wanting to turn, but that usually only made people more eager to single him out and spill their thoughts. So, running a hand through his hair silently, he made a beeline for the bar. He couldn't work up much of a thirst, but just being there meant that he would have some sort of cover. Ordering himself a soda--because what else was he gonna order? Water?--he slid onto a stool and stared at the counter intently. The smooth surface reflected his face back to him, his eyes darting the metallic glint of the cross in his ear and the chains connecting it to the piercing in his nose.

There was another thought that entered his mind. He couldn't call himself Kai now. He was no longer "Kai Lim," but a number. One he had yet to learn. He wondered if it would be like this the whole time he was part of this agency.

Lilith had turned her watching into a sort of a game, trying to guess what each person's main skill was. 'That guy has to be some kind of technical expert. And her, she has to be a seductress.' She thought with a small quirk of her lips.

She turned back to the bar, holding her empty glass up. "Another please." She called out to the bartender with a small smile, the nails of her free hand gently tapping against the side of her face.

Her eye caught something glittering in her peripheral vision and she turned towards it fully as she waited for her drink. The thing that caught her eye? The piercing belonging to the gentleman not too far from where she sat. She halfheartedly looked him over. He looked fairly young, about her age, but he had this 'Don't mess with me aura' that was odd for someone their age. With it he was almost as intimidating as the rest of the agents.

She chewed on her lip for a moment, debating on whether or not she should talk to him. With a tilt of her head she called out to him despite her better judgement, "Are you an agent or a recruit?"