Unfortunately, though my book is ready for publishing in 2 weeks (It's technically ready a month ago, but I'm giving my beta readers time for the final approval), my cover artist decided to abandon the project. I was forced, on short notice, to assemble a book cover on my own. That being said, I would greatly appreciate your feedback. 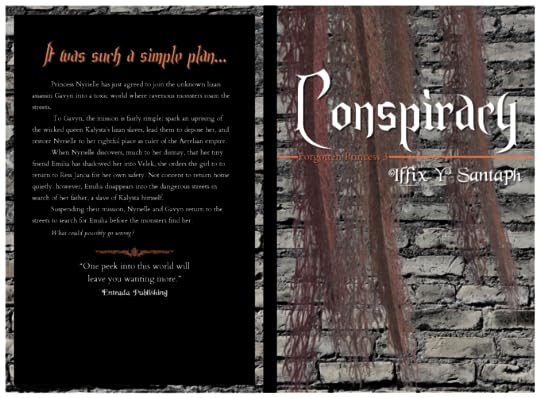 Thanks, in advance, for any comments you're willing to share. Even if those comments are "blech!" or "I'm gagging." I'll take them for what they're worth.

Mod
Moved to the Blurbs, Covers and Trailers Workshop folder.

The picture is simple. It's unclear to me what it is but it looks like roots growing on a pavement (or a wall)?
Anyway, it's different and I might pick the book up to see what it's about. However, the font used is hard on the eyes. The A looks too much like D (so it makes the C look like an E). Now, it's not to say that I can't read Conspiracy, because I still can. I'm just wondering if a better font would make the cover more attractive.

It's nice and looks very professional. At first I thought those might be dried/withered English ivy type vines, but then thought it must be hair (i.e., Rapunzel in the tower and that is her hair; if it is, it looks a bit dried, so not quite sure). The use of a straight wall all the way across, as opposed to a corner or half, does not particularly draw me into it, but it is a nicely done cover.

Well done for having a go at it yourself!

Have you looked at a thumbnail version? The font on the front may be difficult to read, particularly the smaller font. I have my glasses on and I can't read what the orange coloured text below the title says, even at the (larger than thumbnail) size you've inserted into the post.

Perhaps take another look at your font before releasing. While your font should reflect theme/genre, you want to make sure it's not too busy or hard to read. I suggest changing your font to something more legible. Based on your current lettering, I recommend looking into Gothic fonts.

For the cover, I recommend choosing another image. This is because the muted colors don't necessarily catch the eye. Same goes for the bottom portion of your cover -- too much empty space does not encourage eye movement.

I think it's a good first draft, but in need of a redo before publishing.

Thanks for the comments, guys. I will take a good look at the ideas and see what I can come up with. 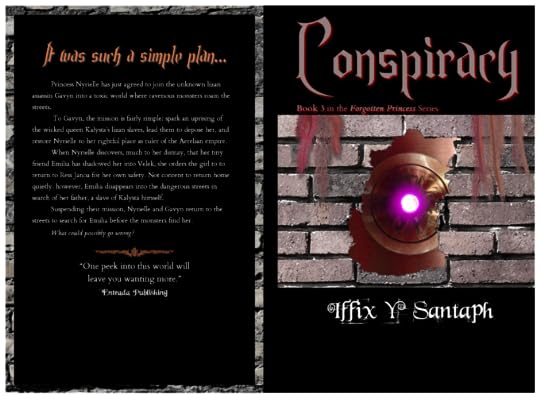 Regarding font comments: That font appeared on the cover of both of my other books. Whether that's a good thing or not is a subject for debate, but the font (which I still love, btw) has become a bit of a branding on this series.

Regarding the small text that's barely discernible on the front page, I have seen this very commonly when referring to a number of a book in a series. If you read series fiction, you might notice that the artist almost seems to hide this detail, partly because it isn't critically important. (WHAT!)

And that's even more so for this series as I introduce each new book with a letter about what was missed in the previous book. (That may cut down on my sales. But those who enjoy my work likely won't mind this consideration, and so far it has helped me get reviews for my later works, since I'm a new author as of April 2015 and MOST of my new readers didn't read my earlier work. At least not yet.)

However, that said, I CAN tweak the font. I can change colors to make it more visible. I can resize up or down. (I will need to print it out to tweak the size, though I imagine the back-page blurb especially will need to be a bigger font size.)

About this update: that moss still appears in the upper right, and I added more. It is moss. This story takes place in a post-apocalyptic world, where poison moss grows, and though the moss is deadly to the touch, breathing in the miasma of the world makes those who haven't been inoculated exceedingly loopy. (That plays a major plot point.)

I added the robot, though this was not a new idea. The artist I was using originally designed the robot that should have been there. (It likewise plays a very significant role in the story arc.)

Again, feedback is very welcome. I hope this might help to explain. If you liked the other cover better, we'll continue to work on that one, though this cover seems to fit my vision better, and in fact ties better to the series, where both book covers had an emphasis on a character's eye(s).

I like the second one better. One thing I would change is to make the "Forgotten Princess" line a little bit bigger.

Hmm, if the intention is for it to be a robot looking through a hole in a wall, I'd suggest making the hole follow the seamwork of the bricks. At first glance, it just looks like some sort of metal thing with an LED light sitting on top of a brick wall. But maybe that's just my eyes not doing their job correctly.