I've been writing the first draft of The Soter Herd for almost a month now, and I'm already on the last chapter! EEEE!

The sun was shining brightly one spring morning in the southern region of Great Plains, and the air was filled with the cheerful chirping of birds. The large herd of horses grazed the lush green grass peacefully, as if there wasn’t a care in the world. All except Stone, who was pacing back and forth near the herd, snorting restlessly.
“What’s taking so long?” the grullo stallion nickered as he finally stopped his pacing.
His dun younger brother, Sunspot, looked up at him, swallowing the last mouthful of grass. “The Cloud Horse will be here, just as Soter promised. We just have to wait.”
“We’ve been waiting for a week!” Stone snapped, stamping his hoof. “I’m sick and tired of waiting!”
Hearing the outburst, Lightning, Thunder, Cobalt, and Apache lifted their heads and stared at Stone. Then several mares did the same, wondering what the commotion was about.
Stone noticed their puzzled looks, and he ducked his head, lowering his ears in embarrassment. “Sorry,” he muttered.
Lightning, a light gray and adoptive son of the herd’s leader, smiled and shook his head. “No worries, Stone. You were just on edge.” He glanced back at the others. “We all are in a sort of way.”
Nearly a week and a half went by since their mentor, Soter— half-Son of Sierra and Shadow and true Son of The Great Horse— came back to life three days after His execution in the Lair of the Wolves, fulfilling the entire ancient Prophecy of the Light Horse. After His resurrection, the Light Horse now reigned as King of Equus in His heavenly home, the Great Paradise.
“It almost feels as if it was yesterday when Soter appeared to us,” Lightning finally said after a moment of thinking.
Apache, the brown-and-white pinto, snorted humorlessly. “And to think that I doubted that He could come back to life…”
Lightning’s steel gray twin brother, Thunder, gave Apache a friendly nudge on the shoulder. “Soter still forgave you, Apache. Remember? Just as He forgave Stone for denying the fact that he knew Him.”
Stone nodded, smiling in remembrance.
Presently, Cobalt asked, “Why us?”
The others turned to the usually quiet black horse.
“What do you mean?” Stone nickered.
“I mean…” Cobalt softly answered, “Have any of you wondered why— of all stallions—Soter would pick the six of us as his apprentices?”
“There were seven of us,” Thunder corrected.
The six quieted with grim faces as they thought about Dusk, Soter’s foalhood friend from Shadow’s herd who came to join the small band of apprentices. He had hoped that Soter would unleash His powers to destroy all “evil” equines, including the Thoroughbreds that dominated Great Plains.
But little did he realize that wasn’t Soter’s way to use force to rule. Disillusioned, Dusk eventually betrayed Soter by turning Him in to King Wildfire in exchange for his own herd and land. No one had seen or heard from again since the day of Soter’s arrest.
Stone shook his mane and pawed the ground with his hoof angrily. “When I see that traitor, I’ll pommel him for his—”
“You know what Soter will say about violence, Stone,” Sunspot interrupted.
Chastised, Stone lowered his muzzle, grimacing.
“We need to forgive Dusk,” Lightning added. “Soter… told us to do so. Hating Dusk won’t change anything. Besides, if Dusk hadn’t betrayed Him, Soter wouldn’t have fulfilled the Prophecy with His death in the first place.”
The stallions took those words to heart with solemn nods. They began to understand that, somehow, the Divine Ones had orchestrated the entire plan of Soter’s sacrifice. Even Soter knew that Dusk would eventually betray Him from the very beginning, yet he still accepted him as his apprentice.
Apache decided to change the subject when he asked, “How will we know when the Cloud Horse will come?”
Stone grinned at his pinto friend. “Doubting again, Apache?”
“No!” Apache retorted with an irritated stamp of a hoof. “It was just a question! Why do you always think I always doubt?!”
Stone laughed and nudged the stallion’s shoulder with his head. “Relax! I was just teasing!” 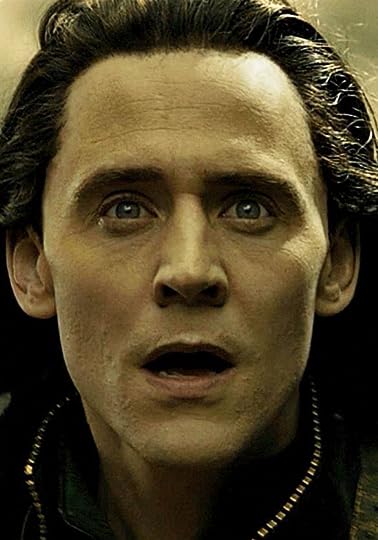 Really? I didn't think it was THAT intense for the first chapter!

It gets even tense later in the book!

(I'll bet that's what Loki looks like after Hulk gave him a good thrashing! Loved that part!)

Time to take a break, and then, editing!

It took me almost a month and a half to finish it, since I was busy with school and work!

Awesome job!!!!!!! You did great!!!
And you're way ahead of me (that goes without saying), you've already published a few & are almost done with this one! Awesome!!!!