This week’s last Sketch is called “A Visit to Newgate” and it was especially written for the first collection of the Sketches in volume form, dating February 1836. Newgate used to be London’s main prison at the time, and many Pickwickians will probably remember it – more or less kindly – from Barnaby Rudge.

Like in the preceding Sketch, we can distinctly sense Dickens’s skepticism of the death penalty when he paints a stark contrast between people in the outside world, who carelessly go about their daily business, and the convicts within the grim prison walls those people pass unthinkingly, convicts who are waiting for the executions to take place and who are, in a way, the living dead. We even learn, in a later passage from that Sketch, that it was not unusual for 14-year old boys to be sentenced to death on a charge of burglary. The whole Sketch can be seen in the light of indicting the cruelty not only of the death penalty but on the ways it was inflicted. It is seemingly based on a visit of Dickens’s in the company of an American journalist and of his publisher dating 5 November 1835. This slightly reminded me of David Copperfield, where the eponymous hero also visits a penitentiary only to find his two former enemies Littimer and Uriah Heep as model prisoners. The most impressive passage for me was the vignette he gave of a prisoner in his death cell waiting for his execution to take place and counting the hours that he had still to live upon earth. The prisoner’s memory takes him back to his wife, whom he asks for forgiveness in his thoughts, and he also fantasizes about miraculously escaping from his cell, while all the while one hour after another passes. Maybe, Ambrose Bierce had read that Sketch and was inspired by it so that he came up with An Occurrence at Owl Creek Bridge? This marvellous passage was probably also in Dickens’s mind when he later wrote the ending of Oliver Twist, where Fagin was awaiting his execution.

There is a description of three other criminals on death’s row, one of whom still has reason to hope for a pardon. There is this little detail about him which makes me think of Mr. George:

”The first man was pacing up and down the court with a firm military step—he had been a soldier in the foot-guards—and a cloth cap jauntily thrown on one side of his head. He bowed respectfully to our conductor, and the salute was returned.”

We also learn about the women in the prison, about people who are detained for debts, and one of the things I found quite interesting was that the children who were held prisoner – for picking pockets and other thefts – were actually going to school in prison.

Great illustrations you're posting Kim! Here's one of the cover of the first edition: 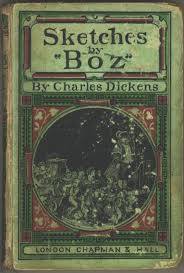 "Christmas time! That man must be a misanthrope indeed, in whose breast something like a jovial feeling is not roused — in whose mind some pleasant associations are not awakened — by the recurrence of Christmas."

Dickens's fascination with prisons and prisoners was a life-long curiosity and interest. When he came to North America he asked to be shown jails in many of the places he visited. In American Notes For General Circulation there is a section describing his visit to the Kingston jail which was the biggest, gloomiest prison in Upper Canada (now called the Province of Ontario.)

While in Canada, he also visited Niagara Falls and the town of York which later became called Toronto. His recounting of these places is an interesting read for all, and especially Canadians. Dickens on our soil!

Believe it or not, the Kingston "Pen" was closed just recently. A truly mediaeval structure.

Peter wrote: "Dickens's fascination with prisons and prisoners was a life-long curiosity and interest. When he came to North America he asked to be shown jails in many of the places he visited."

Thinking of his visit to North America, without going and looking in the book, I believe he was at one time in York, Pennsylvania, then traveled from York to Harrisburg, that's our closest city, about 45 minutes from us, come to think of it, it takes about an hour now since traffic seems to be getting worse; anyway, he then travelled up the Susquehanna river to I can't remember where. If he came up that river he went right past Millersburg, PA and that is about 15 minutes from me. I can't remember what he thought of the area though.

Oh, Peter, I just thought of something. Last night my husband asked me how long our 22 pound turkey will have to be in the oven tomorrow trying to figure out what time we are going to have to get up, get the filling ready, stuff the turkey, and put it in the oven. I told him how long based on my long used turkey roasting method that I got from my mother, but now having the internet I decided to check. I was exactly right, but I then realized the site I was on was from Canada, the "Turkey Farmers of Canada". Now this turkey place gave me the option of typing in the amount of people that will be here and gave me the weight of the turkey I will need. After typing in my 7 adults and 2 children (there are 3 more coming but after the meal for dessert), they told me I would need a 12 pound turkey. 12 pounds for 9 of my family members? We'd run out about half way through, either we eat a lot or Canadians eat a little. :-)

Kim wrote: "Peter wrote: "Dickens's fascination with prisons and prisoners was a life-long curiosity and interest. When he came to North America he asked to be shown jails in many of the places he visited."

I wonder if the Canadian site was quoting the weight of the turkey in kilograms rather than pounds? Canada is using the metric system. One kilogram is roughly 2.2 pounds.

I wish my fellow Pickwickians in The United States a Happy Thanksgiving. In pounds, kilograms, gallons or litres have a wonderful day with your families.

How horrid is the "condemned pew." The thought of a person, soon to be put to death, having to sit beside their coffin.

Dickens's description of the prison fascinates me. While the horrors of the place are piled one upon the other there is a rather detached feel. Dickens writes as if he is a camera, observing, even commenting and criticizing, yet, to me at least, still keeping the sketch as objective as it could be.

Dickens in Canada, Dickens in the United States ... I wonder if Dickens ever travelled through Germany, or just resided in Switzerland.

Maybe Dickens was so fascinated with prisons because of his childhood trauma. If you come to think about it, the beginning of the Sketch is already very telling: The outside world is going about their business and does not really care about what might be going on in those prisons, whereas the prisoners are separated from that, physically, so close word as though they were living on another planet. Probably it was like that for young Dickens: When his father was imprisoned for debt, his whole world changed dramatically, and still most people he knew went about their own lives as though they were completely unaffected by what happened to the family - as they probably also were.

The Sketch also shows how cruel the penal system was in those days, and the "condemned pew" with the coffin is definitely one of the most striking examples. I would also say that the way the narrator describes the prison chapel is meant to indicate that religion has become corrupted here and lost its true meaning. This becomes clearest in the following detail for me:

"the tottering little table at the altar, with the commandments on the wall above it, scarcely legible through lack of paint, and dust and damp"

God's word has become obliterated in this prison chapel, as it seems, and the whole place is just a sham.