Scenes 23, published in the Evening Chronicle on 30 June 1835, takes us even further into the realms of poverty and low-life when it opens „The Pawnbroker’s Shop“ door for us. Dickens makes it clear that he is not going to show us one of the more “superior” pawnshops but that he is going to take us to a haunt in Drury-Lane instead. There is an intriguing example of natural fallacy when he describes the door of the shop:

”It is a low, dirty-looking, dusty shop, the door of which stands always doubtfully, a little way open: half inviting, half repelling the hesitating visitor, who, if he be as yet uninitiated, examines one of the old garnet brooches in the window for a minute or two with affected eagerness, as if he contemplated making a purchase; and then looking cautiously round to ascertain that no one watches him, hastily slinks in: the door closing of itself after him, to just its former width.”

Apparently, and obviously, most customers are reluctant of being seen enter one of these shops, and therefore there are little boxes along the counter into which the more diffident and nice customers can go in order to avoid being seen when they pledge some of their household goods, trinkets etc., while there is another room for those who have stopped caring about being seen. I felt quite reminded of Martin Chuzzlewit because Martin went into one of these boxes to do his shameful business in privacy, when, to his dismay, he was surprised by Tiggs. The Sketch gives us the gamut of the different customers: old women who are regulars in that place and try to propitiate the rather lofty pawnbroker’s clerks, uncouth and drunken men (probably the same who come from and will later return to the gin shop), but also a woman who is not yet used to pledging her belongings and who even inspires the clerk with some awe.

One part of the description gave me a really bad feeling:

”This eloquent address produces anything but the effect desired; the women rail in concert; the man hits about him in all directions, and is in the act of establishing an indisputable claim to gratuitous lodgings for the night, when the entrance of his wife, a wretched, worn-out woman, apparently in the last stage of consumption, whose face bears evident marks of recent ill-usage, and whose strength seems hardly equal to the burden—light enough, God knows!—of the thin, sickly child she carries in her arms, turns his cowardly rage in a safer direction. ‘Come home, dear,’ cries the miserable creature, in an imploring tone; ‘DO come home, there’s a good fellow, and go to bed.’—‘Go home yourself,’ rejoins the furious ruffian. ‘Do come home quietly,’ repeats the wife, bursting into tears. ‘Go home yourself,’ retorts the husband again, enforcing his argument by a blow which sends the poor creature flying out of the shop. Her ‘natural protector’ follows her up the court, alternately venting his rage in accelerating her progress, and in knocking the little scanty blue bonnet of the unfortunate child over its still more scanty and faded-looking face.”

Oh, how I would have liked to come down on that brute like a ton of bricks and thrashed the life out of him! Just think that although it is fiction, it is based on what used to be reality in those days, and of how many women and children were abused by drunken men. Maybe this family was a forerunner of the brickmaker and his family from Bleak House.

What also struck me about that Sketch was that Dickens here obviously referred to a prostitute, which was probably not in tune with Victorian sentiments and mores:

”In the next box, is a young female, whose attire, miserably poor, but extremely gaudy, wretchedly cold, but extravagantly fine, too plainly bespeaks her station. The rich satin gown with its faded trimmings, the worn-out thin shoes, and pink silk stockings, the summer bonnet in winter, and the sunken face, where a daub of rouge only serves as an index to the ravages of squandered health never to be regained, and lost happiness never to be restored, and where the practised smile is a wretched mockery of the misery of the heart, cannot be mistaken. There is something in the glimpse she has just caught of her young neighbour, and in the sight of the little trinkets she has offered in pawn, that seems to have awakened in this woman’s mind some slumbering recollection, and to have changed, for an instant, her whole demeanour. Her first hasty impulse was to bend forward as if to scan more minutely the appearance of her half-concealed companions; her next, on seeing them involuntarily shrink from her, to retreat to the back of the box, cover her face with her hands, and burst into tears.”

Even though the bursting into tears might have been a typically Victorian concession to sentimentality, this is a very strong scene.

Here is Cruikshank's illustration for this sketch: 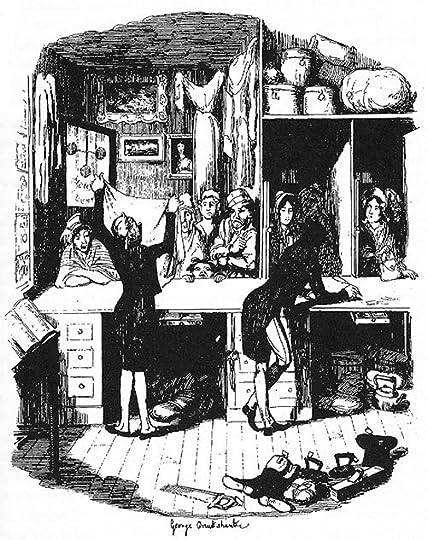 I found this sketch to be truly depressing. There is such a casual brutality to the events. The wife beating, the prostitute, the entire tone is dreary. No doubt that's what Dickens wanted to convey; he was very successful.

If the graveyard was the last stop on these peoples' lives, then surely pawnshops such as these were the waiting rooms.

This is Fred Barnard's illustration of the sketch: 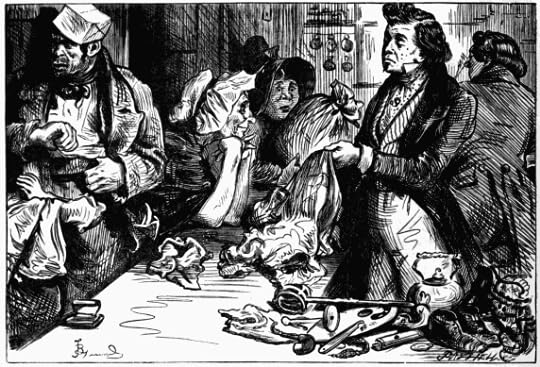 See the paper hat on the man on the left's head? Did we not learn during our reading of Barnaby Rudge that hats for craftsmen were often made of paper? I think that Simon Tappertit wore a paper hat. It's nice to spot that little detail here.

I also think that the final Sketches are getting more and more depressing. As a father, I can hardly bear to read of violence done to children, and that scene really gave me a bad feeling.

I find it interesting (and perhaps disturbing) when I consider how young Dickens would have been when he wrote these sketches. Yes, he was aware of the ills of society with his extensive walking and early occupations with a law firm and as a parliamentary reporter, but still, he is already viewing the world through dark glasses. And yet, then along comes PP.

Whereas young people nowadays can walk through life with blinkers hiding grim realities until well into their 20s or 30s, i.e. until they have to find themselves a job, in Victorian times, misery was probably more directly on public display. Apart from that, Dickens's own early life was tainted by misery and deprivation, and so it is little wonder that even in his early writings, his tone could suddenly darken. What I like, though, about Dickens is that he is capable of blending the grim sides of life and the comic, without milk-and-watering his social message. Conrad is dark, through and through, with an occasional touch of very bitter and wry humour, but Dickens is different ;-)