as I sauntered through the chartered streets of my hometown Friday afternoon, I noticed that people were already building up the booths for the Christmas Market and decorating Christmas trees, and I said to myself, “What a baubleful world!” Be that as it may, our Christmas read is not too far off, either. Meanwhile I have the impression that the Sketches Dickens published under the heading of “Scenes” are getting more and more depressing and ready to concentrate on the darker sides of London life, and I hope that the “Characters” section will be somewhat merrier again. Reading this week’s five Scenes, however, I often felt reminded of motifs from Dickens’s novels.

Let us start with Scenes 21, which is called “Brokers’ and Marine-store Shops” and which was first published in the Morning Chronicle on 15 December 1834. My first problem after reading some pages into the Sketch was that I doid not really know what a “broker” in that context was. I know about financial brokers, like the one Jerry Seinfeld was worrying about, but here it seems to refer to somebody who sells second hand furniture and other stuff. So I was asking myself if a broker was just a second-hand dealer, like Grandfather Trent in The Old Curiosity Shop but a look into my dictionary just gave me the definitions of “broker” I already knew. Then I remembered that I have a copy of What Jane Austen Ate and Charles Dickens Knew shelved, and to my delight, I found the following definition in the glossary:

”broker - Sometimes used to mean a stockbroker or a pawnbroker. The term was also applied to a secondhand furniture dealer licensed to appraise household goods or sell them when someone fell behind on the rent. In one of his frequent epistolary communications of disaster, Micawber writes to David Copperfield that he is being watched over by a drunk ‘employed by a broker. That individual is in legal possession of these premises, under a distress for rent.’ Less often, perhaps, the term ‘broker’ might have been used to refer to the bill brokers who bought and sold bills of exchange.”

Thus encouraged, I looked up the term “marine-store shop” in the same invaluable book, and this is what I found:

”marine store shop - Not unlike a rag-and-bone shop except it tended to trade more in marine goods, often having customers, e.g. sailors, in waterfront areas.”

We are clearly on the shadier and shabbier side of London life now, and the Sketch basically gives a description of the goods on sale in shops like the ones mentioned above – with a little excursion on sofa bedsteads as opposed to turn-up bedsteads – and on the various locations of these shops. Sometimes, these descriptions are very funny, as in
”an unframed portrait of some lady who flourished about the beginning of the thirteenth century, by an artist who never flourished at all”.

Maybe this one not only struck me because of its nice play on words but also because our recent reading of BH has made me very sensitive on the topic of portraits of ladies. I also noticed that the Sketch ended with a reference to the King’s Bench prison, which was near those marine store shops and which was the place where Mr. Micawber was detained for certain financial obligations of his.

as I sauntered through the chartered streets of my hometown Friday afternoon, I noticed that people were already building up the booths for the Christmas Market and decorating C..."

already??, when did you expect them to build them? If they wait until December, which seems to be the time most of the people who seek me out just to complain about how early people like me decorate for Christmas seem to think we should start, they wouldn't get done until the day is here. Better "early" than late. However, I just can't seem to come up with a day that would be too early to build a booth for a Christmas market. Don't forget to get me one of those German Schwibbogens - I had to look for that word for awhile - those things are amazing and are not in Pennsylvania. :-) 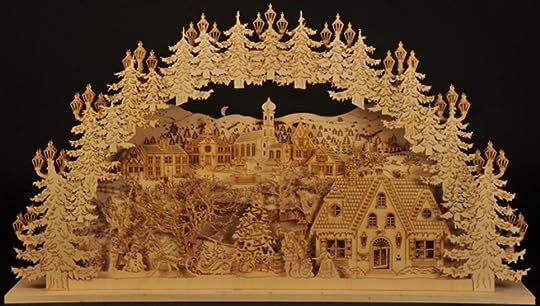 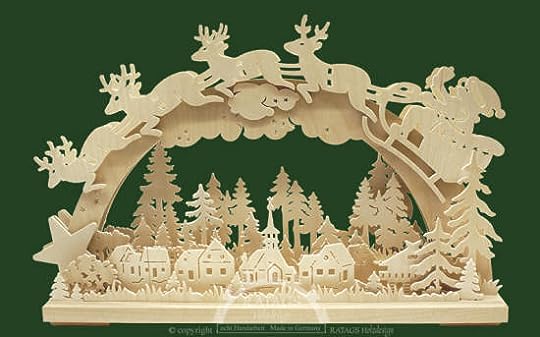 as I sauntered through the chartered streets of my hometown Friday afternoon, I noticed that people were already building up the booths for the Christmas Market and decorating C..."

Would this shop be akin to The Midshipman in D&S?

You mention in your post "portraits of ladies." Please, never suggest we read a Henry James novel.

yesterday the Protestant Church calendar had that Sunday in commemoration of the dead, one of the gloomiest holidays in the whole year - and one I smugly ignore because it is so gloomy and always falls on a Sunday, anyway. Nevertheless, it is generally considered bad style to open Christmas markets before that Sunday.

Okay, the Christmas market was not opened on Friday but today, and I was among the crowd as my workplace is not far off. Our mayor gave a rambling speech on the spirit of Christmas and on the necessity not to allow terrorists to intimidate us from going to the Christmas market and from celebrating Christmas. It was, all in all, quite strange today, but there were a lot of people.

My dentist told me today that she will not decorate for Christmas at home because afterwards she will have to put everything away again. Does that not sound like a sensible woman to you? ;-)

Peter wrote: "Would this shop be akin to The Midshipman in D&S?

You mention in your post "portraits of ladies." Please, never suggest we read a Henry James novel. "

At first, I also thought about the Midshipman, but I think that there is a difference: Solomon Gills was a maker of nautical instruments, and his shop was probably dedicated to selling them. The marinestore shops, as far as I understand the concept, bought and sold all sorts of seamen's stuff, not just instruments. Probably some kind of pawnbroker's for mariners?

And no, I will definitely never suggest reading a Henry James novel because I heartily dislike Henry James. ;-)

yesterday the Protestant Church calendar had that Sunday in commemoration of the dead, one of the gloomiest holidays in the whole year - and one I smugly ignore because it is so gloomy and al..."

When I read what you said I was baffled at yesterday being one of the gloomiest holidays for us Protestants, I never heard of it. So I, of course, looked it up.

"Sunday of the Dead in Germany

The Sunday of the Dead (Totensonntag) is a religious holiday in the German Evangelical Church dedicated to the memory of those who have passed away. Like the National Day of Mourning, it is a “silent day” - this means that in some regions of Germany music or dance events are prohibited.

Many Germans visit the graves of loves ones who have passed away. Services are held in many Lutheran churches.

The Totensonntag is a so-called “silent day” (stiller Tag). In some German states music or dance events are prohibited by law. Like on any other Sunday, offices, banks and schools are closed. Public transport usually runs on a normal Sunday schedule.

The Sunday of the Dead was initiated in 1816 by Frederick William III of Prussia."

Oh, here are your silent days for the next few years.

Tristram wrote: "And no, I will definitely never suggest reading a Henry James novel because I heartily dislike Henry James. ;-)"

Count me out on that one too.

Kim wrote: "Tristram wrote: "And no, I will definitely never suggest reading a Henry James novel because I heartily dislike Henry James. ;-)"

Count me out on that one too."

Can three people err on the same point? ;-)

No way! She is brilliant, and a very good dentist. I remember my second dentist very well, the one I went to when I was a teenager. He was a most savage man, with a ghastly sense of humour, which I enjoyed. One day, sitting in the waiting room, I heard a child cry as though he were being roasted on a spit, and then I heard the dentist laugh and say something like, "I haven't even started yet!" I remember the looks we exchanged with each other in the waiting room.

That dentist had the bad habit of asking his patients all sorts of questions during treatment, and as my mouth was usually open I couldn't answer very well. My present doctor talks about all sorts of things but never asks any questions when she is merrily drilling away on my teeth.

No way! She is brilliant, and a very good dentist. I remember my second dentist very well, the one I went to when I was a teenager. He was a mo..."

She's not decorating for Christmas, you need a new dentist, that's all there is to it. :-) I hate going to the dentist no matter which one I get, it's a husband and wife, and they are both very nice people. They put a 12 foot Christmas tree in their entryway every year. :-)

What Jane Austen Ate and Charles Dickens Knew: From Fox Hunting to Whist—the Facts of Daily Life in 19th-Century England (other topics)