Heh sorry for the long wait


1. A girl who the student body president all four yers of high school her senior year she reconnects with a childhood friend and he happens to be a football star. His team dared him to ask her out, so they started dating and everything and he actually really falls in love with her. However his father found someone for him to marry because his father doesn't like her at all in fact she comes from a really bad background. However she ends up getting pregnant by him but she also heads up having cancer and it's either do the treatment and kill the baby or don't do the treatment and have the baby. She wants to have the baby because he basically broke up with her because his father was breaking them apart. However when his friend tells him your girlfriend has cancer and is pregnant you need to talk to her. So he trys to talk her out of having the baby so she could live. However she doesn't want to live if it means not having him.

2. Girl A and Guy A have been dating since Middle School, both are Seniors in High School now. Girl A's family is very loving and caring, though has it's flaws. Guy A's family isn't the best to have, but he never complains about it. The people that he lives with are loving and all, plus he has Girl A there for him. But Guy A has a disease. (AIDS, diabetes, cancer, whatever wanted) And with so many children to care for at home, it's hard sometimes, and his time may soon be running out. After his passing, Girl A feels like she can't ever find another person, and she stays away from most people now. A few years pass, and she meets Guy B who is a single father. They grow closer, but Girl A is still very, very cautious of ever letting another an back into her life, not wanting to experience anymore heartbreak

3. Two girls are best friends they always have been. One day they go to a little festival having their futures be told for free. One has really good luck (Girl A) the other not so much(Girl B). One day the girl B goes to school and girl A isn't there, then her car breaks down and when she gets out she's attacked by guy A however guy B saves her, he then realizes she's the long lost daughter of a king and Queen. However life isn't all it seems is it?

We must have posted at the same time lol. I just posted it.

Okay so characters then we're good?

Okay do brother and sister one here and the school president and football player on the other?

Okay. So I'm working on being a little bit more detailed is that fine with you. 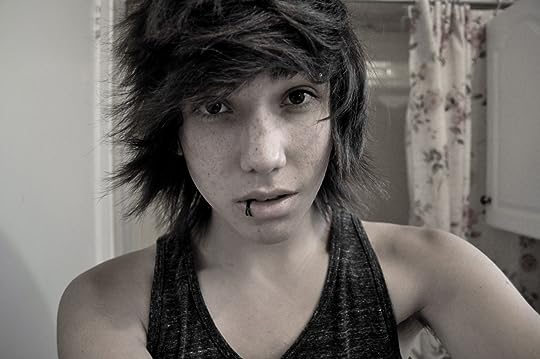 Okay then! did you want to start I'm actually really bad at starting.

Hayden had driven back to the house, he stayed out in the little pool house and paid rent to his father. He was happy that his father had finally found someone and had gotten married, he was happy if his father was happy. He liked that he had a mother now and a little sister to bug, his mother had died when he was about ten so it had been rough ever since then. He liked Riley she seemed like a fun nice girl, when he got back to the house he walked in and took off his shoes, it was up to the two of them to house sit while the newly weds were off on their honey moon for awhile.

Hayden had looked up at Riley and gave a small grin to her. He thought she looked really pretty in that dress but thought maybe he shouldn't say anything about how she looked. He gave a slight nod. "Yeah it was a pretty nice one. The dress looks pretty on you. I don't know if anyone's told you that today." He said to her just being nice of course, he then mentally strangled himself because of what he said, he told himself he wouldn't.

"Well I didn't know I dressed girlish today but thank you." He of course caught on to her teasing and decided to play along and he blinked to have his eye lashes look a little girlish too. He then stopped and laughed a little bit and looked at her. "Alright so I guess we are on our own for a little while, so I hope you can put up with me." He said as he looked at her, he then turned around and grabbed some juice out of the fridge, he then grabbed a class down. "Did you want some?"

"Oh you mean I don't have to act like a little kid around you? do we even have any champagne or did the newly weds drink it all." He opened the fridge again to put the juice back but he could not find it at all. Maybe his sister had some kind of idea of where it would be but he wasn't really sure. He took a step back to see if he could find it. Was he just blind or something?

"Huh your mom and my dad are totally different, my father usually leaves it in the fridge when I got to be fourteen he just didn't care anymore. He said if you are going to drink you're going to drink, lets just say I didn't drink that much because that little speech put enough guilt on me." Hayden held the chair so she wouldn't fall, he loved how he seemed that he could have fun with her. Maybe she could become his friend and vise versa.

Hayden grabbed the two champagne glasses. He then just gave her a smirk. "Shorty" he placed the two glasses on the counter and closed the cupboard. He jumped up on the counter and sat down, he just watched her every move. He sighed a little bit. "So can I know more about my new little sister or is that a no? You can tell me anything as well it doesn't matter to me what you tell me I just want to get to know you more I think they sprung this marriage thing on us."