Do you have any ideas? Or what genre do you like to do?

Hmmm... I think I can work with that but I don't have any specific ideas at the moment. Do you? (Sorry, I can try to come up with some but I'll need a few minutes)

Any of those sound good to me! :) The ghost one or werewolf one sounds cool!

Aww that's not good :( What type of ghost story did you have in mind?

Hmmm... I just randomly thought that it would be interesting if it was like a detective and his/her ghostly companion solving crimes but then again that would be kind of hard to execute. I don't know >_< What do you think?

I could be the ghost if you want. I'm not exactly sure how it would work, but it might be fun! *shrugs*

Hmmm I was thinking it might be interesting to have a guy and a girl if that works for you. I don't care which gender my character is

I can be a male ghost...? I don't really have much of a preference, though :P

Hmm... I mean I think it will be a nice contrast to have a female and a male (and maybe their relationship can somehow grow to be more, if we want it to). I was thinking the guy could be the ghost and be kind of a pain and super pessimistic and annoyed by everything because he's dead... But the guy could be the detective and the girl could be the ghost too. I'm not really sure. All I know is I think one male and one female would have the best outcome

Okay awesome!! So should we create characters now?? :)

I am fine with whatever template usually. Would you prefer just name, age, appearance, and personality? (I might go in more depth because my character is dead/a ghost, but it doesn't matter to me either way)

Okay great!!! I'll start making my character right now! Oh and was there a specific time period we were going to take place in, or just the present?

Personality: mean but can be caring with the people
she loves, witty, doesn't trust easily, hates meeting new people 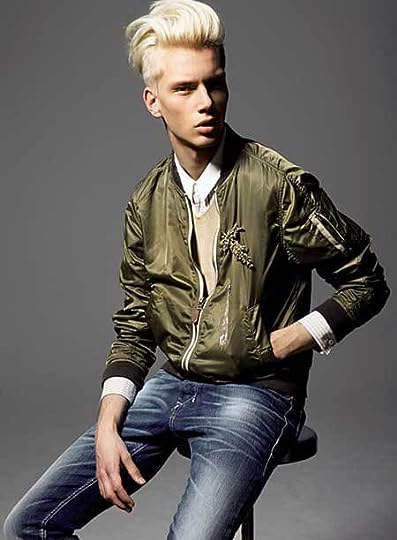 Personality: Thomas is a bit of a rebel. He has a rather pessimistic outlook on the world, and it may have to do with the fact that... Well, he's a ghost. He is extremely sarcastic, but can be serious when he absolutely has to be. He is extremely overprotective of those he cares about most.
Death: Thomas died six years ago when he was in a fight with his older sister's (ex)boyfriend. Her boyfriend was abusive, and he hated seeing his sister suffering, so he tried to put a stop to it, and paid the ultimate price.

Looks great!!! You want to start? Or should I?

Do you mind starting?

reply | flag *
message 38: by [deleted user] (new)
Aug 23, 2015 07:45PM
Amitra knows this is the worst part of the job. She hates seeing the girls lifeless body on the floor. Her mangled body makes it hard to tell it's a girl but Amitra knows it is.

Thomas bites his lip as he analyzes the body, looking for some sort of indication of how she was killed. The killer did a good job destroying the body, that was for sure. He glanced toward Amitra, not sure what to say. And he almost always had something to say.

reply | flag *
message 40: by [deleted user] (new)
Aug 23, 2015 07:50PM
Amitra tries to look away from the body but she can't help but think about what the girls life would be like if she hadn't of died. She knows Thomas would tell her to stop being such a baby about things. He was dead wasn't he?

((I just updated his age so he's closer in age to Amitra, if he hadn't died))

Thomas moved closer to Amitra, hoping to find a way to console her. Even though he could be overly snarky and rude at times, he did care about Amitra, at least deep down. "I've never understood why you pursued a career as a detective when you can't even handle looking at dead bodies. I, on the other hand, are perfect for the job because although they are still gruesome, I'm at least already dead so I can handle it."

reply | flag *
message 42: by [deleted user] (new)
Aug 24, 2015 02:27PM
"It's not just about that" she said. "She was only 15, she should have more time left. It isn't fair." As she said it, she knew she shouldn't have. Thomas died when he was 17. "I'm sorry Thomas that wasn't what I meant" she said quickly. "What I meant was she wouldn't be able to come back as a super awesome detective side kick like you did." She added. Amitra put her head in her hands a waited for Thomas to reply.

Thomas made an undecipherable noise, turning away for a few moments to compose himself. Her comment did hurt, but he did not want to admit it. He was better than that. "Just because I died young does not mean that I will not feel sorry for those who die young too." He grit his teeth angrily, more angry at himself than at anyone else. Okay, maybe he was angrier at the murderer. But that was beside the point. "She did deserve to live longer. But there's nothing we can do for her now, except seek justice. And find whoever did this to her."

reply | flag *
message 48: by [deleted user] (new)
Aug 25, 2015 06:30AM
Amitra knew Thomas was right, she could pull herself together again. She had to, for this girls family. She pulled her head from her hands and sighed, what's done was done and all she could do now was go forward. She instead concentrated on signs of what the murder left behind. "You're right, I'm sorry Thomas." She said quietly. Amitra suddenly heard people talking about the girl and said "do you have anything about her?"

He shrugged and leaned closer to the girl on the floor before them, walking around her trying to see her from different angles. He looked closer and frowned, seeing a tinge of red out of the corner of his eye and moving her hair out of the way. He was a ghost, but he could touch things. His touch just wouldn't leave a trace. So he was extremely useful at crime scenes. "Here. It appears that she was struck on the head. Probably fell over upon impact, and the killer mutilated her body to either 1) make sure she was truly dead, or 2) confuse us."

reply | flag *
message 50: by [deleted user] (new)
Aug 25, 2015 09:39PM
This didn't settle well with Amitra, there have been a string if murders by one man. She had a feeling he was the same person who killed this girl. If that was the case, then it was probably the latter. "Haven't there been more murders like this? Teenage girls I mean. I think it's the same guy doing this. And in this case, with the body, I think he was trying to throw us off his track. None of the other girls were mutilated like this. So why her?" Amitra said, thinking out loud more than anything. She had to get some of her thoughts out otherwise she would explode for the horror and shock of these deaths.