Here is where you post your tribute's interview and chariot ride:

For the Chariot Rides:
Please include your tribute’s costume (Please include a picture), reaction to their costume, reaction and interaction with the crowd, and if you like you can add their final thoughts before returning to their rooms. This will help your tribute to obtain Sponsor points, so it is advised to do this but it is not mandatory.

(view spoiler)[You can PM your chariot ride(s) to me if you don’t want to post it on here. (hide spoiler)]

For the Interviews:
You should include both your tribute’s costume and hair(Pictures should be included), and your tribute's and Caesar’s dialogue. This will also help your tribute to gain Sponsor points, so it is also advised to do this too.

(view spoiler)[You can also PM me your interview if you like. (hide spoiler)] 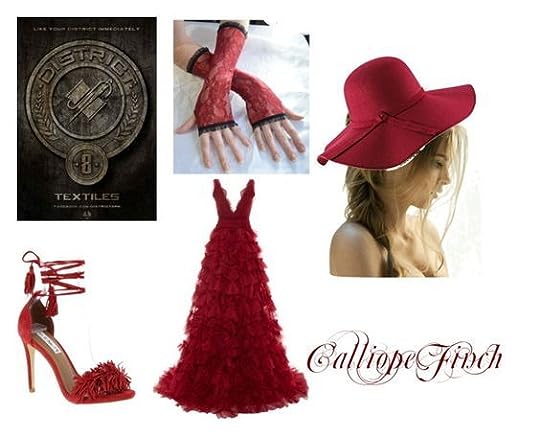 (hide spoiler)]
No.... nononononono! Callie wrung her hands as the time before their chariot left wound down. Not only was she going to be paraded before millions of people all over the country, she was wearing one of the most eye catching colors known to man! Sure, it was a darker shade of red, but it was still meant to draw attention to her. And to top it off, her stylist was forcing her to wear contacts instead of her glasses. She knew it was for the benefit of gaining sponsors, but surely there had to be some other way.
Her heart was racing, as she looked down at the heels placed on her feet. At least she wouldn't have to walk in them, but her balance was already shaky, and the horses weren't pulling, yet. There were only a few chariots left in front of her. She closed her eyes and pulled the floppy hat down as far as it would go to cover her face. Why in the world had she been chosen of all people?!
Before she knew it, the chariot lurched, and her eyes widened with surprise as her balance nearly gave out. Reaching for the nearest thing to hold on to, her arms wrapped tightly around her district partner's arm.
She had to admit that her dress was, indeed, beautiful (aside from how low-cut it was on her chest). The ruffles were floating on the breeze as the chariot was pulled, and it was a brilliant example of how her district didn't only specialize in materials of different colors. Most tributes she'd seen from her district were made up in patchwork clothing of some kind or another.
The thought brought a small smile to her face and actually eased her mind for a couple of seconds. While she thought about the clothing she was in, she distracted herself from the numerous eyes, trained on her, watching her every move, her face, her body language, her hold on her partner-
She blushed violently and quickly let go of him, opting to take the railing of the chariot instead so she didn't intrude on him if he didn't like it. She glanced to the side and watched as they passed flowers people had thrown into the road. If she had to be honest with herself, the games didn't seem too bad if you were killed off quickly. You got to be celebrated, adored, dressed up in beautiful clothing... the only bad part was that it wasn't really for you, but for the sick people who liked watching kids be hurt.
She sighed and looked at her partner, then at the screen broadcasting everyone's faces. It made her wonder who would come out as the victor of these games.... and if any of them truly deserved to. 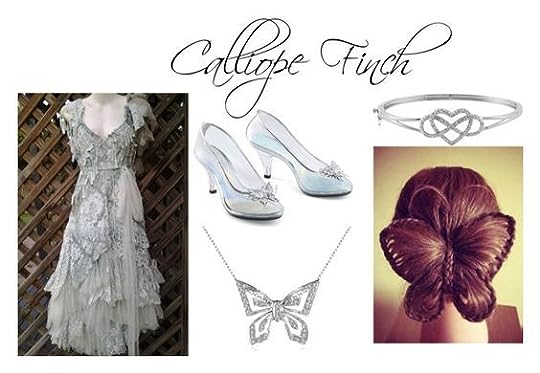 (hide spoiler)]
"Alright, onto our next tribute!" Ceaser grins widely at the audience, before gesturing for the stagehands to send her onstage. "Please welcome the lovely Calliope Finch!" The audience teems with excitement, but the girl doesn't show. Instead, she stands nervously in the shadows, knees quaking as she looks at the stage. People are talking, but all she hears are muffled words. She's about to take a step back and ask them to let her be a no-show, but suddenly the foot she'd lifted to put back is the one she uses to catch herself after they push her into the spotlight.
She's a dear in the headlights before this massive audience; her muscles are frozen in place, refusing to let her move another inch. She can't see past the first two rows of people, but that just makes her feel worse because how many people are really in this room with her? A hundred? A thousand? Surely not everyone in the country, but somehow her mind says it might still be a possibility. Then, one voice breaks through her terror.
"Callie, Darling? Why don't you come take a seat?" The girl looks at the man in front of her as he takes her hand. He gives her a small tug and, after a brief moment of hesitation, follows him to the seating area in the middle of the stage. "There we go! Now, just keep your eyes on me. I've made them promise to be quiet, and you can simply ignore that they're there, okay?"
Callie looks down at her hands, then back at him and gives a small smile with a nod. She's obviously still terrified, but at least she's responding. "Great! Now, I do have a couple of questions for you, okay?" She nods and fiddles her thumbs in her lap.

First of all, what is it like being in the capitol? How different is it from your home?

W-well, I, uh... I really love how our clothing is applied here. Everyone I've seen looks so vibrant. In the district, we're working all of the time, so there's no reason to wear the things we make. But here, everyone looks so great!
The crowd claps quietly, but it seems as though most of them were trying to respect Ceaser's request. Ceaser laughs lightly. "You're too kind, Calliope."
I try to be.

Speaking of outfits, you look quite different than you did on the chariots.

Oh, well the chariot outfit wasn't really... I mean, it was beautiful, but... I feel more comfortable like this. She gives a small smile.
"And why is that?" Ceaser asks, leaning forward with interest.
Well, that felt way too grown up for me. It was so long and... attention seeking. I'm just not like that.
"And those heals!" He adds with a gasp. Callie laughs along with the audience before she responds.
Yeah, the heels were really bad. When our chariot started to move, I lost my balance and almost fell off!
"You grabbed onto your partner for help, if I remember correctly, and held onto him for quite a long time."

Tell me, is there anything... spicy going on between you two?

Calliope's face turns bright red.
N-no! At least... nothing I know about. I don't like to be noticed by people, really, so I doubt he even knows who I am. If anything, I just bugged him when I did that. But... I would like to find romance someday. I know a lot of tributes find it in the arena, but I'm sure I won't. Maybe if I win, there'll be someone that I... I don't know.

You said "maybe" you'll win. Are you not going to try?

Oh, I'm definitely going to try, but.... I'm not really much of a fighter. If I think there's a person who can do more good than me if they get out, I'll do my best to help them survive, but if not, then I can't let my life go to waste. I want to help people - that's all I've every wanted to do in my life. And I'll do whatever's best for the greater good for these games. If that means that other people have to die so that I can save others outside of here, then that's what I'll do.
The audience erupts into applause and suddenly, Calliope realizes that this whole thing was onstage, and she smiles, grateful for Ceaser's help through this interview. The alarm sounds letting them know that her times is up and she accepts Ceaser's hand, standing with him and accepting the attention for once.

Ladies and Gentlemen, the female tribute from District Eight, Callie Finch!
Callie curtsies as Ceaser bows his head to her, then she gives a small, nervous smile to the audience as she curtsies to them, too. As Ceaser claps with the audience, she turns away and returns to the shadows offstage where she feels infinitely more comfortable.