☆ ¸.•*´¨) ¸.•*¨) 1DAY UNTIL
(¸.•´ (¸.•` Beg For Mercy~ A Dark Conclusion Coming 8/18 ☆
Do you plan to purchase and review Beg For Mercy? If so this may be of interest to you >>>http://bit.ly/1eBTCdr
Fifteen minutes of huffing and puffing later, they had Sade at the bedside in one of the spare rooms, both of them sweating. “Let’s take a moment,” Mercy said, sitting on the bed. Liberty did the same, not arguing. They sat in the silence catching their breath and Mercy thought about how they were going to get him onto the bed. Maybe they didn’t need to. They could secure his one arm and leg to the bed frame and she would… find other things to secure the other side. “We have any kind of chain?”
Still breathing hard, Liberty shot her thumb behind her. “There’s a supply room. I can dig around.”
“Look for something we can anchor into the floor, something he can’t pull out.”
Liberty went in search while Mercy inspected the bed. It wasn’t sound enough, he could probably break it. She found a spacious spot on the floor. They would have to just put four anchors into it.
Like a bed only… not. She yanked all the bed covers off the bed and made a pallet on the floor where she’d roll him. She’d put the anchors first so she could secure him immediately after she rolled him there. In case he woke up… sober.
She didn’t let herself think about what he’d say or do when he did finally wake and find himself restrained. It was doctoring time for him. And she’d just deal with the angry patient syndrome later.
****
Vomit burned Sade’s throat just as he fought to turn on his side and puke. His hands and ankles were held by something and he only managed to turn his head. “Hey!” he yelled, his throat feeling swollen.
“Oh my God, I’m coming, I’m coming.”
Sade fought to focus his eyes and clear his mind. Mercy. Mercy and those words, oh my God, I’m coming I’m coming translated to one thing for him, but it was said from far, in some place where he wasn’t and it lit an insane fury in him.
Where was he? When was he? What the fuck, why was he tied?
She flew into the room and the first thing his mind saw was that she was fully clothed—blue jeaned shorts and white tank. “I got you, I got you.” She knelt next to him and lifted his head. “Just turn if you need to vomit. Damn, I was worried this might happen.”
“What… the fuck are you doing? I can’t turn, why am I tied?”
“I’m sorry,” she whispered. “But you made me.” He struggled to make sense of the sincere words. “And this shouldn’t surprise you,” she said with light flippancy. “You should know if you
become a threat to yourself that I’ll do this. You should damn well know it.”
“Th…” He shook his head out of her hold. “The fuck do you mean?” He remembered shit now. She was supposed to be on the boat, with her father. Safe. What are you doing here?”
“I decided to stay behind.”
“No fucking shit,” he gasped. “Un-fucking tie me, Mercy.”
“Be right back.” She ran off and entered a door in the room and he heard water running. “And I’m sorry,” she called from inside it, “I can’t untie you, not happening.” She returned with a washcloth and wiped his mouth and dabbed it along his body.”
She’d fucking stayed behind? And now she’d fucking tied him up?
He yanked on the restraints and growled, looking around now.
“Where the fuck am I? Where’s Liberty!” he demanded.
She looked at him, her green eyes flashing with anger. “What the fuck does that matter!”
She shot up and went back to what had to be the bathroom. He looked all around. He was on the floor, on blankets. His arms were at his side, nearly immovable except for maybe four inches. His ankles the same. “How’d you… holy fuck you installed shit in the floor?” He stared at her when she came back into the room. “I need to fucking piss Mercy.”
She knelt at his feet and adjusted what looked like washcloths between the chain and his skin before standing and heading back to the bathroom. “Got you covered, there,” she said.
She returned, unscrewing a small mason jar. “Fucking Christ,” he said, “you’re serious?”
***Paperback Pre-order Link>>>http://lucianbane.com/2061-2/
Add to your TBR: http://goo.gl/1MLxm5
Read the first books in the series:
☆Mercy: A Dark Erotica☆ *SALE ‪#‎99Pennies‬**
Amazon Links: myBook.to/MercyLB
‪#‎FreeOnKU‬
☆No Mercy: A Dark Coninuation☆
Amazon Links: myBook.to/LBNoMercy
#FreeOnKU
Would you like to join my Dark Erotica Group and help with the creative process? You can join here>>http://on.fb.me/1PN8NBD
Would you like to sign up for the Beg For Mercy Blog Tour? You can do that here>>>http://bit.ly/1Ij9WKL 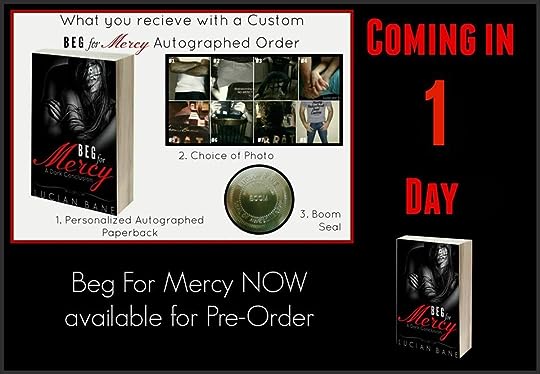 Things are getting tense.....

1 More Day, Thank you Jesus!!
And woohoo getting me a paper too ;0)

Tomorrow,tomorrow, the book will be out tomorrow!

I can't believe it's almost here. So excited for this.

Not gonna be able to sleep I am so excited!

It's Beg for Mercy eve! Can't wait for more Sade and Mercy tomorrow.

So excited... Can't wait to one-click!

You have to love Mercy and her tenacity! Sade has met his match! ONE MORE DAY!!!

Today is going to be the slowest day ever!!! Can't wait for this!!!

I am so excited and anxious for this book!! I feel like I'm standing outside the virtual bookstore saying..Open..Open ..Open!

I love this, the thrill of knowing u will be getting an amazing book to read , something u have looked forward to for so long ...and now tomorrow it will be on my kindle. I have looked forward to many books but the anticipation i feel for Beg for Mercy is incomparable. Tomorrow night I know I will be completetly satisfied.

Just a few short hours and Beg For Mercy will be on my kindle...doing the happy dance!

It's not live yet, but soon.

It's not live yet, but soon.

Thanks! The time difference must be my issue :(

It's not you. It is at Amazon and stuck in "review"