Mod
Claude Houghton (1889-1961) gained a cult following in the 1920s and ’30s with his unusual psychological thrillers and counted Henry Miller, Hugh Walpole, J.B. Priestley, and Graham Greene among his many admirers. This first-ever reprint of A HAIR DIVIDES (1930), originally published the same year as his masterpiece I Am Jonathan Scrivener, reproduces the original dust jacket illustration and joins four other classic Houghton novels also available from Valancourt. 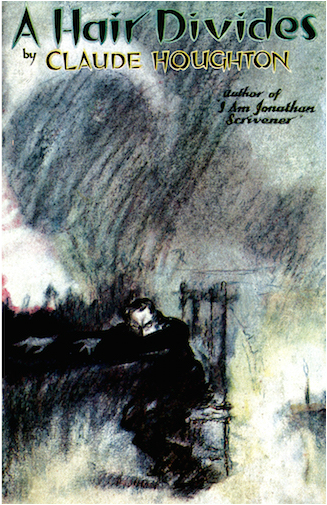 Gordon Rutherford, a young writer, finds himself in a dangerous dilemma when he is the only witness to the accidental death of an acquaintance. Because of the strange circumstances of the case, Rutherford knows that if he goes to the police he will almost certainly be accused of murder. But if he disposes of the body and conceals the accident, he will destroy any chance of proving his innocence. The terrible decision Rutherford is forced to make – and the even more terrible consequences that follow – form the plot of this intriguing novel, a mystery unlike any you have ever read.

“Combines originality with intelligence, displaying, particularly, great gifts of imagination and psychological insight … a new type of thriller … one of the best pieces of work in English fiction of recent years … a first class novel.” – Saturday Review

“Surely one of the most original of English writers who have established themselves since the War. In the plainest sense his books are like no one else’s … always the most vivid of story tellers.” – The Times

“He is an extremely interesting novelist, and a genuinely original one.” – J.B. Priestley

Mod
Thanks Matthew! We may do one or two more Houghton titles if people enjoy these.

Just finished I Am Jonathan Scrivener and loved it. I will definitely be picking this one up.

This one sounds great! I still have to get I Am Jonathan Scrivener...

Nolan wrote: "I would definitely get it as soon as possible, Kimberly. I can't recommend it enough :)"

It was that good, huh?

I really loved it, too!

Maxine wrote: "I really loved it, too!"

You guys are killing me. ;)

Nolan wrote: "I would definitely get it as soon as possible, Kimberly. I can't recommend it enough :)"

LOL--nothing like peer pressure to make me want to slack off on the reviews I'm supposed to be doing ;)

Char, you haven't read it yet, either?

I just picked up a copy of I Am Jonathan Scrivener :) Didn't realize it was at such a bargain price! I have so many books I wanna read but I'll definitely be making time for this one.

Sorry guys... but it's for a perfectly good reason ;) I guess the old saying of "dogs don't bark at parked ca..."

(And it's also some sort of rock band, apparently.)

Kimberly wrote: "Nolan wrote: "I would definitely get it as soon as possible, Kimberly. I can't recommend it enough :)"

LOL--nothing like peer pressure to make me want to slack off on the reviews I'm supposed to b..."

Kimberly, no I haven't been able to read Scrivener yet. I plan to read it within the next week or so, I hope.