☆ ¸.•*´¨) ¸.•*¨) 2 DAYS UNTIL
(¸.•´ (¸.•` Beg For Mercy~ A Dark Conclusion Coming 8/18 ☆
Closing herself inside the large closet with the half slatted door, she crouched on the floor, listening. What if they didn’t go upstairs? She reached up and felt around on the door handle for a lock, realizing it was stupid that they would have one in a closet.
Her heart hammered in her ears, making it hard to hear. They were definitely inside. Mumbling and low laughter reached her itching ears. Female. When she heard his laughter, a fire exploded in her stomach, making her nauseous. What the fuck was he laughing about, how dare he laugh, Mr. depressed twenty-four seven around her. God, that laughing lying bastard.
She waited in the closet, fighting the pain by feeding her fury. Sweat soon dripped off of her in the hot box. Did they plan to stay downstairs? Shit. She hoped they did but that meant she wouldn’t know what they were doing. She realized it had gotten quiet. Had they gone outside? To the pool? To the patio swing? To visit like best friends?
The idea that he was with another woman in any capacity had her trembling with so many emotions, none healthy for her or anybody else.
This was bullshit. She opened the door and stuck her head out, gasping on fresh air. She crept her way down the stairs, head leading first, trying to see what she could see. She finally spied something that made her heart leap in her throat. Flying down the stairs, she raced to Sade, face down on the floor.
“Shh!”
Mercy jerked her head up to find Liberty in the corner with her finger on her lips and shaking her head.
“Don’t disturb the sleeping giant,” she whispered.
Mercy looked down at him, hearing him snoring.
“It wasn’t easy to get him to drink that last drink with the Ambien but I finally did. Wondering where you were and when you’d get down here. Your father is the one who asked me to stay behind,” she whispered at seeing Mercy’s confusion. “He was worried Sade might try something stupid. And don’t worry,” Liberty said, hands up in innocence, “your dad decided that before he thought you were staying behind. Not that he’d have changed the plans since you seem to be gasoline to Mr. Sade’s fire.”
Mercy leaned back on her haunches in utter relief. Thank you God, thank you. It wasn’t what she’d feared.
“Where the hell did you guys go?”
“To the local tavern where he drank himself to shit,” she hissed, not happy.
“Barely got him in the house, had help getting him into the car but getting him out was another matter. And then…” she shrugged with wide amazed eyes, “he got out and actually walked. The next thing I know he’s wanting to swim in the goddamn ocean, so I helped put him out of his misery before he found a way to conveniently kill himself.”
Fear gripped her at how accurate that likely was with him. Once his self-destruct missions hit, they were nearly unstoppable, shy of tying him up. She looked up at Liberty then, sick that she’d misread everything. Sick that Sade was this bad off, and she’d been busy with jealousy.
“What?” Liberty wondered, cautiously.
“Can you help me get him to my bed? And then help me secure him?”
“Secure him?”
“As in tie him up,” Mercy whispered, worried he might hear. “When he wakes up and sees me here, he’ll leave.”
The look on Liberty’s face said she knew that was true. “Jesus,” she muttered, flopping back in the chair like she was tired at just the idea of the task. “You realize how heavy he’s going to be dead weight? And he may wake up!”
Mercy chewed her lower lip and looked around. “Maybe we can rig something up.”
“Like an elevator?”
“Like an elevator, yes,” Mercy said, undeterred with her sarcasm.
“You’re serious,” she said, fascinated.
“You just said he’s a threat to himself. You know he’ll try to leave when he wakes up.”
“So you’re going to tie him up,” she said, as though making sure she was understanding her exact intentions.
“Restrain him.” Medical procedure, dummy. “Like they do in psych wards when people are a threat to themselves?” Where did you get your training, she wanted to ask.
She eyed Sade, head slowly shaking. “How are we supposed to get him up the stairs, why not take one of the spare bedroom downstairs?”
“Yes!” Mercy realized. “That would work.” Quickly standing, Mercy looked around. “We could… roll him onto a blanket and drag him?”
Liberty thought a moment before her mouth turned down with an impressed smirk. “We could manage that.” 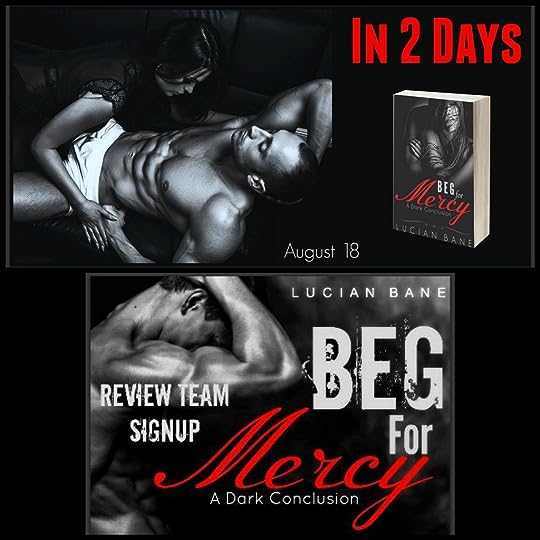 Ohhh Sade you are in for it now. Haha
Hurry the hell up Tuesday I NEED this conclusion. ;0)

Time is moving slowly waiting for this book!!!

This is getting better and better

Another closet scene? OMG, Lucian, I am loving this book How pissed is Sade going to be when he wakes up? We'll find out in two days!

2 days is to long! So ready for more Sade and Mercy ❤️

It's almost release day! I can't wait! I have to see how things play out between everyone. I hope Mercy gives Sade exactly what he deserves.

Just finished Mercy and No Mercy again! Oh what will I do until Beg for Mercy comes out!

Oh hell..I love it! I need to know how this turns out!! So EXCITED for Tuesday!!

All our questions will finally be answered and all will be right with the world :) Lucian Bane knows how to build suspense and I have found myself more than once stressing out (in the good way) while reading this series. I love Sade and Mercy: great characters and great story is all a reader can really ask for right?

I think Mercy should tie him up and sing Katie Perry songs in opera until he agrees to talk to her! Really Sade?? Drinking your problems away? That right there would be cause for such suffering! All I can say, is "welcome back kick ass Mercy"

Anticipation....makes it that much sweeter!
I agree with you Tammy..... 2 more sleeps

How nice will it for Mercy be to have Sade restrained? The images are thought provoking to say the least!

Sade, tied up again! I can only imagine how pissed off he's going to be.

Its finally getting closer!! The anticipation is killing me!