24 views
Do you think love can conquer and set to right their future?

Do you think love can conquer and set to right their future?


“Don’t worry,” Ralph called out, “I brought my lighter gear for the women.”

“Lighter,” Sade’s mom balked, “You can keep it, I want the tough stuff. I plan on catching the biggest fish! I’m apparently very good at catching nice, strong, fish.” She wiggled her brows at Kane who pulled her into his embrace with a chuckle.

“You’re likely to catch Godzilla with your beginners luck.” Her dad pecked her forehead and intimate kissing bloomed from there with sounds that belonged in a bedroom.

“Get a room, geeze,” Bo muttered, passing them.

Mercy finally allowed herself to look for Sade all around. “Anybody see Sade?” she asked.

“He mentioned getting a few groceries in the village. Liberty took him.”
Panic stabbed her. “I thought she was sick?” Mercy said before she could catch herself.

“Exxxactly what I said,” Bo raised his brows. “Like I said… she’s just chicken of the sea.” He busted out laughing at his own joke while Mercy’s gut churned with fear and fury.

Mercy laughed and smacked his shoulder while barely hanging on to her act. By some miracle, she managed to help with the packing, all the while plotting in unhealthy fury. What the fuck was going on? Something was. Going into town for groceries, my fucking ass. Mercy thought back to the events of the previous week with Liberty in the scenario. Mercy hadn’t been great company with Sade being distant with her and now that she thought about it, Liberty seemed just fine with that. At the time, Mercy was relieved to not have to deal with talking when she was miserable, so she never thought twice about it.

Mercy froze at recalling an incident. She’d walked out and found Sade and Liberty chatting on the porch outside. She hadn’t thought anything of it once Bo had come out and they began their love play. Then Sade had made excuses to be somewhere else as usual, and that was all Mercy could think about. Him leaving her presence. Again.

But now…. Now she couldn’t help but wonder if he left for other reasons. The thought made her need to vomit.

An hour passed and Sade and Liberty still didn’t return. Was she the only one that found that odd? She wanted to ask questions, like when did they leave and how long was it supposed to take to get a few groceries in a village supposedly close enough to ride a bike to? If it hadn’t been for Ralph coming over, she wasn’t even sure there was a village with the exclusion of the beach house.

Mercy opened the fridge, fighting panic. “You ready sweetheart?” her dad asked behind her, making her jump. “We’re all loaded up.”

She turned and took a deep breath. “Dad…”

He pulled her into his embrace. “Oh honey,” he murmured. “Are you feeling sick too?” he half joked.

“I know you are, I’m not blind. He needs a little space is all, he’s dealing with a lot of things. He’s a special kid, but he’s a very good kid, okay?”

Hearing her father defend him gave her conflicting feelings. “I know,” she whispered, keeping her voice low. But she didn’t know, was the problem. She didn’t know anything anymore. “Dad?” she asked, looking up at him, fighting down the sob in her throat. “Am I… much different than before the accident? I mean I feel like I remember everything but then maybe I’m not, maybe I’m acting weird and different and I don’t realize it?” she gasped, swiping the stupid tears.

“Oh honey,” he said, pulling her back into a hug. “You’re the same beautiful Mercy you’ve always been. Maybe even more so.”

“You’re not the right person to ask that,” she mumbled.

“I most certainly am,” he assured. “I wouldn’t poo poo around about that.”

She smiled against his chest at the poo poo term. “I know you wouldn’t.” He’d always gone out of his way not to use harsh language in front of her. It used to offend her because she felt like he was saying she wasn’t mature enough to handle it. But now… now she realized he did it because he respected her. “So you won’t be mad if I don’t’ go?” 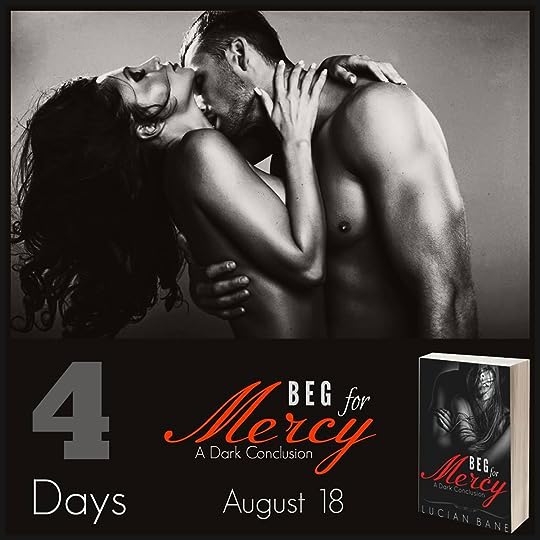 *Girly scream* i canr hardly wait!!! Not sure i can hold out much longer....im dying to peek at those teasers!!!!

Was on the verge of years reading this snippet.

OMG another snippet that has me so excited for more Sade and Mercy in Beg for Mercy!! 4 More days until Beg for Mercy has my kindle begging for Mercy!

It's getting so close!

I most definitely think love can bridge all of the space that's developed between Sade and Mercy. I'm thinking it won't be easy though and therein lies the challenge for amazing writing skills of Lucian. I'm really enjoying learning about Sade and Mercy's relationships with their parents, too. I'm excited to see how this all plays out!

These snippets have been blowing me away..not much longer to see what the whole book is going todo!!

Any way to hurry this along? I am getting impatient~!

Can't wait so excited for the release of this book!!!!

Losing my mind waiting, guess it is time to read the first two again now:)

Can't wait for the conclusion!! Anxious!!!!

One of my favorite series about to get wrapped up and I'm going to savor it!

The wait is unbearable!!!!!

The wait is killing me, I need this book now. I have to know how it ends :)

Omg. 4 more days. I have the shakes just anticipating the wait lolz

The wait has been brutal for this book because I'm so excited to read it!!!

I just re-read No Mercy and I loved it all over again. Now we get to find out the rest of the story In #BegforMercy in just a couple of days now. I know it will be worth the wait.

Cant wait!! It's so close