First off, do you have any ideas?

Have you ever seen Interview With a Vampire?

Heard of it, never seen it.

This is the basic plot

So it takes place in the late 1700s. A human has lost their family and wishes to die so he can join them. A vampire bites him and nearly drains him. A few days later, the human is ill and does not want to face death again after their experience. The vampire comes to their room and offers them the choice to be immortal. The vampire bites the human and nearly drains them again. It offers the choice again and the human excepts. The vampire turns the human into a vampire. The old vampire must then teach the new vampire their way of life. The new vampire is rebellious to killing humans at first, but then they warm up to it

Do you want to make characters or just go in?
(Also is it okay if I use Anime pictures for this one?)

Okay I'll let you go first so I can see how I should do mine.

Personality: Louis is a quiet person who keeps to himself. He was once a happy young man who enjoyed the company of others, but when his family was killed while sailing to France, he lost the will to love and to live. 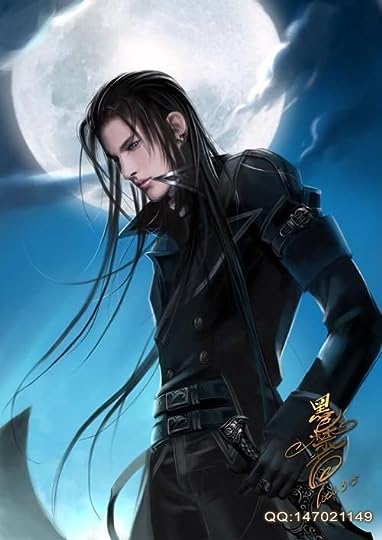 Brief History: Louis was born into a wealthy family. He owns his own plantation and a few number of slaves. Unlike his father, Louis treated his slaves with respect and kindness seeing that they were people too. After the death of his family, Louis started going to the tavern to drink his sorrows away, and he prays for death every night.

Age: Immortal (so a big age)

Personality: She is very emotionless and only seems to care about Louis's protection. She also is pretty smart and manipulative.

Brief history: Carla used to care for humans a lot, but learned the hard way when she had to watch them eventually die since she was immortal. So, that eventually made her emotionless. She is also, very high up on the vampire council since she is powerful.

Sorry that took a while! Do you want to start or me?

Louis stumbled out of the tavern with a half empty bottle of beer in his hand. He hummed softly to himself as he walked down the empty street, tripping a couple times.

Carla had her cloak on as she walked down the streets. She looked around warily before looking over at a tavern. She watched quietly before looking forward and walking again. 'There seems to be a lacking of vampires.' She remembered saying to other members. 'I think we should recruit others. It's very beneficial.' Now here she was in search of a new vampire. Though, she needed someone to be worthy. To also, be able to do her a favor in the future.

Louis kept walking until he had reached the docks. He tilted his head back and chugged down the rest of the beer. He chuckled slightly, tossing the bottle behind him. He fell backwards and laid on the wood deck. He stared up into the sky quietly.

She had followed a certain man to the docks and watched him quietly. She watched as he tossed the bottle back, she caught it and looked at the labeling before teleporting it to the ocean. She walked forward and then stood in front of him, but he couldn't see her. She watched him before speaking up. "Do you do this often, human?"

He looked up at the beautiful woman standing in front of him and closed his eyes. "Why not? Life has no meaning anymore," he said quietly.

She smirked slightly to herself. She stepped back. "I can see you're yearning for death is at it's high. What's your name?" She said calmly and stared down at him. 'He could be a excellent choice.' She thought.

He opened one eye staring up at her. "Louis.. And what is your name?" he asked her.

"Carla." She said with a small grin. She sat down besides him. "What has you so gloomy that you would get wasted and wonder out to the docks?"

He grunted lightly and sat up next to her. "Well besides the fact that my family has died out at sea, nothing I can think about.."

Her fingers twitched slightly. But, she stopped herself from doing anything other than what was asked. "I see." She watched him. "So, you're doing this to herself."

He chuckled darkly, closing his eyes. "What is even the point anymore..? I lost everything that day. I can never get them back," he muttered lowly. "I should die too," he added.

She looked at him then stood. "I want to show you something." She said. She could feel her fangs already out. She held her hand out to him.

He took her hand and slowly stood. "What is it?" he asked opening his eyes.

"A deal." Before he could even blink, she had her fangs in his neck. He thought he had a weird taste, but it wasn't bad either. 'Remember your plan.' She thought to herself as she drank his blood.

A small groan of pain escaped Louis' lips, but it turned into a moan of pleasure as it started to feel amazing to him. He began to go limp as she continued to drain him.

She suddenly stopped and just dropped him on the floor. She looked down at her. "I'll visit you again soon, we can discuss a lot more than here." She smiled before disappearing.

Louis groaned slightly and weakly tried to get up. He then dropped down on the ground and passed out from the blood loss.

Before leaving she had teleported him to a nearby hospital. When she arrived in the castle where all vampires lived she quickly walked down the hallway.

Louis woke up and almost instantly started having a coughing fit. He groaned lightly and sat up in bed. He slowly stood up and grabbed his coat that was sitting next to the bed. An old woman came in and stared at him shocked. "Mr. Du Lac! I didn't know you were awake.." He walked past her saying, "I'll let myself out madam.."

(Do you want to time skip to the moment she comes back?)

After a week, she decided to return. She held out her hand. "Louis." She muttered under her breath before appearing wherever Louis was.

Louis was laying in bed suffering another coughing fit. As soon as he saw Carla, he pulled out his pistol from underneath his pillow and pointed it at Carla. "What are you doing in my house?" he said in a raspy voice.

She looked at the gun like he was just holding a toy gun out. She took it out of his hands and tossed it. "I'm going to talk to you able the deal." She said calmly.

He glared up at her from his bed and slowly sat up. "What deal..?" he asked quietly.

"You can live without suffering or pain. Also, there's a reason why your ill now... I can fix it. If you agree to do me a favor in a feature, I'm willing to help you." She said. "If not... You don't want to know what will happen."

He thought for a minute about the consequences of this deal. He knew very well what she was offering to him, but he wasn't sure if refusing would be his best choice. My family wouldn't like to see me die so soon.. He sighed softly and looked up at her. "Alright.. What do I have to do?"

She pulled a knife from her cloak and cut her palm. "Open your mouth and lean your head back." She started to whisper something under her breath as she walked towards him, her palm dripping a little with blood.

Louis frowned slightly. He didn't like the idea of consuming blood, but he knew it had to be done. He tilted his head back and opened his mouth.

Once she was done chanting she held her hand over his mouth and let blood fall in. She waited until it was enough and drew her hand back. The cut healed back quickly and she looked at Louis.

Louis' eyes widened as the blood filled his mouth. He expected it to be disgusting with a metallic taste, but it was sweet and soft going down. He was about to grab Carla's wrist to drink more, but he suddenly felt horrible pain in his heart. He laid back on the bed grabbing at his chest.

"You're heart is stopping by now. Which means you're apart of us." She said with a smile. "Immortal vampires."