Mod
Please use a detailed template! 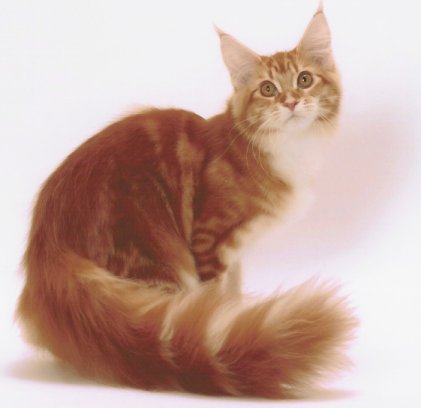 ~*~History~*~
When Morningflower was a kit, she always was helping other cats. She helped the other clans build their clans, even though she was forbidden to. She grew strong bonds with the other clans, and was respected by all cats.

Morningflower was one of the first cats to go to StarClan. She was killed in the massive battle of the Clans, and was chosen as Head Messenger because of all her ties to the other clans.

Personality: tends to be very nice and understanding, even of those who break the warrior code.

History: it is far too long to even fit so short version.....he was born long ago, back when the idea of a Clan was new. he eventually became the first Elder and was honored for a very long time.

❝I they best way to lie is to tell a little truth.❞

❝What can I say? It's not like I'm dead inside.❞

{ Personality }
»Riverspirit is shy, although around friends she can be herself. River is am amazing cat, and dosen't like to dwell on the past to much. Shes all in all outgoing and trys to make the right choices no matter what.

{ Apperance }
»River has a base coat of brown, with lines and stripes of white. Her eyes are a teal colour, and has white paws with markings under her eyes, as well as a lock over one eye.
{ Photo }
» 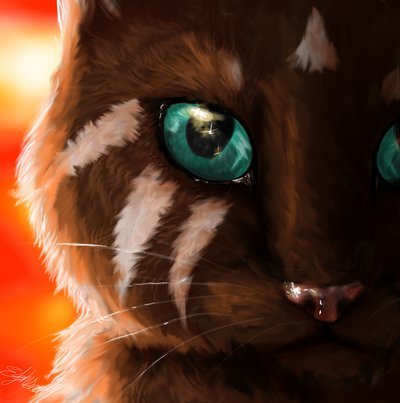 { Histroy }
»I grew up in a huge city with towering Twoleg nests that brushed the clouds. A place where no stars shone at night, and the stink of monsters hung in the air. The city was ruled by a group of cruel cats, who wanted nothing more than to rule over everything. Although their group started small, the leaders, four ruthless cats, began to recruit members until there were only a few loners left in the city. Anyone who didn’t join didn’t last long, and if anyone tried to leave the group, they were tracked down and killed. Escape was nearly impossible.

My father and mother were loners, but they joined for protection. That is, they joined to avoid trouble with the city cats. My father climbed the ranks until he was a trusted member of the group, while my mother tried her best to avoid any real connection with them. When she found out she was pregnant with my siblings and I, she tried to run, but my father followed her and forced her to stay. He had changed because of the power and promises of the City Cats. He believed that they were going to find a better place to rule, a place rich with prey. My mother could not talk sense into him, so she was forced to stay. When we were born, my father took us away and put is into the training program that one of the leaders, Fang, had invented. The first lesson I remember very clearly. The city cats would take one of their prisoners; a loner, housecat or deserter, gather all the kits, and rip the cat apart right in front of them... The teachers told us, 'This is how the world works. The strong always conquer the weak. If you’re weak, you better run or die.'

We were forced to endure horribly difficult training. Many died, including my sister, Emerald. My two brothers and I were able to survive, but only because of my mother. She tried to teach us her own rules, and taught us defense whenever she could. She would hide us away and tell us the most wonderful things: how the world was more than kill or be killed. I grew up learning how to fight and defend myself, but I also grew knowing the meaning of true family. Of course, the city cats did not agree with what my mother told us. They said it made us weak. And one day, they came for her. We were taken to my father and my mother was imprisoned. Under my father’s guidance, one of my brothers, Dusk, became corrupted as well. Cloud, my only remaining sibling, and I never forgot mother’s teachings. One day, she came to us in the middle of the night. She had escaped prison, but not for long. She told us she was going to try to run, and that we should come with her.

That night, we left the city. Our escape was going smoothly until someone on watch saw us. My mother stayed behind to fight and told my brother and I to keep running. There was nothing I could do, and I had to get my brother out safely. We ran and ran until we reached the forest across the roads and fields around the city. I paused at the top of the hill, right at the forest’s edge, and looked back, but I didn’t see my mother. I heard voices, pursuers coming after us. Cloud and I ran into the forest. It was pitch black, I couldn’t see a thing, and at some point, Cloud and I were separated. I kept running and running, I knew that I couldn’t stop and look for Cloud because I couldn’t risk being caught. When I finally stopped, dawn was breaking, and I was alone. Since then, I’ve been walking. I promised myself I would find someone to help me go back and rescue my mom. I know she’s alive, just like I know those cats are going to start seeping out of that city and conquer the land beyond. They talked about it all the time in their lessons. They said they would call it the Golden Day, when they had control over everything, from horizon to horizon.

Soon, I had walked so far into the forest to find help for my mother, I stumbled on a large group of cats, they said they where from ForestClan and insisted that I came with them. The small group of cats kept going on about how weak, and frail I looked, but the thought of getting back to my family blurred my thoughts. Soon I was in a large clearing, and many more cats where there. Gazes mixed with kindness, anger and so many more feelings where placed on to me. I met what they called there "Leader", and asked, begged for her help. She said that she helps her Clan and her Clan only, and that the city was too far away to do anything away. Although I did warn her about the fierce cats that lay there, and there plans to rule, and take over more than the City, she pushed it aside. Letting me stay until I was a full strength. She said that I could stay with them, and since I was a kit, there would be room for me. I did not accept the offer, although having a large family, and loyalty with trust across so many cats did sound nice, I had to help my mother.

Once I left, I came across a few other Clans. I soon learnt what StarClan was, what the Warrior Code ment to them and so on. Although, I did not really trust them at first, I soon started picking up there ways. None of theses "Clans" wanted to help me, so I wen't back to where I came. It was grean-leaf, thankfully and there was lost of pray to help me along my way, although nothing could help me for what I saw next. Walking, I was growing sleepy, the sun was setting and I knew I didn't have much light left. I was very close to the City when something caught my eye, It seemed like a load of cats, lined up one by one, and they where falling to the ground, one at a time. I wanted a closer look, was someone killing theses cats? The thought pondered in my mind until I got a better look, hiding in some shrubby. And my thoughts where right, one cat, along with a few other cats standing around where quickly killing theses poor cats like there where some pray! Although, I found my mother among them, I did not make eye contact with here, and I still don't know if she knew I was there. When it was her turn, I ran, turning and heading back to the clans.

ForestClan didn't help me still, even when I said it was for there own sake, but then again, who would put there trust into a kit? Having nothing left, I joined the Clan. Living by there rules and way. I soon learnt the naming system, and was old enough to become an apprentice getting my name Riverpaw. I lived in fear that the City cats where going to come and take over ForestClan, and my thoughts where right. They killed, and took over two Clans, our Clan and another still standing. Being trained by the leader, I had the best training, and soon became a warrior. But, my name was soon taken from me. The City cats attacked our Clan at night, killing the leader, a lot of cats and me. My father was in this crowd of City cats, I could smell him, although I didn't ever see him. Once dead, I came here, to "StarClan". I watched as the City cats tore up the Forest, and left.

Soon, though, I saw new Clans form. The Oldest, BloodClan, witch some blood of the City cats are in there. And the newest, DuskClan. I watched as DawnClan, RippleClan, DuskClan and BloodClan grew from nothing. My heart was shattered, although. My mother, my brothers and sisters where not with me. It still hurts, even today, but I try not think about it to much.

Mod
? O.o oh, and sorry if my responses are slow. I had to get a shot yesterday on my left arm in the muscle (I'm ambidextrous, (but no one believes me!), but my left hand is dominant.), so it's kind of stiff and it kind of hurts. :(

.....i was about to say, 'Could be the Chicken Man.' people he's after tend to smell him before they see him.

Demon Dragon wrote: ".....i was about to say, 'Could be the Chicken Man.' people he's after tend to smell him before they see him."


~*~Former Mentor~*~ Not Mentioned as she joined at the warrior age

~*~Personality~*~
~~ ~~ ~~ ~~ SnowyHeart is a sweet she cat but shes can be a bit bossy. She loves to hunt and she is always ready to send a message. She may miss her family but she still visits her daughter from time to time. 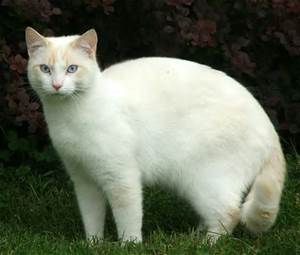 ~*~History~*~ Though she was born into a clan she was sent to live with her kittypet father. SnowyHeart was killed in a battle by her own mate when he wanted to kill their kits. Since then she has been living life very interestingly in StarClan.