The leaders den in placed in the middle, but at a side in the clearing. Covered by most of the leaves, its warm and safe.
(view spoiler)[ 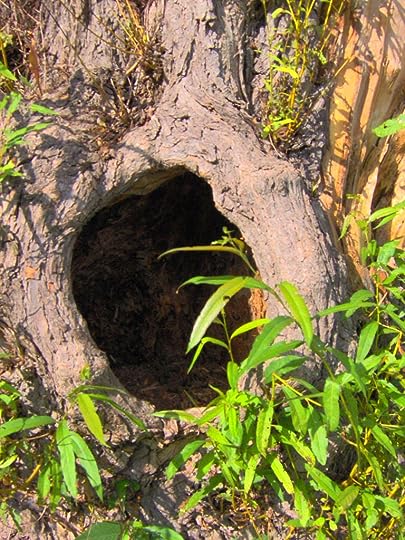 As Darkstar, Moondust and Moonkit entered, the den was bigger than it seemed, with enough space to fit five cats. Darkstar settled down with Moondust next to him. "Ok, Moonkit~" Darkstar started, "I am going to explain DuskClan, ranks, cat names and more. Do you have any questions?"

"Ok then, very well. Before I start, I will be taking care of you, and I will be you..."Farther"." He said. "Now, DuskClan was built from only a few cats who didnt trust one another, one of them being me. Theses three cats turned into six, as more joined, and then more, and more. Cats everywhere helped build the clan we now know as DuskClan." He explained quickly. "We made ranks, with other Clans we found, we soon caught of there ranks, and know we have the same." Darkstar then went on to explain what order the ranks where in, what power the ranks held over other cats and so on. "Now, cat name, like mine, Darkstar-" "And mine!" Moondust butted in. "Yes, and like Moondust's all come with a meaning, and a charge. And Kit, like yourself is names Moonkit. With the parents first name, and there ranking last. As you carry on your life, you will turn into a apprentice, where you will get a mentor and train to become a warrior. Your name will be changed to Moonpaw, as a sine of your hard work to become a strong warrior. Once a warrior, the leader, say I, will chose your last name. It will portray your personality, and your trust towards the clan. If you become a deputy, your name will not change, but once a Leader, your name will change to Moonstar, like mine, Darkstar. You get given nine lives, and its your duty to lead the clan until your end."

Mod
Moonkit looked at Darkstar with big eyes. She listened, taking in every word. She was going to have to remember everything he said to stay here. "Who's going to replace my mamma?" She asked, looking at Darkstar with her large, green eyes.

"I am sorry to say, the queens and kits of there own, and though its blooming in there, there is no room." He said, talking in a more softer voice. "Do...You mind talking about what happend to you?"

Mod
Moonkit shuffled her paws. She told him what happened to her mother, her siblings, and how she had wondered around for a moon in great detail. When she was finished she looked at the ground, a small tear forming in her eye.

Mod
Moonkit looked at the ground. She missed her mamma, and she missed her siblings. "My mamma was the best hunter in the forest..." She said, shuffling her paws.

"I'm sure she was. You can become even better by training with us." Dark said, "You will be sleeping here, with me. Don't worry, I have some I miss to. We can relate." Darkstar said this was Moondust yawned. "I'm going to the warriors den, bya." She said to both of them and left.

Mod
Moonkit looked at Darkstar. "Ok." She said, padding up to Darkstar. She touched her nose, to his, and looked into his eyes. "Thank you, Darkstar."

Dark purred, using his tail to pull Moonkit so she was put aganst his fur. "Anytime." He said, smiling warmly.

Mod
Moonkit smiled, happy to have someone to look after her. She slowly dozed off, and dreamed of her mother.

Unable to move, Darkstar sat there, pondering the little kit's future, that he would now call his daughter. Glad that he had left out StarClan and the dark Forest, he knew that Moonkit would find out one way or another, even when he joined StarClan, it would brake Moonkit's heart. Even more Moondust's, but he would get to see Lightninglight again, his son.

Mod
Moonkit pressed against Darkstar, her little paws moving. She dreamed of running from a fox, but it kept getting her. Every time it caught her she started over again.

Dark looked down at Moonkit, wondering what she was dreaming about. He lay down, keeping his head up and thinking.

Mod
Moonkit woke up from her nightmare and moved farther into his flank, her eyes wide open in fear. She whimpered, slowly falling back asleep.

Mod
((I'm back. Sorry, I was back at exactly 15 minutes, but my dad punished my sister and I for not responding fast enough. T.T Please. I'ma the fastest in my family))

Darkstar soon drifted of to sleep. When he awoke, it was still light outside, and he yawned. Lifting his head up he opened his glowing blue eyes.

Mod
Moonkit woke up and looked at Darkstar. It had been a while since she'd had a nice nap. She placed her head on her paws and looked out at the camp. This is one of the best days of my life...

((I'm working on a group that I'm putting all my time into, so I wont be able to respond. Would you like me to invite you to this group so you can see the progress?))

Dark soon got used to the brightness/darkness of his den and looked around once more to find Moonkit was awake. "Hello." He said, looking at her.

"It's still morning, so, if you want to explore the camp, you can. Or do you wan to stay in here for a little bit I'm getting the feeling not everyone likes you." He said.

Mod
"I want to explore!" She said, jumping up. Since she had come here she had been getting back to her usual self.

"Ok, Your aloud to go around camp, but not outside." He said, "Unless you wanted my to show you." Darkstar added, getting up. If not, he would be able to look around the forest for that fox.

Mod
"I think I'm going to stick in camp." She said, scrambling for the exit. She was excited to learn about her new home.

((And the question was "Do you want be to come with you?" Darkstar said that. Also, It would be better is Darkstar was her mentor, or you would be Rping on your own, unless Darkstar or some other cat was there.))

"So, do you want me to come with you?" He asked again, since Moonkit didnt get the question. Darkstar stood up, shaking his pelt. Remembering how tall he must look, he sat down.

Mod
"Um, if you want to." She said. She still was getting use to the size of all of the cats around here. I wonder if I'll ever be that tall...

"Ok, I'll stay outside my den, and I'll watch you, but won't follow you." He said, standing up.

Mod
"Ok." She said as she tumbled out into camp. I'm going to make this one of the best days of my life!