I just got started on this book and I'm only about 25 pages through. Its going to be hard for me to keep on reading it because the plot is not holding my interest. I'm going to try making a character list. I think part of my problem is that I keep mixing up the characters. Within the first 25 pages, there have already been six or more of them introduced and they are hard for me to keep straight. I don't think this is a big spoiler. It's just a short list and description of the introductory characters in case anyone else is having trouble remembering who is who.

I've started reading too and so far I can't tell if I will like any of the characters. I'm not surprised by the melancholic tone or the dynamics between the men and women, but it is not my favorite thing. I am happy to be reading a classic though and I'm enjoying the writing style!

I have read up to page 102. I find that there are certain descriptions in the book that are quite lovely. Mostly, the ones I like are that of nature. I have been looking up Japanese cultural references I don't know as I go along and that has been interesting for me. I go on the internet and find a picture of something described in the book such as a Shigariki vase.
http://www.japanesepottery.com/images... 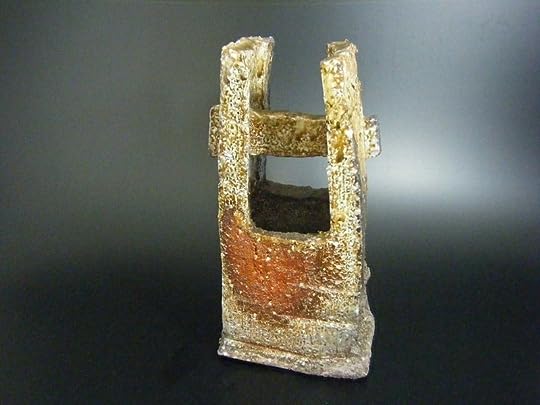 I also agree that the tone of the book is a bit meloncholic as you say June. It is sort of like a soap opera on T.V. There is not much drama, more character description

Here's a question: mild spoilers up to around 10%:


Are the dreams Shingo has supposed to be symbolic in the sense that we could do a close reading of why he remembers his friends' faces and not the woman's face or are we supposed to consider it somewhat mystifying in the way he himself does?

Are the inconsistencies in memory supposed to create the tone for the narrative or are they heavily meaningful in a literary sense? I'm thinking this may be more a question about Kawabata's style than the book in particular.

June wrote: "Here's a question: mild spoilers up to around 10%:


Are the dreams Shingo has supposed to be symbolic in the sense that we could do a close reading of why he remembers his friends' faces and not t..."

I think that the dreams are a reflection about how Shingo feels about his current life, his marriage and his aging. He and his wife are not close in a physical way. He begins to dream of holding a young girl and that he himself is young. Also, there is a part later where he feels like he wants to kiss a no Mask. I think he longs for physical affection.

As for the inconsistencies in memory, I think it is a manner of style as you said. I will think about that more as I read the book.

I think Shingo's dreams are to be seen as expression of his subconscious fears and desires. He is dealing with his role as family patriarch and his apparent loss of authority (and understanding) with his children. He also has conflicting emotions about his daughter-in-law, that go from paternal to sexual. And of course he's dealing with the approaching death, manifested to him with his decreasing memory and physical ability. I thought the dreams, so vivid and puzzling for Shingo, had the same purpose of the sound of the mountain he hears at the beginning. They're call from the deepest part of his human nature, but also from death.

I am also interested in the description of the No masks (also spelled Noh masks.) It seems that there are different types. I looked up pictures of them on google. I think the one described in the book looks like this picture below. Notice how when the mask tilts down, it looks like it is smiling! It also has the ginko shaped bangs as described in the book. It seemed that Shingo was attracted to the mask. It is the Noh mask Kasshiki. I write these things down as I read and look them up later. The website says the mask was used for the roles of young lay priests. It does look like a woman to me though. In this story, there is some question about whether it is a man or a woman. I find these masks interesting. I noticed in this mask that the teeth are black. I looked this up on Wikipedia. This practice was called Ohaguro. It was mostly done by married women but sometimes men did it. It helped seal the teeth from disease and tooth decay. There is lots more information to be found about these masks. 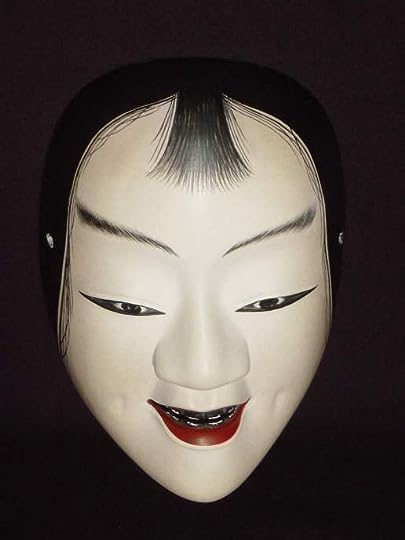 Giuliana wrote: "I think Shingo's dreams are to be seen as expression of his subconscious fears and desires. He is dealing with his role as family patriarch and his apparent loss of authority (and understanding) wi..."

In this part of the story, I am a little confused. I think what happened is that Kikuko pretended to get a letter from a friend who had an abortion. When she was going to the hospital to visit her friend, she was actually getting an abortion herself.

Even though the plot at this point in the story is very sad, I find some of the interactions between the family members to be very endearing. By now, it seems clear to me that even though Shingo and Yasuko are not very attracted to each other physically, they are good companions for each other. That exchange that they had about cutting their hair and making it into whips was really cute and funny. The way they banter with each other like that is really sweet to me. Also, I like how loving the relationship between Kikuko and Shingo is so loving and caring. The imagery of the two of them in the park was beautiful. It shows that even in the worst of time, you can still refresh yourself with beauty. I could imagine the place in my mind.

The way it looks to me now is that its a very sad story with beauty surrounding it.

This section of the book from to 193 to 252 are disturbing to be because they deal with the issue of abortion. That is a very sensitive topic for me. I have always had very strong beliefs against abortion but the way it is addressed in the book makes me reconsider them. Shingo's character forces us to consider the issue from both sides. The way he is tortured about it really makes me pay attention. In the situation with his daughter in law, Kikuko, he knows he has lost a grandchild which he wanted very badly. He also knows that it was his son's fault for making Kikuko feel bad about herself. He wishes that Kikuko had the baby.

At the same time, Shuichi's mistress, Kinu is pregnant and Shingo doesn't want her to have the child. Even though she says it is not Shuichi's child, he knows that she is most likely lying. He struggles over this because even though he knows the baby could very well be his grandson, he doesn't want Kinu to birth it.

I think there is probably a Japanese cultural aspect to Shino's thoughts about the two pregnancies. I expect he doesn't want Kinu's child to bring shame to his family. Perhaps he is considering that Shuichi would be obligated to financially support it.

I think there are some cultural undertones that I have missed.

On a lighter note, I looked up Shinjuku Garden which is mentioned in the text several times. It looks beautiful. If I go to Japan one day, I want to see it and others like it!

In talking with our Japanese exchange student who lived with us for 3 years, I got the idea that abortion was a more practical decision. She believed that the parents have a huge obligation to give a living child every opportunity to succeed, which is a big financial commitment. She thought insuring that the child had a good life was more important than the destruction of cells. I don't know how general her ideas were in the late 80's and early 90's. She got pregnant, the father agreed to marry her, and the child was born. I don't know if she would have had the child alone or whether her parents would have supported a fatherless child. My guess is that she would have had an abortion in all circumstances other than the one that resulted in a traditional family. I got the idea abortion was a practical rather than moral decision.

Interesting that Shingo prides himself on his sensitivity to the new growth on the gingko tree. When Kikuko mentions it he says, "You've only just noticed?...I've been watching it for some time now....Shingo was troubled: that she had not noticed unseasonal buds on the great tree suggested a certain emptiness." He deems his sensitivity superior to hers, but what has she noticed that he did not? She does not point out something she has observed, but agrees to notice everything he does and imitate it. Deference to elders and imitation seem to have strong cultural basis. Is sensitivity to nature still an aesthetic or something unique to older generations?

I just finished it, and I have to say, I liked it more than I thought I would when I first began..,
Some thoughts about the ending...
**spoilers**
During most of the novel, I was wondering about Shuichi's wartime experiences, and if some of his irrational and destructive tendencies could be chalked up to PTSD. I hadn't realized at first that the book was published in Japan as early as 1949, so Shuichi's wartime experiences would have been very fresh.
I was sort of frustrated with Shingo's unwillingness to try to reach out to his own children, though I could also see how both Shuichi and Fusako were offputting in different ways. It was kind of amusing that down to the final page of the novel both of the older folks are still showing their preference to Kikuko ("Let's walk to our other house among the maple trees tomorrow! And take Kikuko! AND NO ONE ELSE.") But I liked that Shingo also finally encourages Kikuko to have some independence and identity outside of her care for her husband and his parents, and I saw her decision to help Fusako in a shop as a sign that she had taken this to heart.