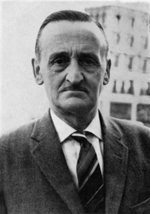 Inspired by Mark's fulsome review of It Always Rains on Sunday, here's our very own Arthur La Bern discussion thread

And, of course, the new introduction by Cathi Unsworth adds value to the cost of admission. Fingers tightly crossed for London Classics to bring more La Bern back into print, because I'm left with this nagging urge to read absolutely everything he's ever written.

"Set over a single day in 1939, It Always Rains On Sunday captures the East End of London shortly before the start of the Second World War. The book is centred around the residents of Coronet Grove, its focus the Sandigate family. People go about their lives, heading to the local church and pub, while those looking for excitement are drawn to the bright lights of Whitechapel. Rose – a former barmaid in The Two Compasses – is married to George Sandigate, twenty years her senior, the thrill of her time with villain Tommy Swann firmly in the past. Church bells ring as small-time crooks plot in the pub, a newspaper headline telling Rose that Swann has escaped from Dartmoor.

It Always Rains On Sunday is the atmospheric debut novel of Arthur La Bern and features a large, colourful cast of characters. Dreams and reality clash as arguments rage, gangsters lurk, madness simmers, violence is threatened. Sex and death hang heavy in the air. Described as a predecessor to Alan Sillitoe’s Saturday Night And Sunday Morning, the film adaptation was a great success and It Always Rains On Sunday remains a classic of British cinema. The book and its author were likewise lauded, and La Bern would go on to write a series of largely London-based, working-class gems.""

Arthur La Bern (1909-1990) was born in Islington, North London, the son of Lionel and Lizzy Labern, formerly Charlotte Colombo. Lionel was from Holborn, Lizzy from Clerkenwell, a third-generation Londoner of Italian descent. The Colombo family were doll-makers in an area made infamous by the Sabini gang, while Islington was another area known for its criminal element. It is not hard to see where Arthur found the raw material for some of his future work.

Lionel died in 1910, followed by his eldest son two years later. Tragedy had engulfed the Labern family and life became very hard. La Bern left school at the age of thirteen or fourteen, and while ‘terribly poor’ is remembered as being smartly-dressed and a ‘bit of a spiv’, a Jack The Lad character who was humorous, enjoyed a drink and was popular with the ladies. He moved about, sleeping here and there, but always returned to his family and an old typewriter.

It Always Rains on Sunday (1945) was his first novel. By then he had changed his name from Labern to La Bern and was claiming Huguenot ancestry, but there is no evidence to support the claim. In reality, he wanted to sound ‘posh’, believing it would give him a better chance of succeeding as a writer. The book itself was authentic and well received, and soon turned into a high-profile film.

More novels followed, with Night Darkens the Streets, Paper Orchid and Goodbye Piccadilly, Farewell Leicester Square also adapted for the screen. The last of these was directed by Alfred Hitchcock and renamed Frenzy, but La Bern was unimpressed with the result.

Other titles include Pennygreen Street, It Was Christmas Every Day, The Big Money-Box, Brighton Belle, It Will Be Warmer When It Snows, Hallelujah and Nightmare.

Arthur La Bern also worked as a crime reporter for the Evening Standard, the Daily Mirror and the Daily Mail, and during the Second World War was a correspondent for the Evening Standard in the Far East. Two non-fiction works – The Life And Death Of A Ladykiller and Haig: The Mind Of A Murderer – focus on a couple of notorious serial killers, their treatment of women at odds with the strong female characters at the heart of novels such as It Always Rains On Sunday and Brighton Belle, perhaps in turn mirroring his childhood experience of being raised by a single mother.

The success of It Always Rains On Sunday catapulted Arthur La Bern into another world. He lived the highlife, but could not control money, and in his later years fell on hard times again, at one point sleeping rough on Brighton beach. Even so, his story is one of great success, the best testimony coming from his nephew, Peter Wickins, who remembers a man who was impossible to dislike.

...it has been fast tracked to the top of the TBR pile. I'll be starting it tonight.

Mod
Loving It Always Rains On a Sunday. Thanks Mark.

Mod
^ This is superb. Right up there with London Belongs To Me. Really.

Really pleased to hear that you dug the novel, though hardly surprised. It truly ranks alongside Hamilton and London Belongs To Me as one of the best, at least from my own perspective. Evocative and engaging, it left me incredibly hungry for more. Fortunately, it looks like London Classics have La Bern's Night Darkens The Streets lined up for a return to print, potentially with a new introduction written by Max Decharne. Only trouble is, it won't roll out soon enough for my liking.

Have you seen the filmed adaptation of It Always Rains On Sunday? I haven't, and I'll cop to not being in any sort of rush to see it, mainly because I can't imagine it coming within miles of matching the novel in the quality stakes.

Mod
Back at my computer tomorrow so expect more fulsome comments then.

I believe Ealing made the film which generally augers well. I've also heard good things about it. Doesn't seem to be available on DVD in English though there's some clips on YouTube.

Mod
"It Always Rains on Sunday" by Arthur La Bern...

It’s wonderfully written, exciting, compelling and awash with atmospheric period and location detail, in short if you have any interest in London writing, or the 1930s, then this book is another essential read. Right up there with London Belongs to Me, Hangover Square, The Angel and the Cuckoo, and The Gilt Kid.

Looking forward to more by ALB

Mod
Thanks to Hamiltonian, and all round good guy CQM, I am now immersed in another ALB novel...

I'm about 50 pages in and it's a somewhat sensationalist, lurid reimagining of Brighton Rock complete with violent crime, brassy pub landlady, muck raking tabloid reporter, bookies, horse racing, self made man with his teenage daughter at famous local posh school Roedean - she has fallen for a pop star.

It's a rip roaring read so far 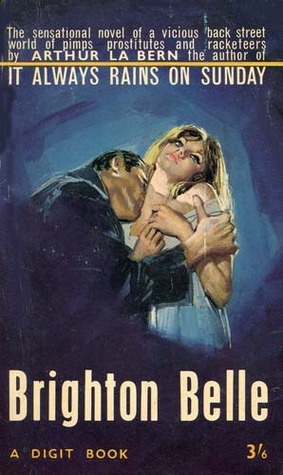 Glad to hear you're enjoying it. I felt the same way, if you read the setting and cast of characters you'd definitely think it was Brighton Rock.
Not an absolute masterpiece and you might get left hanging with some of the threads but if you enjoy the pub/crime milieu and the faded seaside glamour then this one has it in sensationalist spades!


"...if you enjoy the pub/crime milieu and the faded seaside glamour then this one has it in sensationalist spades"

That's it in a nutshell

Thanks again CQM. You're a legend

I know that London Books has this one in the pipeline for re-publication, and the aim is for it to be published this year. There was chat about Max Décharné writing a new introduction, but I’m not sure if that still holds. Either way, I’m very much looking forward to it.

Mod
Thanks Mark. I'd be interested in Max's introduction and, whilst no It Always Rains on Sunday, it's very entertaining


"Thanks to Hamiltonian, and all round good guy CQM, I am now immersed in another ALB novel...

I blimmin loved it

Mod
The film version of It Always Rains on Sunday is on Talking Pictures TV on Thursday 28 Jan 2021 at 6:35 pm

Thanks for the heads-up on the film. It’s now booked on your recommendation.

On Sunday 24 January, Sony Movies Classic (channel 51, UK Freeview) is showing 84 Charing Cross Road. The Helene Hanff book on which it’s based seems not to have featured in any of our discussions, and in its reviews I see no familiar names from our well-informed collective.

It, and especially its follow-up The Duchess of Bloomsbury Street, both get give stars from me, and if I can get a CD/book review list ticked off before deadline, I’ll try to put my thoughts into writing. Even if she writes from NYC, Ms Hanff has an addiction to high-quality British publications, and her narrative to her eventual visit to London in her second volume is a delight without resorting to sentimentality. The London books thread is probably the best destination for this if and when time allows. Apologies for the deviation from the original subject.


I remember when the film came out it got favourable reviews. I don't think I knew it was based on a book, although that makes perfect sense

I'd be very interested to read any thoughts you have, if you have time to compose a post

Mark wrote: "I know that London Books has this one in the pipeline for re-publication, and the aim is for it to be published this year. There was chat about Max Décharné writing a new introduction, but I’m not ..."

I've just finished Pennygreen Street and It's a corker. Brighton Belle was a lot of fun but for me, Pennygreen Street is the one to republish. A crying shame that only 2 people on Goodreads have read it. Mind you 2 people with impeccable taste.


I saw your review of Pennygreen Street and immediately went searching for it.

About £20 for a copy including postage and I could only find on across eBay, Abe and Amazon.

Do you have any other sources for your out of print books?


I saw your review of Pennygreen Street and immediately went searching for it.

About £20 for a copy including postage and I could only find on across eBay, Abe and Ama..."

Sorry Nige, those are my usual stops for out of print books too. I generally have a saved search or book "want" that lets me know if anything becomes available. Not quite as pleasurable as perusing dusty bookshelves for hours on end but probably more efficient.
Pennygreen Street is a keeper for me but I'm more than happy to lend it to you via your friendly neighbourhood postie?

Mod
Thanks CQM. That's a very kind offer however I'll gratefully decline. I'll get hold of a copy at some point and, given your glowing review, I eagerly anticipate that day.

Fair enough. I confidently predict joy when you do!

Very glad to hear that you and Pennygreen Street got along famously. Good to know that you rate it above Brighton Belle, which saves me from throwing money away before its eventual London Books edition.

Brighton Belle is a cracking read and a lot of fun but Pennygreen Street is definitely a cut above.

Mod
I can vouch for the pleasures to be found in Brighton Belle. ALB certainly used his local knowledge to cram in all manner of locations around the city