I'm pretty much up for anything.

Nice so we like a few of the same things.

can you explain more?

I guess I'm just having a little trouble understanding.

Nothing we can just start.

It doesn't matter to me either one works.

Okay then. That works for me.

Okay so what's the outline for the characters?

Okay that works for me. How older were you thinking about making your character?

Name: River Lynn Chamlers
Age: 19
Gender: Female
Personality: She's a sweet down-to-earth kind of girl. She doesn't like to cause harm to others and she really doesn't like to fight in fact she hates violence but when it comes down to it she'll do it. She's a romantic kind of girl and is pretty fun to be around, she can be funny yet sarcastic so don't piss her off. She's pretty smart and sly she is loving and very loveable in all honesty she seems pretty innocent.
Other: She doesn't like talking about her pass so if she does take it as a sign that she trust you.
Appearance: 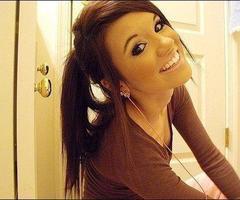 yeah sure that would help.

River had never seen the outside world and to be honest she was okay with that. She heard scary stories about the world outside and she was scared of it. If the day ever came where the vault would be opened she just hoped she wasn't alive when that option came upon them. River was sitting in one spot already, her stomach was basically growling at her to eat something already but she couldn't until their leader said a few words or something along those lines she never listened.

River listened to what their leader had to say, they had one more year. Well she guessed that she had one more year to get her act together and push all of the stories she heard to the back of her mind. She couldn't be afraid anymore, never afraid, animals smelt fear. River soon saw Judd, she had seen him around before and had said hi a few times but she didn't really know him know him. Maybe she would try to become friends with him after dinner or something, she didn't know if that was a great idea but it was worth a try. She soon started to eat her food and try not to make eye contact with anyone else as she ate.

((Sorry but today was my one month with my boyfriend.))

River saw him leave so she threw away the rest of her food, she then followed him to the loft room. When she saw him just sitting there she wasn't sure if she should go in and say hi or what. Hopefully in instincts would just take over and tell her what to do. She takes a deep breath and walks in. She saw him on the couch and walked over to the general area. She sat down on the chair that was in there as well.
"Hello!"

"Someone to talk to. I don't have any family here except my brother. He's off in another land you know la la land. I'm River, what's your name?"
She asked him she hoped that this wasn't coming off as weird or anything else like that. She just really wanted a friend and would do anything to have a friend. However she wasn't really sure if he even really wanted a friend and yet she didn't want to find out so she thought maybe she should just leave him be.
"I'm sorry. "

((sorry for the late reply haha))

"How do you know that I wouldn't be talking to you if I knew who you were to begin with. To the wateland huh? I hear a lot of people wanted to go there including my brother. . . why though? why would you want to leave the vault to go up there, I don't think I would want to I mean I'm perfectly fine and alive down here but up there I don't know if I would die just from the very first breath I take."
That was basically her only fear about going up there and seeing the world for what it was, if that fear could be put to rest then yeah for sure she would go up there and explore, she didn't like listening to the adults down there and not having anything to do most of the time.

River sighed as she looked at him, she didn't know what to say, she couldn't live here anymore because there were times when she has actually threaten the person she was irritated with. She's even gotten into trouble for harming someone before. She knew she had to get out of there before she did kill someone.
"I'm not saying I don't want to see our world and explore the land that was once beautiful before the war, I'm afraid of dying if we were to open..... you really want to go I'll take you. I realize maybe it's better to try then stay here and be afraid all my life it's getting too crowded anyway. Plus do you believe in your hunches like are they always right?"

"Look you want to get out of her, I'll help you get out of her but on two conditions one it's just you and me no one else gets to come. The less people we bring the less likely we are to get caught. Two I get to come obviously."
She said looking at him, she wanted to get away from the vault only because she did feel trapped. She did want to explore the world she wanted to explore this mother nature as well.

River looked away from him she didn't really want to answer him but she guessed that she would have to. She sighed and gave a small nod, he obviously wouldn't let her come unless she told him.
"My father was only twenty when he went out into the world to see if it was still safe. I was maybe only one at the time. He told my mother he would come back for her some day but he never did. As the years pass she lost more and more hope of him ever returning maybe he died out there. I guess that's where my fear came from, however my mother got really ill, you remember the plague that hit here or you should. I was six. Then it was just my brother and I, he vowed he would be the first one to go out when the time came, he wanted to get an early start to see if he could find our father. If he was still alive. However I don't wish to go with him he still treats me like a child and he told me I would stay here or in a shelter with the others who didn't want to go right away. I want to go because if I don't the next time I get irritated I might just kill the guy, not hurt the person but kill them. I've already gotten two strikes I can't get another one. Plus my brother is better off without me..... everyone is."
She told him all of this without looking at him, she figured if she could get out with him then she could leave and go her own way leaving him alone.
"If you get out with me then I'll leave and you can do your own thing you won't have to worry about another person."

River gave a small nod, alright they would do things on his terms they would do it his way. Though she thought she deserve to have a voice in the whole matter like how in the world did he know there was going to be a riot. Was he being nice to her? most people weren't nice most people would be afraid of her because she actually had the guts to kill someone before.
"Wait what riot? and you aren't afraid of me?"
She asked him as she looked at him, when she blinked her tears just didn't seem to be there yeah maybe one or two left and found a way to roll down her face.