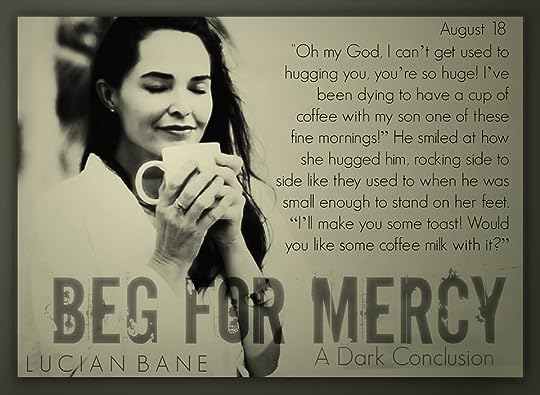 ☆ ¸.•*´¨) ¸.•*¨)Beg For Mercy~ A Dark Conclusion
(¸.•´ (¸.•` Coming 8/18 ☆ TBR >>>http://goo.gl/1MLxm5
Sade made his way quietly downstairs, hoping to make it to the coffee pot and out the door without getting caught. He needed to breathe air not saturated with Mercy. Needed to think about what was happening with her and him. Mostly him. He didn’t remember ever feeling like he did now, the things he was dealing with were new. At least his old shit was familiar but this… this was different and he needed to figure what and why before he did something he’d eternally regret. As it was, he skirted disaster no matter which way he turned. He was in quicksand and any more he made sucked him a little bit further under. And when she was near him, his mind stepped into a blender set to puree. A look, a kiss, a smell from her—it all ate away the cement holding his mosaic life together, the broken pieces that had been glued together into a halfway usable something by which he existed if you could call it that. He knew one thing. She didn’t deserve this. Him and his sickness.
Entering the kitchen, he nearly sighed in relief until his mother spun from the far end. “Gooood morning my precious baby,” she gasped, hurrying over with both arms open and a bright smile on her face.
“Hey mom,” he said, embracing her.
"Oh my God, I can’t get used to hugging you, you’re so huge! I’ve been dying to have a cup of coffee with my son one of these fine mornings!” He smiled at how she hugged him, rocking side to side like they used to when he was small enough to stand on her feet. “I’ll make you some toast! Would you like me to make you some coffee milk with it?”
The sheer hopefulness in her tone took care of that answer. “That would be great.”
“Awwww, thank you for indulging me, baby.” She reached up and stroked a thumb along his cheek and ruffled his hair before spinning to the counter. “But if you want regular coffee, I won’t be offended you know. How do you take your coffee normally?”
He grinned, glancing all around. “I take it black.” She gasped and looked over her shoulder. “Black! Of course you do, you’re such a strong man!” she bragged, making him grin and shake his head.
“Don’t tell me you’re shy!”
“Nah, just not used to all this attention.” More like not used to having a mom caring. Or just having a mom.
She sucked in a breath, putting bread in the toaster. “I don’t know, that Mercy of ours seems to show you plenty, hmmm?”
He gave a light shrug and pulled the island bar stool out and straddled it, the mention of that making him feel like shit. “Yeah.”
His mom suddenly stood across from him, forearms on the counter, leaning toward him with a inquisitive look. “What’s wrong with you?” she asked quietly, her tone soft.
He shook his head, not meeting her all-knowing gaze.
“Don’t bullshit me, young man,” she whispered firmer. “I may have missed a lot of years with you but I know when you’re fibbing. Now, talk to me,” she finished with a soft beg, “you know you can, look at me. Look at me.” Sade looked at her, hating how hard that was. It was close to looking in a mirror for him. “Who are you looking at?” she continued, opening both arms with a beautiful smile. “I’m your mother,” she hissed, sounding thrilled and amazed. “Now, come on. Fess up. Talk to me.”
Sade regarded her secretive look and took a deep breath before glancing around for an escape.
The toaster popped and she went in reverse, pointing at him it. “Organize your thoughts while I get your toast. Then we’ll take this outside, the morning is gorgeous!” she squealed, hurrying to the fridge, sky blue silk robe flowing behind her. “Don’t tell,” she whispered, mischief in her voice, “but I’m up to surprise Kane with breakfast in bed.”
“Aw mom, don’t let me stop you.”
“Shut uuuup!” she cried, tossing him an incredulous gaze while loading a wooden tray with their morning goodies. She picked it up and headed toward the door. “Now come on, follow meeeee,” she sang, kicking open the screen door and hurrying through it.
Sade ran and caught it before it could slam and wake up the house. But what did it matter? Having a heart to heart with his mom about this shit was the last thing he wanted. Ever.
Add to your TBR here >>>http://goo.gl/1MLxm5
If you haven't read the first two yet you can find them here:
‪#‎BestSeller‬ ‪#‎DarkErotica‬ ‪#‎FreeOnKU‬
☆Mercy: A Dark Erotica☆ *SALE ‪#‎99Pennies‬**
Amazon Links: #FreeOnKU
US: http://amzn.to/1OM1KEu
UK- http://amzn.to/1yn2SWK
AU- http://bit.ly/1FWJY0L
CA- http://amzn.to/1xnmbE0
☆No Mercy: A Dark Coninuation☆
Amazon Links: #FreeOnKU
US- http://amzn.to/1Kkd0WO
UK- amzn.to/1HIy8bC
AU- bit.ly/1LFLFzt
Would you like to join my Dark Erotica Group and help with the creative process? You can join here>>http://on.fb.me/1PN8NBD
Do you plan to purchase and review Beg For Mercy? If so this may be of interest to you >>>http://bit.ly/1eBTCdr
Would you like to sign up for the Beg For Mercy Blog Tour? You can do that here>>>http://bit.ly/1Ij9WKL

I love this snippet!! Sade & his mom LOVE! 12 Days and I will find out the rest LOL! I can hardly wait!

Love this snippet! Funny b cause big strong tough Sade is afraid to talk to his mom about his woman!

This is the longest 11 days of my life!

Almost time and I'm so ready!

These snippets are barely getting me by....anxiously waiting!!

Holy Smokes!!!! Where did she come from? Why has she been GONE from Sade's life for all this time? What did I miss?

Counting down the days!!

It's the Final Countdown!!!

Love the snippet & teaser, Sade needed some time with his mom and they have a lot that they need to discuss. I can't wait to see how all this plays out.

Love the dialog between Sade and his mother

Great scene between Sade and him mom.

I did not see this coming! wow Now I need the book sooner!
WriteLucianWrite