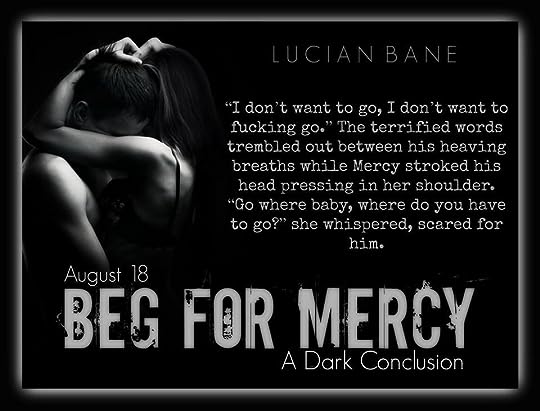 Survival instincts engaged and she slithered right out of his hold and ran for the balcony doors, his feet pounding behind her. She was in flight mode and couldn’t even scream as she fought with the lock. Her head snapped back, his fingers biting in her hair as he held her to his body, one arm locked around her neck, the other across her front.
She shot a hand behind her and grabbed his balls and squeezed. He growled in her ear, the arm at her neck, choking her.
“Fucking do it,” he barely managed, agony and pleasure in the shaky words.
Darkness slowly swam in her mind as he increased the pressure, maybe not even realizing he was. Kill and maim maneuvers rapidly flashed in her mind. She fought each one, refusing to lose hope in him. He’d catch himself. He’d… catch his… head. “I… love you.” The words barely made it out as she slowly released and went limp. He suddenly shoved her away from him and she hit the floor in a sprawl.
“What the fuck are you doing, Mercy?” he gasped, sounding confused.
She turned on the floor, coughing again, struggling to get enough air. “You’re not an animal,” she sputtered. “That’s not… who you are, Sade. You have to fight this.” He froze and just stared at her until she got nervous again. “You can fight it,” she pleaded, sitting up.
He gasped several times then hurried to the far side of the room, and paced. “I fucking want to do things Mercy. I want your pleasure, but God, I want your fucking pain,” he seethed, sounding as terrified as he was hungry. “I don’t want to be this person, I fucking don’t!” he roared at her.
Mercy climbed to her feet and made her way to him, carefully.
“Get away from me.” He put his hands up and stepped back. “I can’t touch you right now, I can’t.”
“I’m not leaving, I won’t. You’re going to stop,” she whispered calmly. “You’re going to sit on that bed, right fucking now, Sade. And you’re going to calm. The fuck. Down.”
He stared at her, appearing bewildered. Like a scared little boy that was being made to do things he dreaded. And yet craved.
Sensing a break in the fiery wall around his mind, she pointed to the bed and ordered the trembling command, “Sit. Down.” When he continued to only stare at her, seeming unable, she whispered, “You won’t win the fight with me, Sade. You’ll have to kill me. I won’t give in to your devils, do you hear me?” Tears filled her eyes and she gasped, “I… will fucking never give in to your devils, so you had better… sit down.”
His body was suddenly heaving as his head shook and his face contorted with brutal emotions, none she could name. It was all like a dream, she was standing there watching him one moment, then he was on her the next, his mouth crushing hers, hand pulling brutally in her hair. Mercy grasped his shoulders to keep from falling when a sob tore out of him. He cupped her face now in a trembling carefulness, kissing as though salvation could be found in the worship of her mouth and tongue. “Fucking help me!” he gasped. “Please!” The desperate word wrenched from deep inside him, a lost man, horribly desperate to be free. “Don’t leave me, please don’t give up, I need you.”
Mercy gasped when he enveloped her in a full body embrace. “I’m here,” she sobbed back, “I’m not leaving, I’m not leaving you.”
“I don’t fucking want to go, I don’t want to go.” The terrified words trembled out between heaving breaths.
She managed to stroke his head pressing in her shoulder. “Go where baby, where do you have to go?” she whispered, scared for him.
“To that fucking place,” he choked. “That place, Mercy.
“You don’t have to go, you don’t have to. I’m here, I’m here.”
“I don’t want to go there, Mercy,” he gasped again. “I hate that place, I hate it so fucking bad.”
“Then you’ll never go again, that’s all there is to it,” she cried hotly in his ear. “You’ll never ever have to go again baby, I won’t let you. I’m here, I have you. do you understand me? You’re not going back there. You and me, we’re walking the fuck out of there.”
She gripped him hard and a deep sob tore from him like he fought a thousand more ten times worse. “I don’t want to go,” he demanded before whispering over and over, “I don’t want to go, I don’t want to fucking go, I don’t want to hurt you, please don’t let me.

These teasers are amazing... Less than 2 weeks left and I can't wait for the release!

Holy crap! These teasers are going to be the death of me! I love Sade so much! I can't wait to see what happens!

The writing just draws you in and keeps you wanting so much more!!!!

This snippet kills me! My heart goes out to Sade! Lucian wrote this so you can actually FEEL the pain that Sade has. I can't wait to see how he faces these demons and what Mercy does to help him face them.

Ahhh...I slipped!!! I read part of it! Im afraid im way too addicted to control those urges to read!!

I am so deeply invested in this story...my emotions are on overtime when I read these snippets...I can't wait to read this book!

The writing is evocative of so many emotions, stirring up so many more questions than answered about these two characters, their pasts, their present, and their united future. How they will ease one another as they go forward is an incredible unknown and only the talented paintbrush of the author can lead us there.

Wow, so emotional!I can hardy wait for the next book in the series, Beg for Mercy.

Can't wait this series is the bomb!!!

Cannot wait for this book! My anxiety is up just waiting because I know its going to be gut wrenching!

The teasers are keeping me going until the 18th, but I'm beginning to get withdrawal symptoms. I need more of Sade and Mercy.

I know the snippets are just covering at most one chapter. What the hell else is happening in this book? Can tomorrow be the 18th?

The daily snippets have been amazing! They bring back memories from the other 2 books and I am getting so pumped up to get my hands on this book! Only 12 MORE DAYS!!!

I love this damn snippet & teasers. The 18th can't come fast enough for this book.