Hello so do you have any ideas

reply | flag *
message 3: by [deleted user] (new)
Aug 05, 2015 11:19PM
I was thinking two best friends fall in love with each other as they begin to date people and they start to notice each other a little more?

Mmkay I love that idea

okay can you go first 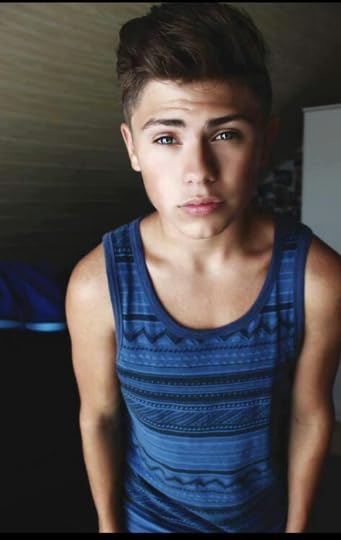 
Isaac woke up and realized that he was late for school. He sighed has he got out his bed. He got dressed and grabbed has his backpack has he left his room and throw it over his shoulder. He went down stairs to the kitchen and quickly made a sandwich. He heard his father come down the stairs and he know he would hear a hand full. "Why are you still here." Said the voice coming down the stairs. Isaac sighed not really in the mood to listen to his father complain. So he shrugged his shoulders and walked to the door. "We will talk about this later, Isaac." His father said not glancing or at his son. Isaac smirked walked out the house. He started walking down the street, when thought his friend Mason. He pulled out his phone and deicide to text him. "What sup you at school yet?"

reply | flag *
message 13: by [deleted user] (new)
Aug 06, 2015 12:44AM
Mason was asleep, when his alarm clock blared the morning news, Mason scrambled out of bed but instead of a neat wake up, he ended up on the floor with the blankets all over him. He had an little struggle trying to get out, his olde brother passed the room and he walked in to help, Mason grabbed his phone as soon as he heard the text ding, he looked at the text, 'Nope, I'm still at home, what about you?' Mason texted back, he thanked his brother before getting complete up.

"Nah just got out the house I'm walking down the street." Isaac texted back. He put in his earphone and the volume on blasted. He took a bite out the sandwich and keeping walking.

Isaac had finished his sandwich when he checked his phone. He saw the text from Mason, he looked up at the sky that was turning from dark purple into a light blue. He sighed before he looked down back at his phone. 'When I get to your house do you want me to wait.' Isaac texted, not looking where he was going he bumped into someone. He looked up and saw Dwayne who he know from school. "Sorry." he said. Dwayne said nothing just nodded.

reply | flag *
message 19: by [deleted user] (new)
Aug 06, 2015 01:44PM
Mason had started the shower, he grabbed his phone when he heard the text ding, he looked at the message, ' nah, I'll probably be outside or eating breakfast when you get here, so just come in when you get here' Mason texted back before he got undressed.

Isaac walked passed Dwayne without looking back at him. He kind of cute, he thought has he bit his lip softly. He always thought he was but he never told him or any boy that he thought they was cute for that matter. Isaac keeping walking and listening to music.

reply | flag *
message 21: by [deleted user] (new)
Aug 06, 2015 02:37PM
Mason took a shower, then after ten minutes he got out and got dressed, he then grabbed his phone and book bag and he headed down stairs. He passed his dad's room and his brothers room, he wished he hadn't stuck his head into his brothers room. He groans as he stumbled down stairs, his dad was coming up the stairs, he caught his son as he almost fell. " Woah May, slow down, haven't I told you to stop sticking your head into your brothers room? Just go down and eat breakfast, oh and you friend Keith is down there, eating our food once again," Masons dad says, Mason smiled and he nodded, he walked downstairs. The stairs led into the kitchen/dining room, so when he reached the bottom he said hello to his friend and he said hello to his stepdad and other older brother. He always thought Keith was cute, but has never told him because he was always too shy.