“I haven’t even started,” he whispered, coming closer.
Mercy walked in reverse until the bed hit her legs.
“You want to fight?” he asked. “You want me to make you, is that it?” His tone had gone too controlled, his steps too sure as he gave a slow one sided smile. “You like being made. Deep down, you like me to fucking make you take whatever I fucking give you.”
Her privates tingled with the truth of his words but her heart hammered with fear at hearing the monster from his past force him to its will as he gradually advanced. She held a hand toward him as she climbed on the bed. “I like you… in control of you.” When he got in lunging distance, she made her way off the other side. Her chest ached to know that at one time when he was a young boy, he’d felt the same terror she did now. She knew that terror. But all the monsters in her life had been strangers. What was it like to have somebody who was supposed to love you, become your worst nightmare?
The sadistic look on his face said her words hadn’t touched the sane part of him. “I like me in control too. Of you. You taking my cock however I want to give it, whenever, why-ever, for whatever.” He held both arms at his sides. “Right in this second, I want the head of my cock hitting the back of your throat, your teeth tearing at me,” he grit. “Then I want it buried in that tight. Fucking. Ass.”
His words continued to create a tug-of-war between desire and fear. She darted a gaze to the right, seeking a clear route of escape. God, she wanted him. But not while he was being played by that animal he hated. “You can have all that,” she whispered. “But not like this, I won’t let you.”
“You won’t let me?” He stepped up on the bed now, his chest heaving. “You really think you have a choice, Baby?”
The bedroom door leading out, pulled on every muscle. Run. Now. “I always have a choice, and so do you.”
“I do yes. I choose to take it. It’s not like it isn’t mine to take. It’s not like you don’t belong—to me.” He slammed his hands on his chest, taking another step, making the bed creak loudly under his weight.
“Let’s talk about it,” she gasped, fighting for casual while working her way to safety.
“Talk…” He stepped one foot off the bed and stared at her. “About what?”
“About us. How I can help you.”
He stood poised there, one foot on the bed, gaze burning down her body. “I don’t think you can handle that while I fuck you.” His eyes rolled back up to hers and locked hard. “Soul meshing? When my cock is driving into your ass?”
Oh Jesus. The thought of having his angry dick in her ass wasn’t something she’d let him do. Not quickly. But the sadistic tilt of his lips said he was two seconds away from losing any form of control she needed him to have in the matter.
Self-defense measures began presenting themselves as she kept her reverse steps undetectable. She could scream. The fear of her father getting involved should wake his ass up. She could fight him too but there was no telling how that might end. God, she needed some distance between them. A lot.
He stepped off the bed suddenly, and terror sent her racing for the exit out of the nightmare. She jerked on the knob and his growl came with his naked body slamming into hers, shoving her into the door. 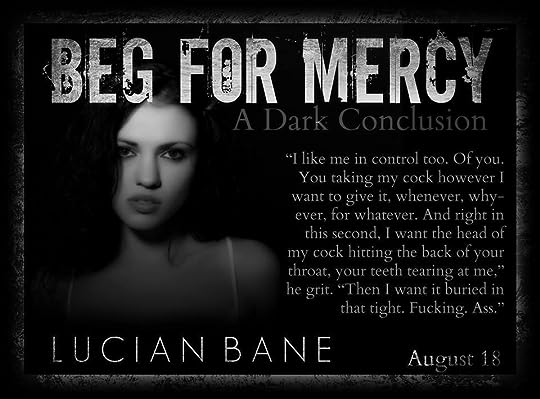 If you haven't read the first two yet you can find them here:
‪#‎BestSeller‬ ‪#‎DarkErotica‬ ‪#‎FreeOnKU‬

I feel like I am in school waiting for the bell to ring!!! Time is moving so slow, waiting for Beg For Mercy!!

Mercy so loves the excitement it arouses her but she's not stupid she knows how dangerous Sades' monster can be.

I can't wait to see these two fight thru their emotion! Come on August 18!

I feel so bad for Sade and I can't wait to see how these demons are conquered. He can do it with Mercy by his side! Come on August 18!!!

The daily teasers are my happy place LOL. They take just enough of the edge off of the anticipation but keep me hanging on and searching my email for the next dose! Only 13 days...only 13 days...

Sade took a great fall. I hope Mercy can put him back together again! It's a tall order...wow

I am so anxious and extremely excited for this book! The wait is killing me!

Again, I struggled to avoid peaking at this teaser! It is getting difficult. Im not sure how much longer I can take it!

I love how I can already feel the emotions in these snippets and know that the emotions will be even stronger in the book.

Ruby wrote: "Again, I struggled to avoid peaking at this teaser! It is getting difficult. Im not sure how much longer I can take it!"

Me too! I need the whole story though so I force myself not to look.