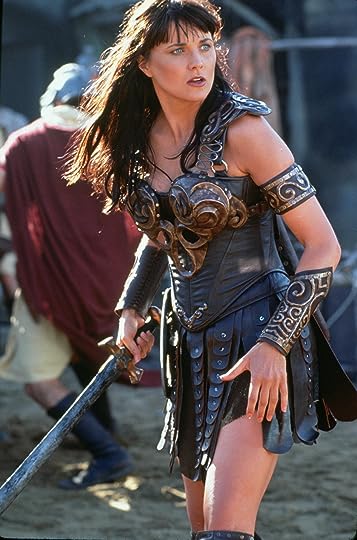 - Once all columns of a goal have been filled out a new goal will appear within 5 minutes.

- Do not change existing pages. You may add a new page to your spreadsheet if you want to track additional information.

- Mark books as used in your books list once they are used for a goal.

- Only books read during the current round may be applied towards goals, once the round has ended those books may no longer be used for a goal.

- Once you merge teams, you may use your books for your partner teams goals. List them in your books list and on their goals sheet. Mark them as used.

- If you end up with more than 3 open goals, contact a moderator for help.

Hi Sarah and everyone else. Very excited to be on team Xena.

Hi all!! Is everyone ready to get started?

Can't wait. I have been challengeless for almost a week now so feeling a bit lost :)

Hi everybody. I didn't know the teams were posted. Wow I'm glad I caught of of the other teams posting or I wouldn't have known. I hope everyone is ready for battle :)

Monica I 'm going to save a few spots for us since the Mods must have forgotten to do that.

◈ The battles take place between each team at the end of the round.

◈ A gladiator may gain an advantage through two methods: attack and defense.

◈ Defense points are awarded for completing goals. (1 point of defense per goal)

◈ If a teams defense is higher than the attacker's attack power, the hit from the attacker will be 0.

◈ There will be 3 defense goals active for each gladiator, when one is submitted on the spreadsheet, another will be automatically generated a short time after.

◈ Any book read during the current round may be used to complete goals.

◈ Books read in a previous round may not be used on new goals.

◈ Attack and defense points carry on into the next round and are added to your gladiator teams total point value.

◈ Ties in battle will result in both sides receiving a victory point.

Go right ahead Carmen. Not sure if I should reserve any. Getting excited and nervous about this game.

Sarah all I know is we have to read at least one book in 2 weeks. I will learn as I play.

Monica wrote: "Go right ahead Carmen. Not sure if I should reserve any. Getting excited and nervous about this game."

I am too. If you want you can reserve some if you think of anything that we might need it for later. I'm going to put the rules and the teams shelves. It might be easier to check posted books.

Do you want link's to our shelves for the books?"

I've been working on some of your shelves but some don't have a specific shelf or they are private but once you have the shelf I would greatly appreciate the link :)

Your ok Sarah. I have your shelf. If you see the post I made. If you click on your shelf name. It will go directly to it. So you are ok. Only the one's with the missing shelves are missing.

Sarah wrote: "Sorry did not see that you posted that. Thanks!"

Your welcome. I might have been working on it while you were posting LOL

"She was Xena, a mighty Princess forged in the heat of battle!"

Eni wrote: ""She was Xena, a mighty Princess forged in the heat of battle!""

Hai :D I may or may not have been a Xena fan when I was a teenager xD

Eni wrote: "Hai :D I may or may not have been a Xena fan when I was a teenager xD"

Mod
The master spreadsheet and team spreadsheet has been added to the beginning of your team thread.

Captains and co-captains should message the moderator account with their team name and google doc e-mail to be added to the approved editors of the team spreadsheet.

Here's the link to my shelf - Gladiator games

Hi, Looks like you've all been busy while I've been sleeping.

Apparently my goodreads app hates this thread as it keeps crashing everytime i try to open it :( so appologies now if I miss anything.

I've set up my shelf but not sure how to put up a link. Can you find it?

Was going to check our clues and start planning my reads but can't access the spreadsheet. Is it just me?

Alison I'll take care of it later today. I'm on the app now and can't really do much on as you know LOL

Alison wrote: "Was going to check our clues and start planning my reads but can't access the spreadsheet. Is it just me?"

No, our team spreadsheet link is coming back to this thread. Now I'm curious about our goals. :p

Mod
That's because there was no link :)

Moderators of NBRC wrote: "That's because there was no link :)

Sarah wrote: "I have a question... Can you read more then one book for a goal? Like for the Read a book whose author (first or last) starts with R can you read all your books for that goal or just one book a goal??"

Only one book counts for each goal. So after one of you read R book, you'll get new task.

We are not saying that only one person can read book for a goal, but there is no point for it. As far as I see most teams will have first comes thing going on. Meaning, few people might be reading book for a same task, but book that is read first will be the one that goes for it. It kinda makes sense since it's better for a team to finish task quickly and get new one. More tasks finished, more points
Now, even if you are reading book for a goal and someone else is faster, your book can still be used for another goal. Or it can be used for attack points.
Every read book during challenge (that fits requirement) can and will be used just not all in the same way. :)

But in the end it's up to team and your captain how you'll work on tasks. Will one person read for one task, or more, up to you.

So do we have a plan of how we want to do this? Do we want to allocate clues or just all do our own thing and see who finishes a book that fits first?


I think using the first book finished might be the best approach, since that will allow us to rotate goals quicker. We'd just have to make sure we have all of them covered, wouldn't want to leave a poor goal all sad and alone. :P But I'm ok with however you guys want to do this. :)

Sounds like a good idea to me Filipa. I have a couple of books on my kindle at the moment which will work for either author starting R or weapon on cover. I can't think of any with a teacher.

I have books for all of them, especially the weapon one. Soo many weapons. lol

❀Tea❀ wrote: "We are not saying that only one person can read book for a goal, but there is no point for it. As far as I see most teams will have first comes thing going on. Meaning, few people might be reading ..."

Thanks Tea for answering the questions. It's been a crazy day at home.

Ok ladies. How would you like to do this? Would you like to pick a goal and maybe see who can get it done and then maybe use the other books for the next goals? The faster we get the goals completed the more points we get. What do you think? The more stuff we can collect for other goals too will be a good idea too. Since we can use read books for upcoming goals as long as there from the first 2 weeks.

I'm still missing Catherine. I PMed her and waiting for a response. As for our new teammate Zanyar,welcome to Team Xena.

I have a few books with teachers.

I have Divergent I am starting and the authors last name starts with R.

I guess we'll start our books tomorrow then work our way through and see who finishes what until we here from the other 2 team members.

Hi Catherine. What are you confused about?

Hi all, I started and finished The One by Kiera Cass today. Doesn't fit any of the clues as it sounded like they were all covered but we can use for half an attack point or wait and see if it fits a future goal.

Any preference to what I read next or should I just go with whatever?

Anything we read can be used? Or do we only need to use books that fit the clues?