Thank ya thank ya~. Any fresh ideas~?

No fresh ideas.. So sad! TT^TT

AHH SO SORRY THIS IS SOOOOO LATE> I'VE BEEN SO BUSY WITH COMPETITIONS AND SUCH, AND ANOTHER ONE'S COMING UP!!! I hope you can forgive me...TT n TT

That sums it up. {sadly}

I can do any of those~

DUUUDE, WE SHOULD TOTALLY DO THAT!!! BY LIKE, A guy who has special powers (TBA) is suddenly kidnapped by a gang, but one of the captors is actually a double agent for another gang, who saves/kidnaps the boy to another gang and yadadadadad, good shtuff!

u can do however many you want! Just got back from competition ~

Okay, tis fine. I'll make a profile for it tomorrow if i have time~ 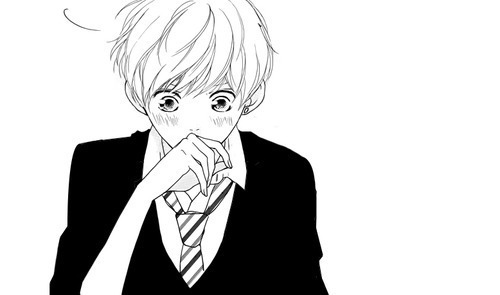 blonde hair, grey eyes
Personality: A little blunt at times, but he doesn't mean it in a bad way or anything; he's always an honest kid and gets easily bullied or embarrassed. Gets pushed around sometimes by his little sister Rei. Part of the Yellow Scarves Gang. 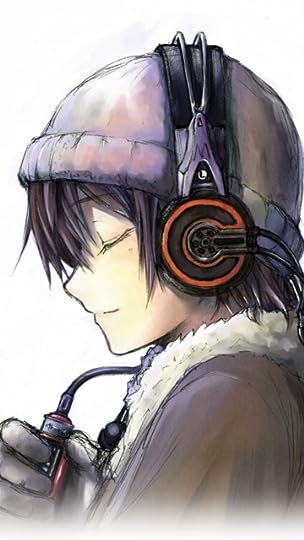 Black hair, grey eyes
Personality: She's easily mistaken for a boy since her brother's weak at times, but she's a strong girl who stands up for what she thinks is right. She's protective of Kyo, her older brother. Part of the Yellow Scarves Gang. 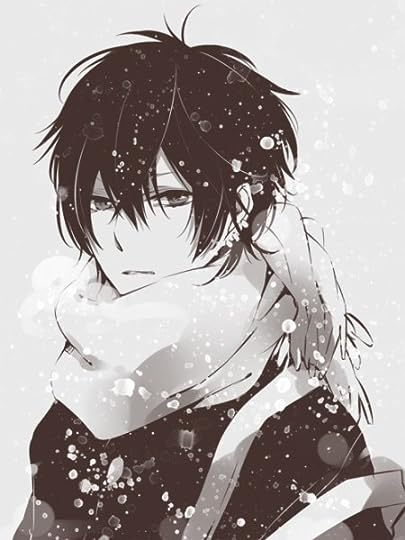 Black hair, black eyes
Personality: Silent and very aloof. He doesn't say much in front of lots of people, but he's really smart and sometimes sadistic. He's always right, and he can be arrogant/sarcastic at times. Unbeknownst to others, he's a secret double agent/mediator between the two gangs.

Yeah, just for starters, in case those names pop up with no reason, and yeahs~ I guess my main guy would become Kuroh then~

Cool! How many people should I make?

However many you want! I'm just probably going to add more in later.

Blonde hair, red eyes
Personality: Although he looks like a really amiable guy, Moda's scary when he fights, and he's a smooth talker. He's the leader of the gang against the Yellow Scarves. His hidden agenda to obtain a person with power is to heal his girlfriend who has a chronic illness.

If you want, you can make the leader of the Yellow Scarves and Moda's girlfriend or whatevers too~

O v O NAO, I WONDER IF THAT'S GOOD OR BAD. XD I WANNA SEE YOUR CHARRIES TOO~~~

I NEED A COMPUTER. LATER ON!!! 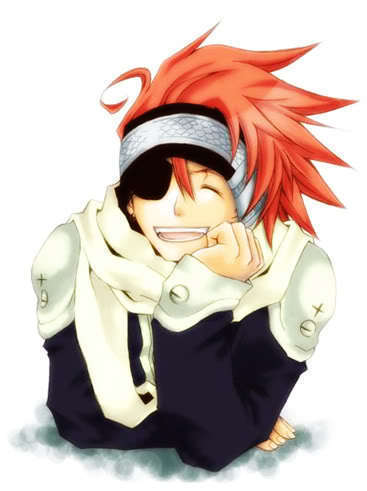 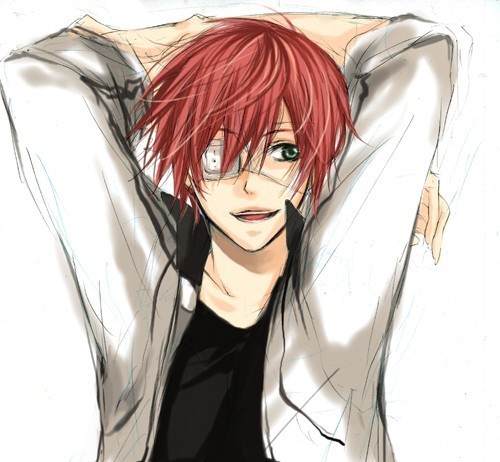 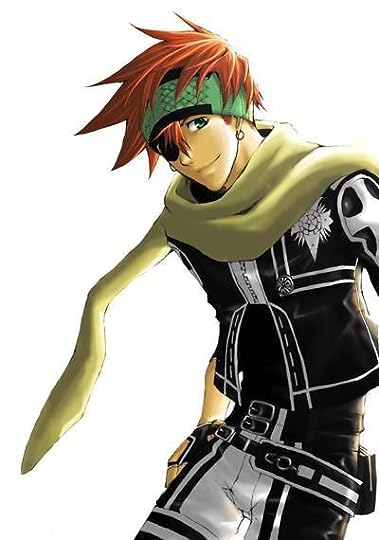 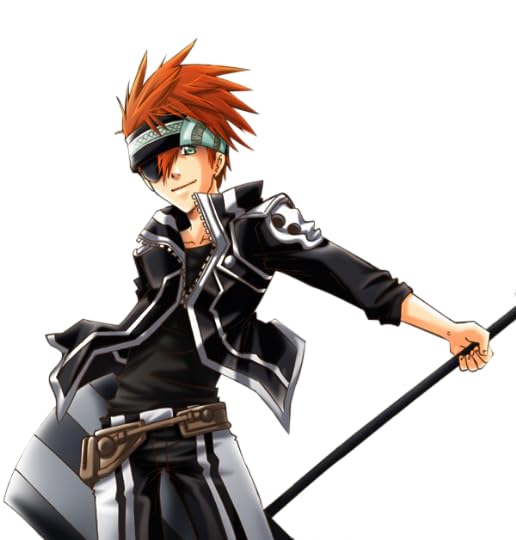 Strengths:
- Sleeping. No one can wake him up.
- Healing. There is no better healer than Kei.
- Resilience. He won't give in, especially if someone tries to force him to use his powers.

Weaknesses:
- Fighting. He's no good with hand to hand combat, therefore he uses a sort of rod with a very small hammer at the end. BUT. The small hammer can enlarge into a huge ass hammer which he uses to fight.
- No sense of direction or time, so is usually late to most occasions.
- Weak eye. He wears an eyepatch because his eye is now a fake one ever since he lost it in an accident.

IS HE THE KIDNAPPED GUYY~?

Seeing as he has powers... XD yep.

NIIIICE. ALL RIGHT, SHALL WE BEGIN THEN~?

Hmmm...let's have Kyo and Rei already be friends with Kei at school, and then move on from there~?

How is Kei gonna be caught by Moda?

I feel like the Yamato siblings are going to end up kidnapping Kei against their will, and Moda captures Kei in their secret fort, and yups.

Yay! You start it then?

All right, I shall do my best! Feel free to add random side characters (as I will most probably do often~)

The clock struck twelve, and the bell resounded down the empty halls. Suddenly, the doors burst open, and everybody poured out from the classrooms that held them captive.

"A-Ah, don't trample me!" a blonde boy was whining as everyone stumbled out of the classroom. "Ah, Kei, wake up! Class is over, and we have to meet up with Rei! Keeeiii!" he poked the boy beside him.

Kei was off in some wonderful dreamland where bunnies were rainbow coloured and horses could fly. "One more minute... Mom.." he said sleepily and continued sleeping. "Or make that.. Two minutes.." He added afterwards.

"K-Kei! We're going to dieeee under Rei's hand!!!" Kyo was flailing now, weakly batting Kei to wake up. "You know how crazy my little sister is! I don't want to dieee!!!"

"Five minutes!" He groaned, shifting his position. "I need to sleep more..." He sighed and continued to go to his dreamland.

Suddenly a familiar girl walked in and kicked Kyo, who fell onto the floor, sprawled out. And Kei's head was smashed by said girl's fist.

Her steel grey eyes were flashing with annoyance as she barked, "Oi, there's no melon bread left in the cafeteria, thanks to you two slowpokes." She sighed. "The things I do for you guys," she pulled out two extra bentos then motioned for the two boys to follow her. "It seems as if the roof top is empty."

Kei got up and like an obedient robot followed her. Where food went, he also went. "Heaven, is right before me."

Rei blushed furiously as Kyo added to the unnecessary attention, "Goddess of happiness~~~~"

"Oh my gosh, it's those three hot guys again!" Rei heard the girls squealing as they walked past. She sighed, tugging her hair. "I mean two cute guys and one girl," another quickly corrected, lest Rei heard them.

Finally, the three were alone on the spacious rooftop.

"Since when am i.. Classified as.. Hot? I'd prefer Red.. Weird.." Kei admitted to no one in particular as they arrived at the rooftop.

Kyo grinned at Kei's comment then proceeded to literally pounce on the bentos once Rei pulled them out. "Ikedaimasssssu!" he clasped his hands together, eating quickly.

"Don't eat too quickly, you'll choke-" Rei began to say, but suddenly her phone rang. "I'll be back," she nodded, heading behind the A/C to take her call in private.

Kei tilted his head, watching Rei leave before starting on his bento, eating at a reasonable pace and chewing thoughtfully. He didn't know why he was even thinking about something that didn't really matter. His ears heard everything around him, even the chirp of a faraway bird.

"H-Heichou, I can't do that!" Rei was arguing with the person on the phone. "He's my frie-" she paused, listening to the person reply. "I can't, I'm sorry." She hung up, obviously annoyed when she came back to sit with the two boys.

Kei heard her voice and frowned slightly. What?? He watched her return. "What's wrong, Rei?"

"Ah, it's all right, it was nothing," Rei quickly smiled, then frowned. "You guys ate everything..."

Kyo blinked innocently, then stared at the empty container in front of him. "Ahh...I thought it was for me too..."

"I blame Kyo. I only ate what I got." Kei immediately said.