Girl lives with her aunt and uncle. Her father is ostensibly an art dealer in the orient, and has not been heard from in a long time due to his travels. They have just moved from apartment life to a mansion that has been subdivided into two residences, and it has an old-fashioned elevator in it. She receives a piece of hanging wall art: a (Korean?) scroll from her father.

She gets stuck in the elevator and overhears something from the neighbors that she shouldn't. (view spoiler)[The neighbors are foreign spies, and it turns out that her father was spying on Korea when his plane was (shot down?). The tube of the scroll was hollow, and it contained a coil of (audio?) tape pertaining to his government work. (hide spoiler)]

Thank you for your help!

Long shot: The Chinese Scroll Mystery. Some of the details fit, others don't.

It sounds intriguing anyways! :) I think the heroine of the one I'm trying to remember isn't as old as someone with a part-time job would be, and the action was pretty much confined to the house. Thanks for the suggestion! :)

Mod
Estencele, are you still looking for this?

Girl has chestnut hair. Maybe a windy fall day with leaves blowing when it opens.

Uncle used to live in apartments all his life, because all you had to do was call the maintenance guy to fix whatever was broken.

Somehow Aunt and Uncle ended up in half a mansion that has been split into, perhaps, a duplex, with a private elevator in the middle (but in the Uncle's half of the house). The former owner, when the house was whole, had been an invalid, and the estate was later subdivided.

Main Character Girl goes to live with them because her father is missing. She carries hope in the face of despair that he's still alive, since he was just a humble art dealer. She treasures the variety of knickknacks he's sent her.

Perhaps there's a slumber party at one point in the book where she invites a bunch of girls from school over to try and bond with these new friends in this new town.

I think the elevator initially gets stuck in a storm, which may or may not overlap with the slumber party. She later deliberately stops the elevator between-floors to eavesdrop on conversations on the other side of the house, at least once.

A YA book most likely written during the 50's when communists and espionage were popular topics. Perhaps during the Korean War. Not part of a series. The one I read was a blue hardcover in library binding with a faded cover, perhaps of a girl eavesdropping in an elevator? Originally read from the Boulder Public Library in the 1980's, but as I've checked their catalog for all their mysteries of that period and haven't found it, I'm sure it's been long since removed from the collection.

Mod
Mystery of the Secret Message

From an Amazon user review: "The heroine is a young girl named Penny, an orphan who lives with her aunt and uncle. As the story begins, they are moving into a house from the apartment where they used to live. Penny is happy about the move because she knows that she won't have to worry as much about being quiet and not disturbing the neighbors, like she had to do in their apartment. This means that Penny can bring her new friends over to the house to play and have parties. Also, their new house has a very special feature: its own private elevator. However, events take a disturbing turn when Penny receives a package from Japan containing a beautiful wall scroll. The package appears to have been sent by her late father, who used to travel a great deal on business. However, he was killed in a plane crash. Was the package sent before his death, or did he somehow survive? Also, there is something odd about Penny's new neighbors. When Penny accidently gets stuck in the elevator and hears voices coming through the wall, she starts to suspect that her neighbors might not be what they seem to be. When a stranger arrives on the scene to offer Penny an explanation, Penny must decide whether or not she's willing to take a big risk to get to the truth."

That's it! I've been trying to figure this one out for so long. Thank you so much!

What a great retro cover! 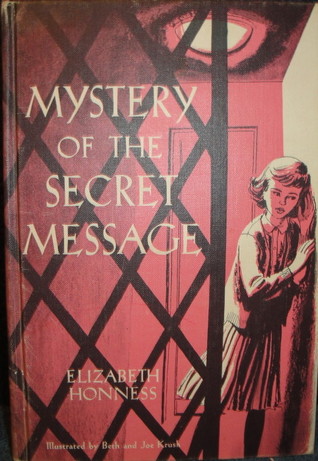 Mod
Beth and Joe Krush - they never fail you.

They illustrated the Borrowers series.

Mystery of the Secret Message (other topics)