Ira Adler - what a lovely name, it rolls of the tongue so nicely (shades of a Sherlock H character perhaps). Ira is young, he’s gorgeous, he’s gay and he’s a survivor. His childhood (which is revealed slowly throughout the book) is full of traumatising memories, deep hurts, abandonment and broken promises. After selling body and soul for years, Ira has finally climbed his way to security and success – for the past two years, he’s been the current live-in lover for Cain Goddard, failed academic and philanthropist of sorts. Cain Goddard who is also known as a crime baron/lord. When Cain sends Ira out back into the streets of Victorian London to retrieve a black china figurine of a dog, little does Ira know that his hard-won seemingly secure and pampered world is about to come crashing down around him.

Utilising all his acquired street-smarts and lock-picking skills, Ira has to battle all manner of folk to get his hands on that porcelain dog – he knows that Cain’s reputation as well as their lives depend on his successful mission. In doing so, Ira comes face to face with Cain’s underworld connections, dealings, businesses and foes; all manner of nefarious and unsavoury goings-on come to light. Ira is aided and thwarted in his quest by past lovers, friends and acquaintances from his ‘bum-boy’ working days, as well as high-powered, well-placed society folk. Something big and bad is going down, especially as (to quote a phrase from “Thoroughly Modern Millie”), the Chinese are involved LOL!

And it becomes increasingly clear to Ira, as he follows lead after lead as to the whereabouts of that dog, his dilemma and predicament is over whether he can trust those from his own camp. His ‘position’ in Cain’s household is threatened by those within who resent his upstart presence. Can he trust Cain’s motives behind this seemingly foolhardy mission? Can Ira turn a blind eye and accept his lavish, protected lifestyle, given what is being revealed regarding the financial source of Cain’s wealth and power. Should he even trust Cain the man himself, given the mysterious disappearances of his predecessors?

Faraday does a superb job with the world-building / setting of the late 19th century London. The streets and landscapes, the sights, smells and sounds, the people from various levels of society – my mind’s eye was captured and taken to a whole ‘nother world. This is no quiet melodrama – a LOT happens over the course a few action-packed days. The author also provides a big cast of characters (most of whom are well drawn) but these are all integral and necessary for the plot. ‘Good guys’ as well as ‘bad guys’ get killed. And as for the romance aspects – there’s not a lot of descriptive sex folks – but I didn’t mind this too much since I approached the book from a mystery-crime reading angle anyways.

There was a satisfactory resolution of the mystery-plot (what exactly is in that dog that makes so many people want to get their hands on it – even kill for it?) but I have ambivalent feelings regarding the not HEA ending (some important things were left “up in the air”). I was also a little taken aback by where the author took the Tim Lazarus character – I remain unconvinced and unsatisfied with how Tim and Ira attempted to resolve/overcome their common past.

I’m so glad that Faraday will be releasing the next book Turnbull House in this series shortly, as I do want some sort of resolution/development for Ira and Cain (and yes even for Tim). It will be very interesting indeed to see how the author integrates a notable/infamous person (Oscar Wilde) with the books’ cast of characters. Goody goody. I'm also very keen to explore what else Faraday has published to date. 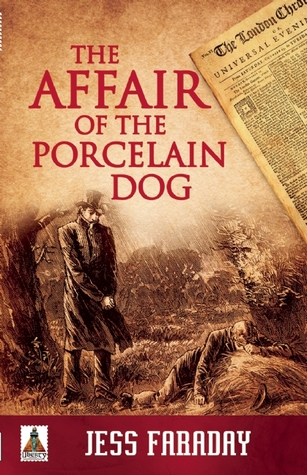 Don wrote: "Great review....I've been reading this book, but put it down for some book club readings....I've enjoyed what I've read so far."

I look forward to reading your thoughts on this Don. Cheers.

Don wrote: "I enjoyed the book tremendously. Faraday does a great job in putting you there.. [spoilers removed]

Faraday is very ambition and the book is very busy, but she ties it all up nicely and everythin..."

Oh I agree that the world building is excellent. Almost as good as Death by Silver - but you'd have to be a paranormal/fantasy fan to appreciate that one.

I've finished Turnbull House and am putting together a review for posting.

Ugh. My "to read" list just got longer! So many books, so little time...

LOL. I've picked up so many excellent books just by seeing what other forum members are currently reading.

I'm late to the party, but I enjoyed this as well, even though Ira is sometimes irritating. He does some very silly things! But I've just finished the third book in the series, so I might be judging him from the future.

Aussie54 - I did notice that he matured a lot over the period of the 3 books. Good to see.

Aussie54 wrote: "I'm late to the party, but I enjoyed this as well, even though Ira is sometimes irritating. He does some very silly things! But I've just finished the third book in the series, so I might be judgin..."

Yes Ira's silliness can be annoying but I have to agree with Aussie54 - he did mature by book 3.
He's nowhere as 'silly' as characters such as Gillibran Brown (who I have a soft spot for anyways), or Skyler Foxe (Hayley Walsh) or Jory Keyes ( Mary Calmes) who IMHO is the epitome of 'silliness' and whom I've imagined as a reincarnation of Lydia Bennet!