Guy A is a lab experiment. A robot. However he looks and acts perfectly like a real human and the only backside is that he doesn't know what feelings are. He's ordered around and is practically a mechanical servant for his creator, Guy B. Then one day, another robot with similar realistic features joins the lab experiment joins them, he is Guy C. Guy C looks like a real human and acts like one, and the only difference between he and A, is that Guy C... He can have feelings like a regular human. Basically, Guy C charms A, who is having trouble with classifying what he is feeling. Guy B, the original creator of A isn't happy and he does everything he can to separate A and C, for fear of losing control over A.

Age: His creator made him look 17 forever. 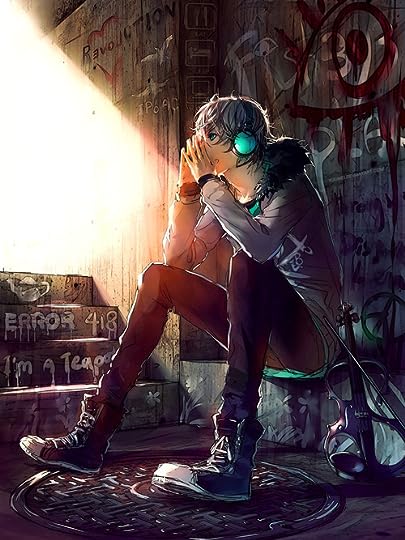 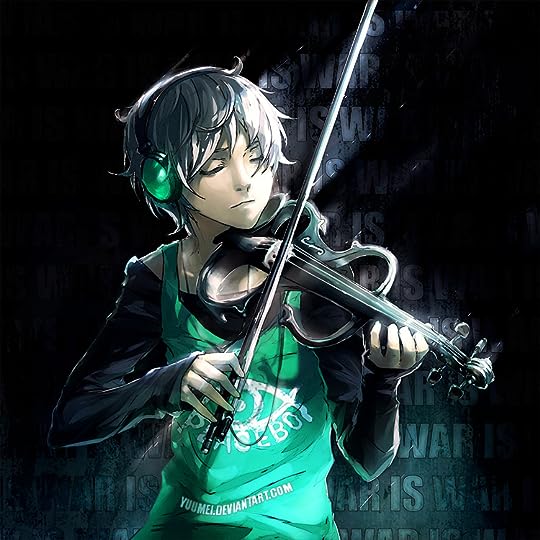 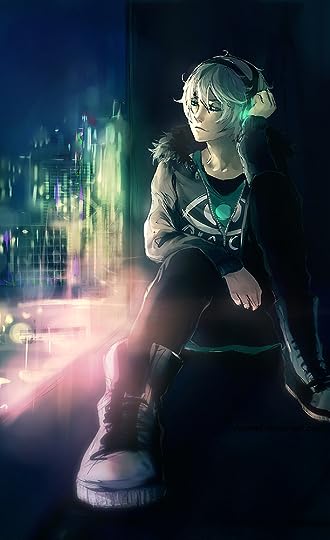 
Personality: Frey is very easy to manipulate because he doesn't have real feelings. His creator simply has to speak to him and he'll do anything, even kill himself. He definitely doesn't know what love is and has trouble even knowing what he is feeling. Frey doesn't like his creator but he can't express hate, and is basically a mechanical servant for his creator who is a jerk to him and treats him like dirt. He doesn't know if he's worthy or not, and spends most of his time stuck in his robot cell that the scientist, who was his creator, made.

Creator: Frey only knows to call him either Professor XZ / Professor X.
When he's not so insane: 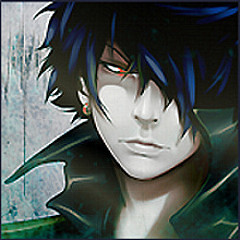 When he's full on satanic scientist: 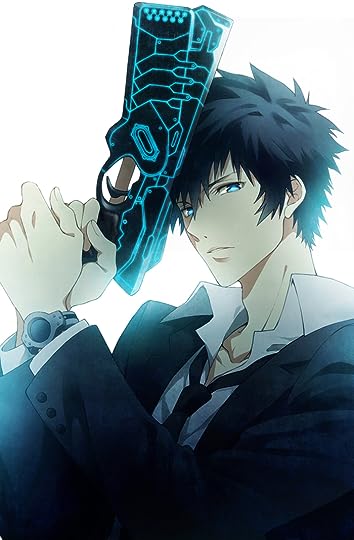 Information:
- When satanic, his voice is calm and soothing while he calmly cuts off a body part, disables a person, ends a life, even when he makes his creations do the unthinkable.
- Scary at all times.
- Over possessive
- Don't hijack his creations, you'll wake up without a body.

{{Up to you. You can use a picture and name only or whatever you want. And we'll be taking turns being B.. }}

((Oh okay if it's okay with you I'll do what you did with guy b. like name age and need to know info)) 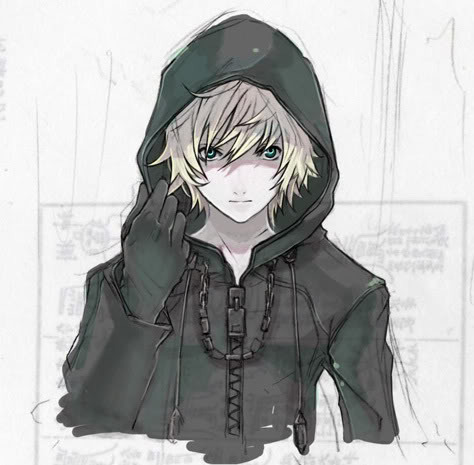 Need to know: jasper is a smile box. He loves to laugh and giggle like a little kid. He is a little kid at heart. He likes to joke around and play pranks. He craves to be ruled over, he wants someone to tell him what to do and how to do it. He also craves to make people happy and meet what ever needs they have. He usually does things without thinking. He is loyal, but very stubborn and if he gets something in his head you cannot convince him otherwise.

XZ pressed a buzzer which brought Frey to his side. "What should I do?" He asked blankly. "Jump off a cliff. Now." X's commanded harshly. Frey nodded and began to walk out, before bumping into another guy. Or was he a guy? Or robot?

"Hi!!" Jasper said cheerfully to the guy, who was slightly taller and a lot more serious "who are you?" He asked looking up at him. Jasper's eyes were shining as his bright torques eyes looking up at him happily.

Frey ignored him and went towards the cliff nearby. "G4B2Y, order canceled." XZ said impatiently and Frey turned to him. "Who are you...?" The scientist asked Jasper.

"G4B2Y get here now." XZ snapped.
Frey nodded and went to him. Then the professor smacked his head harshly and knocked him off his feet. Frey's back was on the ground as he sat up. "What did I do wrong?" He asked blankly.
"I told you never to talk back to me!" The professor hit him again.

"Hey!!!! Stop that!!!" Jasper yelled and stood in front of Frey "don't. Hit. Him!!" He said in a scowl. He had not right to hurt him for not doing anything!! Anger boiled inside him as he blocked the creator from Frey

"Did I build you to have a personality? I guess I did." The scientist sighed. "He's a robot. A late version. You're the modern one. He doesn't have feelings. He doesn't know them." He continued.

Frey looked up at Jasper slowly, a hint of confusion in his eyes as he saw the other boy protecting him.

"It doesn't mean you can hit and hurt him how you please!!" He said still standing over Frey still a stubborn look on his face he wasn't going to let him hurt Frey again.

"G4B2Y, stand up and come here." The professor intoned and Frey stood slowly, about to walk to the professor. His expression was blank yet mystified.

"Don't you dare hit him!!!!" Jasper said again stepping in front of him again. His eyes filled with anger as he stood very protectively in front of him.

Jasper.. Frey thought in his mind, looking confused. "G4B2Y, proceed to stage 5." The professor commanded and Frey gasped, his eyes hardening as he was suddenly malfunctioning. Stage 5 was hacking.

"What is he doing?!" Jasper asked looking concernedly at Frey then angrily at the creator.

"Stop hijacking my creations." XZ said furiously at Jasper. "Because you made him have a feeling, I'll have to restart him form the beginning."

"I'm not doing anything!!! And no!! Don't start him over! Sir he is still following your commands can't you just let him have one feeling?!" He said then turned and said "Frey stop don't listen to him!"

Frey's eyes cleared and he looked at Jasper. "What should I do..." He trailed off softly, seeming very confused and lost.

"G4B2Y, leave." XZ said angrily and Frey stumbled before moving towards his room/cell. "You, go with him." He pointed at Jasper.

Jasper turned and walked behind Frey quickly. He went into the same room cell as Frey. "Are you okay?" He asked him concerned

Frey hesitated and nodded slowly and uncertainly. "What is the real definition of 'okay'?" he asked.

"Are you hurt? I was worried about you... I don't like seeing people get hurt..." He said seriously and jasper was rarely serous.

"Hurt..? What is that?" Frey tried to be emotionless but he felt weird. Why was he feeling this now?

"Pain... It's when you feel pain and I ding like seeing anyone get hurt... Jasper said sitting on his bed and looking up at the older boy.

Frey sighed. "I don't know what pain is." He lied a little.

"You don't have to lie... We all know what pain is... Disappointment... Fear... Disgust... Worthlessness... Those are the emotions he wants us to feel if we feel any because that keeps us feeling worthless... Keeps us serving him..." Jasper looked down then looked up and took frets hands in his "but there are more emotions out there!!! Ones of joy and hope and happiness and awestruck and and love!!! They're all out there!! He just doesn't want us to find it!!! We HAVE to find them!!! We... We just have to..."

When Jasper finished talking, Frey found that he had tears in his eyes for once. They ran down his face as he listened, his eyes wide. "I......" He didn't have any words to say.

Jasper wiped the tear from his face with the pad of his thumb "it's going to be okay..." Jasper said with a sweet smile

"How can you be a robot who acts so different from a blank faced creation like me...?" Frey whispered.

"I was always a glitch. I didn't always listen he got mad at me sent me to be destroyed... I escaped and ran away I learned how to feel and be free! I can help you just like a human kid helped me!" He said cheerfully

"We've got to escape then!! You can't live a life like this!!" Jasper said looking at him with concern.

"But if he commands me to come to him I have no choice but to obey." Frey said sadly. Then he received a command. He stood and walked out, to be brutally scolded and abused by XZ who then began to reprogram him painfully and harshly. And, the cell door was locked so Jasper couldn't go out. The entire time, Frey had a very pained expression along with fear. Reprogramming could kill him.

"Project Jasper, shut down." The professor tried to command but it didn't work somehow and he took out his anger on the robot, Frey.

Frey slowly smiled a little. "Jas...per..." For the first time he said the other boy's name. Then he was hit again. "Don't you dare say his name." XZ hissed and seeing Frey about to protest, smacked him.


{{ this is how XZ tried to separate Frey and Jasper from getting together.. Can you be XZ now please? :) }}

((Yeah now I understand his personality thanks!! :D ))

"Frey!!!" Jasper yelled as he was hit again "no please!! Stop hurting him!!" He yelled tears filling his eyes

XZ scowled "you are going to regret ever seeing project jasper!!" He said yanking G4B2Y up by his shirt and off the ground

Frey managed a small smile. "It was worth seeing him even though it was a short time.." He said weakly, his eyes flickering.

Rage filled xz's eyes as he throws him to the ground

"Frey!!!!!!" Jasper yelled and gripped the bars if the cell and pulled them apart and ran forward towards Frey

Frey closed his eyes and laid there, looking terrible. However when Jasper came to him he simply tried to open his eyes. "Hi..."

Frey's eyes widened as he saw Jasper get hurt. "No... I should..." He winced and slowly got up, then shoved XZ away from Jasper.

"Did you just act against me?! Big mistake!" XZ hissed and threw Frey into a cell and strapped jasper down into a table.

"No! Jasper!" Frey tried to break the cell door and only succeeded in having it crack a little. He kept trying and trying to bring it down.

"You're a glitch and I'll just have to fix you." Xz said standing over him a evil and insane look in his eyes

"Leave me alone!!" He yelled thrashing trying to break free of the restraints.

Frey widened his eyes. "Stop!!" He yelled, unable to watch anymore. He kicked the bars until one broke and he could go out. He did and he tackled XZ just as the scientist was about to do something terrible to Jasper.