A little girl (I think it would be cool if her age was around 6-12.) meets a talking train, who is an evil, devious, sadistic diesel engine, and she ends up befriending him and capturing and warming his heart, and later on, as their friendship bonds more, she tries to convince him to become a good diesel (which ends up being successful).

reply | flag *
message 4: by [deleted user] (new)
Feb 10, 2014 07:42PM
Sounds perfect to me. Oh, and just for the fun of it, along with my diesel charrie, I'll go ahead and add the charries of four other diesels, who are friends of the diesel. I have a feeling they will very much likely be involved throughout the RP.

Name: Diesel 10.
Age: Unknown, but he has been known to say he's been around for ages, so he is quite old.
Gender: Male.
Personality: Evil, conniving, bullying, nasty, diabolical, psychotic, murderous, twisted, and creepy. He has a caring side that he rarely shows. But at the same time, he can be very comical accidentally, and he can get very clumsy and mess up. Then he is a total klutz. He can act cowardly when frightened. But if you really want to get Diesel 10 on his good side, have him be around children. That is his huge weakness.
Appearance: 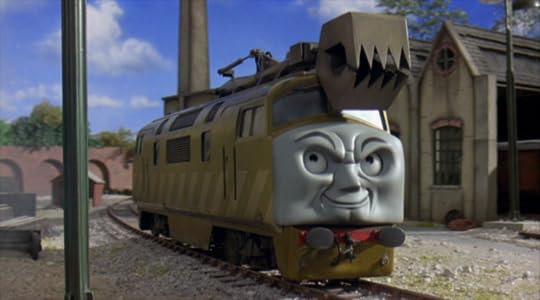 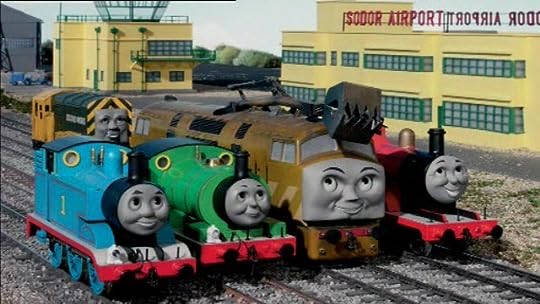 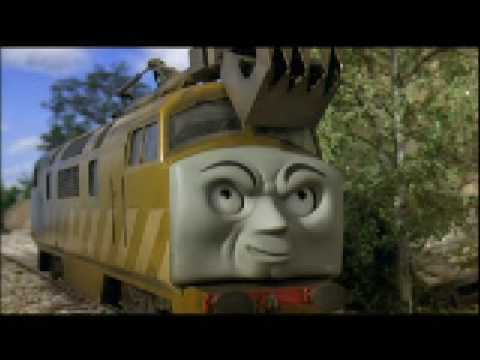 Likes: Being evil, cackling wickedly, destroying steam engines, and children.
Dislikes: Anyone who gets in his way and steam engines.
Where he lives: In the domain of the evil diesels.
Other: Anything else about him shall be roleplayed eventually.


Name: Arry.
Age: Unknown, but old.
Gender: Male.
Personality: Scheming, mischievous, evil, twisted, devious, wicked. But he can be caring, kind, gentle, and a total klutz. He is very awful with teasing and scaring engines, but yet he can get nervous easily himself when confronted by some supposedly scary object. He usually shows his soft side when around children, for that is his main weakness.
Appearance: 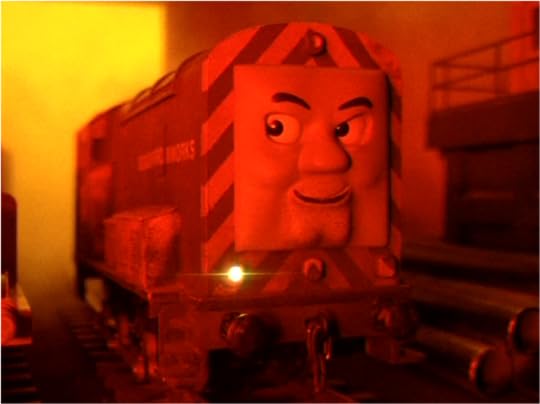 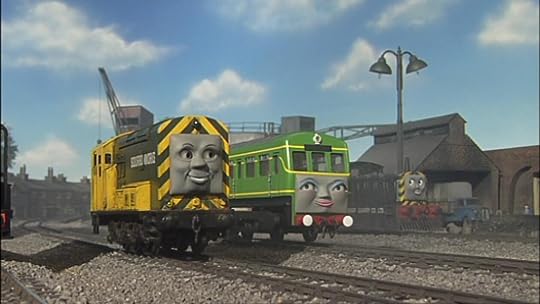 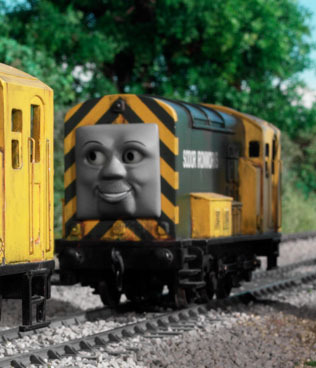 Likes: Scraping steam engines, teasing and playing awful pranks, doing his devious deeds in the smelter, and children.
Dislikes: Steam engines and anyone who gets in his way.
Where he lives: In the domain of the evil diesels.
Other: Bert is his twin brother. The two of them have the grim job of melting down engines in the smelter and turning them into scrap. 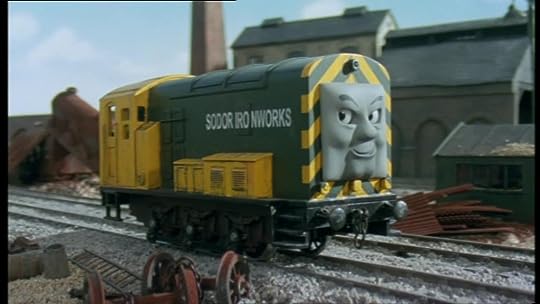 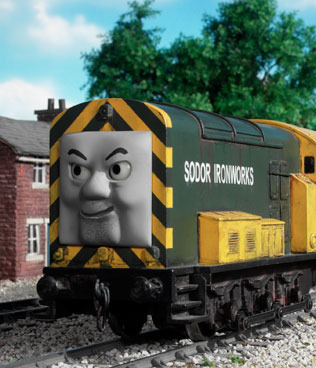 
Name: Salty.
Age: Unknown, but old.
Gender: Male.
Personality: Salty is a good diesel. He loves the company of steam engines and sides with them against the evil diesels. He is a diesel who loves the docks and the sea, and he has a sailor's accent. He is often heard telling stories of the sea and his adventures. He would be like a pirate, only he's too nice and kind to be a pirate. He is brave and loyal to all his friends. All in all, he's just a fun diesel to be around. Even the troublesome trucks love him.
Appearance: 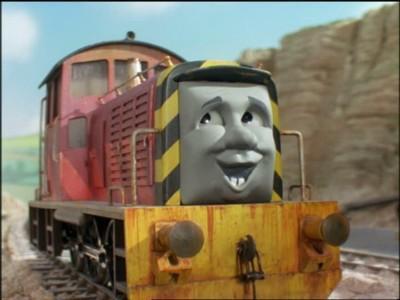 Likes: Steam engines, any diesels that are good, people, and anything that has to do with the sea.
Dislikes: Evil diesels, and anyone who tries to hurt his friends.
Where it lives: In a diesel shed by the docks.
Other: Salty has a great sense of humor.


Name: Diesel.
Age: Unknown, but old.
Gender: Male.
Personality: Diesel is one of the bad diesels. He is wickedly evil and utterly despises steam engines and loves it when he gets away with playing horrible and vicious pranks on them. When he first meets a steam engine, he pretends to be friendly, acting all nice and cool, but he is always obviously sly, for his voice is a purring voice when he talks. A smart person would easily be able to tell when he's faking friendliness. No one can trust him. He is always looking for trouble. Diesel is the same way with people. He could care less about them. Trying to befriend Diesel is like trying to befriend a tiger. If you want him as your friend, good luck! But you never know, though. Not all hope will be lost if you try to befriend Diesel. There are ways to get him on your side for good. All you need to have is patience, perseverance, and kindness. In the end, you may be greatly rewarded. Once Diesel genuinely considers you his friend, it will be obvious. You will be able to tell because he will never try to hurt you or play vicious tricks on you. However, he does have a great sense of humor, so if he ever plays pranks on you, they will be good, gentle, friendly, good-natured ones. His friendship with you would be obvious in other ways as well. Instead of his snotty, rude, sly, proud demeanor, he will go in the opposite direction and be loving and gentle. Not to mention, he can be quite fun as well.
Appearance: 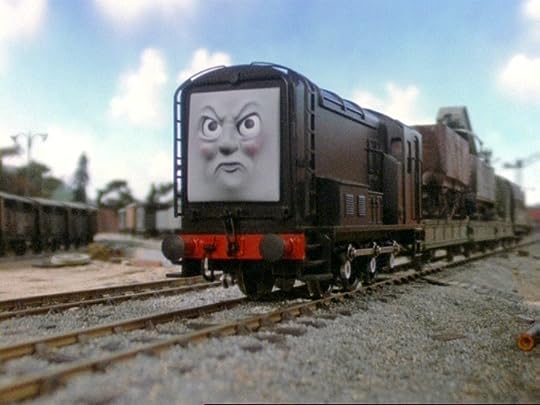 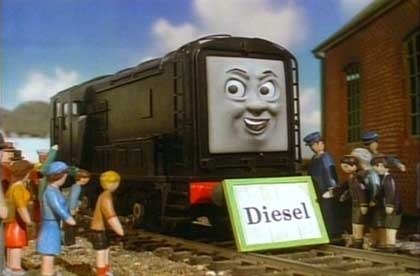 Likes: The companionship of other evil diesels, playing vicious pranks, and aiding in turning engines into scrap. And believe it or not, he likes children. But he keeps that secret to himself.
Dislikes: Steam engines and most people.
Where it lives: In a diesel shed not too far away from where Diesel 10 and Arry and Bert live.
Other: Anything else about him shall be roleplayed. 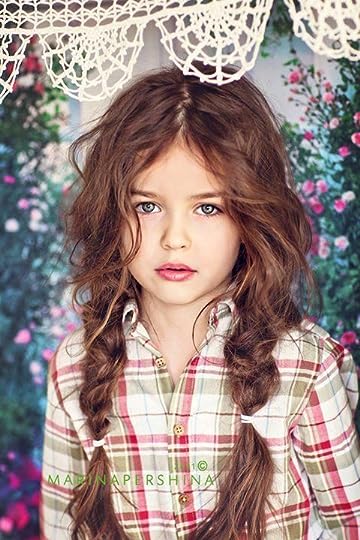 Likes: Her favorite red wagon (that she pulls around all over the place); her ragdoll (named Lucinda-Blue-Merryperson); Her yellow rainboots; climbing trees; the train station.

Dislikes: The fact that she doesn't have any friends; the color pink; others being mean; not getting to do what she wants.

Awesome. Do you want to start or me?

Would you mind starting?

It was a beautiful day. It was just after noon and sunny and yet perfectly cloudy. It was also a bit cold out, too, since it was autumn and in the late October. The evil Diesel 10 was snoring away in his shed, having slept through the entire morning. Arry and Bert and Diesel had long since been awake, and while they were on breaks from work, they would check on Diesel 10 to see if he had ever woken up, only to be in disbelief to see he was still snoring. Then they would mutter stuff to each other about how their boss was a lazy bum before they left to go back to work.

Splish, splash went yellow rain boots in the water on the rocky path. A small, young girl dragged a heavy wagon on wheels with a ladybug suitcase in it to match. She had tried to pull the two on their own but it was too much work, and instead she had lugged the case into the red wagon with a satisfied thump.

Sydney-Lynn threw one braid over her shoulder with a huff, her red tweed coat protecting the six-year old from the cold matching her boots, suitcase and wagon nicely. She sniffled, stopping next to a diesel shed, sitting down warily on an empty space in the wagon with a frustrated sigh.

Soon Diesel 10 finally awoke with a snort, his snoring ending with that snort. He raised his claw up and opened and closed it, as if he was stretching it, before he rested it back on top of him. The sound of a diesel motor started up as Diesel 10 got ready to leave. He purred slowly out of the shed, yawning. He didn't notice the girl yet.

Sydney-Lynn blinked, raising her head and smiling. She liked trains and diesels. Maybe she would follow that one for a while. She stood up, pulling her wagon along with her before she got to the tracks, walking along next to the slow diesel without saying anything.

Diesel 10 didn't notice movement off to his side until a few minutes later. When he saw her out of the corner of his eye, he slowly came to a complete stop to get a better look at her. It was a little girl. He smirked to himself and continued on slowly, entering into the country and going into a forest.