I have a few ideas:

I guess we could try to work with that 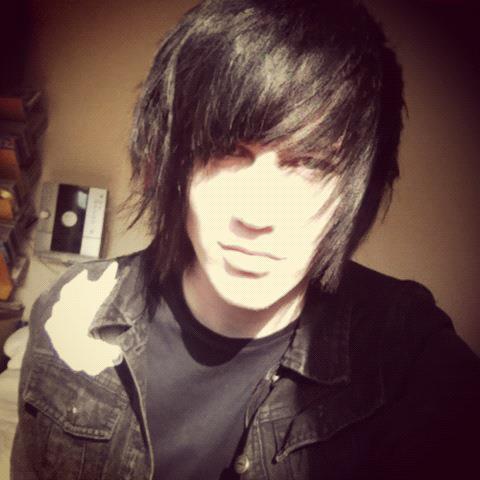 History: Alex was born into a family of humans, but somehow, he was born a shape shifter. Seeing what their son was, his family gave him up out of fear. Alex spent almost all his life in an orphanage. And for all that time, the kids made fun of him. They shoved him into walls, stole his lunch, and put traps in his bed. One day, they took the harassment too far. Alex was sitting in the reading room when a group of kids came in. They snatched up his book, and threw him to the ground. He tried to fight back, but they were stronger than him. One kid gave him a good punch in the face, and then something in Alex's brain snapped. He overpowered the kid on top of him, and beat the shit out of the others. After they fell unconscious, Alex quickly found a match and gasoline. He poured gasoline all over the bodies, and around the orphanage. He lit the match, and dropped it on to the bodies. The building went up into flames as Alex calmly walked away. Two weeks later, the police found him and took him to a special asylum.

Nope, I wish I did DX He's in a band and he has a YouTube channel

I could if you want

Alex lay there in his bed, staring blankly at the wall. He didn't move. He didn't twitch. He didn't feel like getting up, although he knew they would drag him out eventually. BANG! BANG! BANG! "Last warning Morianni! Get your ass up before we come in there!"

Alex groaned loudly and slowly sat up. "Keep your goddamn pants on, I'm moving!" he shouted to his escorts.

He stood on his feet and shuffled over to his tiny dresser that contained the same set of clothes that every patient had to wear. A white hospital shirt with a pair of white hospital pants. He grabbed a hospital shirt and slipped it on, along with the pants. He combed out his hair a little before approaching the door. He knocked twice, and his escorts opened the door. One had a black eye, given to him by Alex. Alex smirked and said, "I see it swelled up pretty good."

Both escorts grabbed Alex by either arm and dragged him down the hall.

Alex's escorts lead him to a small classroom. A couple other teenage patients sat at the tables in the room. Only two patients had escorts. Alex smirked, seeing a patient he had befriended last night. This patient was the cause for Alex's escort to have a black eye. His escort had been tormenting him, and Alex stood up for him. Alex hurried to his new friend's table and sat next to him. "Hey Jeremy! How's it hanging?"

Jeremy smiled slightly and looked up at Alex. Alex smiled back and noticed that Jeremy was fiddling with something in his hands. It looked like a photo. "What's that you got there?" Alex asked, nodding his head at the photo.

Jeremy's smile disappeared and he slowly put the photo in his pocket with a small whimper. Alex shrugged his shoulders and said, "Okay, you don't have to show me then."

Alex laid back in his chair. His eyes scanned everyone in the room. He frowned as he spotted a teen boy stealing part of a girl's breakfast. He sighed and got up, walking over quietly. Just as the boy was about to take a bite, he flew against the wall from Alex's slap. Some of the patients screamed from the disturbance, and a couple escorts threatened to beat Alex. Alex laughed and placed the rest of the girl's breakfast in front of her. "You're going to beat me up just 'cause I'm rescuing someone's breakfast? Now that's a GREAT reason to punch me!"

The girl looked up at him greatfully and Alex patted her head lightly. "Enjoy," he said as he went to go sit back down with Jeremy.

Alex closed his eyes, his head laid back against his chair. Suddenly, he heard more patients cry out. He jerked his head up and opened his eyes. He looked next to him at Jeremy, who was now cowering in fear. Alex slowly turned his head and his eyes widened as he watched a girl rip into her escort's neck. "Holy shit..." he whispered to himself.

He examined in awe as the girl continued to tear into his neck, drinking his blood. "Either this girl is totally out of it...or she's a vampire," Alex muttered to himself.

He calmly stood up and walked over. He gently placed a hand on the girl's shoulder and said, "Excuse me. I don't mean to disturb your feeding, but um...the others are really freaking out," he told her calmly.

Alex smirked a little and chuckled. "All the escorts think they're rough and tough until something like this happens. Then they're pretty much nothing but little ass wipes."

Alex sighed a little and smiled at Angie. "My name is Alex," he said, extending his hand for her to shake.

Alex's smile grew at her comment and he nodded. "Yes, you are correct. I am a shape shifter. I would show you, but I don't want to freak anyone out," he told her.

He felt a small tap on his shoulder and he turned his head. He smiled as he looked down at the girl he helped earlier. "Hey there. Do you need something?" he asked her.

She nodded shyly and gave him a tiny hug. Alex smiled and hugged her back. "Thank you," she said in a timid voice.

"It was no problem. He shouldn't have done that. It was your food, and he could have gotten some if he wanted," he told her.

She smiled and quietly shuffled away. Alex returned his attention back to Angie and smiled. "So, what did they put you in here for?" he asked.

Alex nodded and crossed his arms over his chest. "I see... Well, you're lucky to have parents. Mine ditched me at an orphanage as soon as I was born," he told her.

One of the teens rolled a ball on the floor, and Alex caught it with his foot. He rolled it back. "That place was fucking Hell. Everyone there hated me, and they all abused me," he said plainly.

"So one day, a group decided to gang up on me, and they ended up unconscious. After that, I burned the damn place down. And that's why I'm here now."

He backed away slightly, suddenly feeling guilty for what he had done.

Alex sighed a little and smiled slightly. "I only have a temper if someone is pulling off bullshit..." he said to her quietly.

His escorts came over and they both put their hands on either shoulder. "Alright pal, let's go finish what you started," one of them said.

Alex's smile was replaced with a frown and he said, "Bug off, I'm not finishing anything."

Alex smirked a little. "I didn't at first. When they first laid their hands on me, I almost killed them. Isn't that right?" he said as he turned his head to look at the escorts.

One of them smirked and said, "Yes, but you got put through shock treatment after that."

Alex growled under his breath and shouted, "You people know you're not supposed to do that! Not without permission!"

The other escort laughed and said, "Permission from who? You don't have any family. They gave you up because they knew you would be a little freak!"

As soon as the words were out, Alex socked the escort in the nose, completely knocking him to the other side of the room.

Alex smirked and grabbed the other escort by the neck, dragging him towards Angie. "Here's something to snack on."

The escort struggled against his grip and shouted to the other escorts, "You bastards, get me out of this!"

They all looked at him with pity. They knew that if they went anywhere near the two patients, they would most likely be toast.

Alex's smirk grew and he said to Angie, "How about it?"

Alex watched with a pleased smirk as the escort failed to struggle against Angie's firm grip. He looked back at the other escort as he watched in fear. The patients didn't freak. They seemed to have grown accustomed to the violence and blood.

Alex smiled up at Angie. "I've always told them that they would get what they had coming to them."

Alex laughed and smirked. "If that were possible, then maybe they would have a real heart. But I think they would become mentally insane. A bunch of wimps like them can't handle what we are."

He bit his lip slightly and nodded. "My first friend here attempted to escape, but he got killed at the last second. He was a shape shifter, just like me." He sighed heavily and looked down at the ground.

He nodded and frowned. "He did. I told him that he was an idiot for wanting to do it, but he didn't listen. He knew the risks, but he went for it."

He smirked a little and looked at her. "If this were my first week here, I would tell you what I told my friend. But I have more hope for escape now. These idiots can't do anything."