Mod
Thank you...so do you have any ideas? And do you do doubles?

I have a few ideas, and I'm terrible at doubles XD

Mod
Ok. Well why don't you share your ideas and we can go from there?

First, I have the basic ideas:

Then I have two ideas with a plot:

#1: A girl is beaten and crticized everyday for being who she truly is. A boy is praised and liked for being who he is not. As the girl suffers, he thrives. But he watches her, wanting to help her. Then one day, he does. He notices the bruises given to her, and the cuts formed by her own blade. He stands up for her, even if it means loosing his respect.

#2: Two babies are born with very rare gifts. Both are taken to a facility for people with special gifts. They are tested constantly, treated like animals. The two babies grow up together. Then one day, they escape, using their abilities. But they must constantly keep moving, or they will be hunted down.

Mod
I like them both, but my favorite is the first...

Alright, the first idea it is then :) Do you wish to be the girl or the guy? 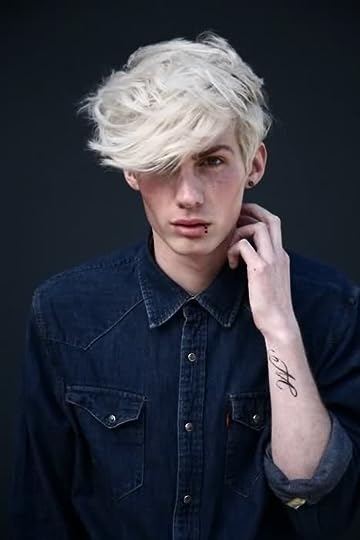 History: Gerard was born into a family of poverty. Since his parents couldn't pay the medical bills, he was given up for adoption so that they could work to pay off the bill. He was adopted when he was three. The family who adopted him are fairly wealthy and treat him like a prince. At first, Gerard enjoyed the attention, but now, it's just getting really old. He would rather be treated like a regular person, not like a god.

Personality: Shay is a very outgoing creative soul. Shay is an outgoing girl who expresses how she feels through art and creating things. She is not afraid to be who she truly is even though a lot of times people find it strange and unusual. People find shay annoying because she had a lot of spunk and a fun personailty. She loves thinking outside of the box, and is a very nice girl. She may seem loud and obnoxious but once you get to know her, she really is fun, nice, and even a little bit insecure.
Likes: Poetry, Music, Drawling, Singing, Painting, Art, Animals, Dancing, Painting, Creating Things with her Hands
Dislikes: Negative Attitudes, Animal Abuse, Being Teased for who she is, Being Someone you're not, When People are Afraid to be who They Truly are

Family/History: Shay was born into a small family. Her father was an only child like her, and her mother has one sister who lives with them. Shay's mother Richelle works as a waitress at night, and school teacher by day, her mother is a happy, loving soul who loves children and helping others. Her father Damon is a mechanic and owns his own body shop. Her family is hard working and feel that they deserve everything they have. Shay is an only child though her parents love kids, as she grew older she wished for another sibling to keep her company, though her parents could never make that happen again because her mother got cancer and couldn't have any more children. Shay was sad and bummed out but she was thankful for what she had. Her parents eventually adopted her younger 12 year old sister who is in 7th grade.
Shay enjoys spending time with her family, especially her sister. She tries so hard to be a good role-model for her sister. Shay suffers from depression though, she has ever since she was around 14 years old. It was something that developed as some sort of sickness and brain malfunction by doctors, though Shay was a happy child. Shay in 8th grade had lost one of her best friends, it's a long story but basically this friend left Shay for another group of friends and was really mean to Shay. That was when Shay's depression started and from there it developed into other things. Often times Shay gets picked on by classmates, and by the 'old best friend' which causes her to drink secretly, and cut herself.

Other: Shay is a great advice giver, and will listen to anything you tell her, and try to help you solve the problem.

Mod
Is that ok, and I like your charrie by the way.

That's great! And thank you :)

So, would you like to start, or shall I?

Opening his locker, Gerard pulled out his writing notebook for sixth period. He flipped through the pages, skimming through his writing. He frowned slightly and shoved the notebook into his bag. He felt a sharp tap on his shoulder and turned around. He sighed softly, pulling his little freshman sister in for a hug. She looked terrible. "What did he do now?" he whispered in her ear.

Shakily, she answered, "He tried to punch me..."

Gerard frowned and gently pulled away, looking down at her. "I'll take care of him. Don't you worry."

She nodded slowly and gave him one last hug before running off. Gerard watched her with worry in his expression.

Mod
Shay was walking through the hallway with her her earphones in listening to her music. She had one earphone in her hand and the other in her ear. She saw a friend in the hallway near Gerard,"Hey!"she said with a cheery smile. She went to give her friend a hug when someone passed in the hallways saying, "Lesbian Alert!" Shay stepped back and rolled her eyes looking at her friend with a soft smile,"Ignire it."