Academy For The ~ֆʊ℘ҿɽɳɐƫuɽɐƪ~ discussion

7 views
Inside The Academy > Greenhouse 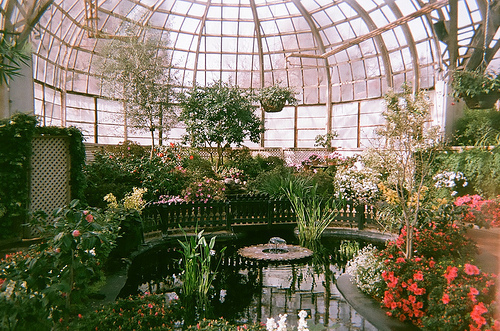 ((By the by Sea, out of curiosity have you had any interactions between your Demon and other characters yet?))

After the mayhem she'd seen in the main courtyard, she bolted. It had been too much for Azalea to handle and seeing Leigh treated that way had been sickening. She slipped into the darkened greenhouse and took off her heels. With one hand grasping her footwear, she walked on one side of the white pebbled path. She brushed her spare hand over the leaves of the shadowed plants.

The soft trickle of water let her know that there was an ornamental pond around somewhere. She'd have to find it later. But as the moon came out from behind the clouds, the pale light filtered through the glass and hit a white gazebo. It looked enormous in the ghostly light and little Miss March went straight towards it.

Plush cushions lined the seats within and she sighed softly as she put her shoes neatly at the gazebo entrance. This would probably be the safest place to be for the night, for her anyhow. So as she curled her legs up underneath her, she stretched a bit.
"Poor Leigh...but it'd be better to stay here for now and let everything blow over."

Harper entered the greenhouse, needing a place to think

Azalea was almost asleep when the feeling in the greenhouse shifted. The nearest flowering plants whispering that there was another that had entered their home. The fairy stirred, her glamour falling away in her moment of vulnerability before it shimmered back into place.
"Hello?" She asked with a soft yawn, eyes straining a little as the moon was once again covered in cloud.

Harper immediately felt at peace upon entering the greenhouse. Being around nature made her feel so at home. Suddenly, she heard some call out. "Hi," she quietly called back

Azalea uncurled herself from the seat and placed her feet on the ground. The moon reappeared and she stood in the entrance archway. She was bathed in silvery light and she searched out the other person with cool coloured eyes.
"Did you come here to relax after the courtyard?" She asked a little louder, trying to help the person find her more easily.

"Yes," harper admitted, "it was kind of crazyin there"

"My name's Azalea...I just moved in with Leigh and Topaz tonight." She said, playing with the end of her braid a little. "It was crazy indeed...I think I'll stay here for the night to avoid any more craziness. What about you?"

(no problem it was like 1 am where I live))
Harper smiled, "I'd love to stay here, if that's alright with you. I'm an elemental, so this place kinda feels like home for me"

Azalea nodded and motioned for Harper to come into the gazebo, "That's perfectly alright with me and I know what you mean. I grew up in a rainforest so any plant life is welcomed, I'm a fairy...well, a subspecies of fairy anyhow."

((omg no way! Where do you live?))
"Wow" Harper gushed, "That's incredible! This is my first time out of the house...but we had a greenhouse and I spent a lot of time there," she dragged a finger along a row of plants and they blossomed

(I live in Australia lol)

"It was incredible," Azalea enthused as she watched the other girl make a row of flowers bloom. "If you ever visit Australia once school's over....swing by the Daintree Rainforest and I'll show you my home." The young fairy watched curiously before she dropped her glamour. White petal shaped wings appeared as the magic faded and she fluttered them.

((ohmygod that's so cool!!))
Harper grinned, "That would be wonderful, if my family lets me. And those are beautiful!" she said, indicating to Azalea's wings, "I've always wanted to fly"

Azalea yawned and curled up, after a busy day in class she just wanted to rest. Her tattered blue dress settling around her knees as she pulled out her braid, flowers falling out all around her.
"Ahh...what a day." She sighed, settling down for the long haul.