I read The Awakening today, finished within a couple of hours as it's quite short - 173 pages on kindle.

I have mixed feeling about it, as I liked the general story, although it took a while to get going. I also really enjoyed some of the passages, getting immersed in the writing, though on the whole there were many disjointed paragraphs, that left me feeling like I'd missed something.

Has anyone else read this yet, or planning to pick it up this month?

Hated it. After reading the first 40 pages I gave up, as I consider it a bad sign when I dread the thought of picking up a book to continue reading it.

I also had mixed feelings about this when I read it a few years ago. I thought the idea of Edna trying to find herself and some independence from the family life she had submerged herself in was good. But I didn't like the way she found her "freedom". If she wanted independence then why did she seek to become involved with another man so quickly? It just reinforced the idea that a woman needs a man to be happy. (view spoiler)[And for her to freak out and drown herself because he left her was beyond ridiculous. She didn't find independence at all, she just wanted someone fresh to attach herself to. Killing yourself over a man's choice to leave you seems about the least empowering thing you can do. (hide spoiler)]

I'm nearly done with it, but I am enjoying it well enough so far. I feel like the story is about becoming who we are rather than who we are expected to be.

Just curious, should we use spoiler tags? I'm nearly done with it, but I'm not quite to the point where the main character of the story (view spoiler)[commits suicide (hide spoiler)], so that was a bit of a surprise...

I've read "The Awakening" twice and I find it to be a hauntingly passionate read. In the time that the story was written it was not considered that a woman have feelings, ideas, or interests in becoming a more fullfilled person. She was to marry, raise children and cater to her husbands needs. I don't think she was weak to have ended her life as she did, she realized that her independence was never to be found. And as far as becoming involved in another relationship, how wonderful it must have felt for her to have emotions and feelings once again stir inside her.Having read this book makes me feel so fortunate that women are finally able to stand up with a strong voice. We have a long way to go but I am thankful,as well as saddened, for all the women who have gone before me.

Jennifer wrote: "I've read "The Awakening" twice and I find it to be a hauntingly passionate read. In the time that the story was written it was not considered that a woman have feelings, ideas, or interests in be..."

I agree with this. I also found parallels with Madame Bovary, as they both involve a married woman's dissatisfaction with married life and her seeking another way.

I didn't particularly like the ending, but did not see that coming! Also perhaps as Jim suggested we should use spoiler tags in the future for those people who haven't yet finished.

Me and my big mouth! Sorry for forgetting the spoiler tags, what a bummer.

Stephanie wrote: "I also had mixed feelings about this when I read it a few years ago. I thought the idea of Edna trying to find herself and some independence from the family life she had submerged herself in was go..."

I so agree with you, Stephanie. I read this book about five years ago and had the same reaction. I have been wanting to re-read it for sometime now and will be starting today. I do remember it was well written though.

Stephanie wrote: "Me and my big mouth! Sorry for forgetting the spoiler tags, what a bummer."

This was an interesting story - while the story itself was a bit slow, I thought that it had wonderful themes...

I think it's about becoming who we are, rather than who we are expected to be. It's still something that too many of us struggle with now (male and female).


He could see plainly that she was not herself. That is, he could see that she was becoming herself and daily casting aside that fictitious self which we assume like a garment with which to appear before the world.


I think I agree with Jennifer:

Jennifer wrote: "I don't think she was weak (view spoiler)[to have ended her life as she did, she realized that her independence was never to be found. (hide spoiler)]"

I thought that there was more hope in the story than some of the other readers did. Even though she (view spoiler)[ultimately decides to end her own life, is there hope in this story in that she has the courage to make this choice because she is not going to be confined to who society says she will be? (hide spoiler)] I don't know; maybe I'm reading into it.


But the beginning of things, of a world especially, is necessarily vague, tangled, chaotic, and exceedingly disturbing. How few of us ever emerge from such beginning? How many souls perish in it's tumult?

I had very mixed reactions to this. I had to read it twice. The first time through I was there with Gayle. The long interminable descriptions of her going for a swim, lying in a hammock, and taking a nap (for hours and hours) just drove me crazy. I kept wondering when on earth something was going to happen! But then somehow, something grabbed me and I raced through the final third. And was left totally confused by the ending. She did what?! And then I was left with Stephanie's reaction. What kind of freedom is this?! Only I realized I just hadn't done it justice, so I decided to read it again more carefully (and thoughtfully). I decided it really did deserve at least that much effort from me, if only for its historical position in the canon of female literature.

The second time around was a completely different experience. Now that I knew where they were going, those long descriptions in the beginning took on a completely different aspect. Edna's gradual realization of her value as a human being became much more important. (And I actually noticed a lot of sly humor in there as well.)

And I have to completely disagree with you, Stephanie, as to the cause of her final action. It all comes down to what her friend said, "Think of the children." While she was disappointed by Robert's choice, she also realizes that (view spoiler)[ she would have eventually grown tired of him herself "she even realized that the day would come when he, too, and the thought of him would melt out of her existence, leaving her alone." Not that he would leave her, but that she would stop caring about him. This is, to me, the key sentence, "Today it is Arobin; tomorrow it will be some one else. It makes no difference to me, it doesn't matter about Leonce Pontellier - but Raoul and Etienne!" She has decided that the life she wants and needs to live will include casual relationships to satisfy the sensuality she has just discovered within herself. She is not willing to "not" live that life. But on the other hand, to live that life, in that society, would have created a scandal that would have seriously harmed her children. She will not sacrifice that deepest, most essential part of herself, even for her children, so instead she sacrifices her life. (hide spoiler)]

And the sheer outrageousness of it is amazing. It's one thing to have a married woman fall in love with another (younger) man, but then to have her simultaneously (view spoiler)[engaging in a casual sexual relationship with a third man she cares absolutely nothing about! (hide spoiler)] That's groundbreaking stuff!

I hadn't thought of it that way Alexa! We're going to have to agree to disagree though, because I still think the reasons for her (view spoiler)[suicide were unjust. If she had decided to drown herself because of her failed relationships with men I would be thoroughly unimpressed. But I am equally unimpressed if her actions were due to her wanting to protect her children's reputations. Is it fair for a woman to sacrifice themselves totally for the comfort of her children? When a woman becomes a mother is her life forfeit? Is she not able to do what she desires to anymore because she must constantly be thinking of her children? I struggle with this concept. Full disclosure; I don't have children and for most of my life I have not wanted them, so likely I don't fully understand the emotions involved in motherhood. But I do think it's unfair for a woman to be so concerned about society judging her actions that she'd be willing to end her life to prevent her private and personal actions from affecting public opinion of her children. It just seems so drastic! Is she not still a human being herself? (hide spoiler)]

Maybe I should give it a second read too, it's been a while and I'm just going on what I remembered. I certainly agree that the novel broke a lot of taboos by writing about a woman having an affair with a younger man, as well as (view spoiler)[a third man she was emotionally unattached to. (hide spoiler)] THAT I can get behind! Hahaha. I think I will always be overly judgmental of her actions at the end though. I'm a jerk like that sometimes. 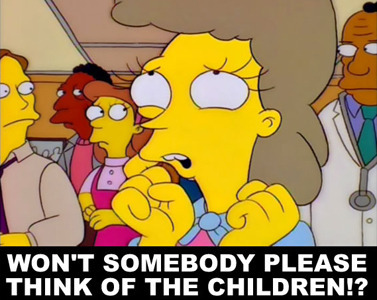 Oh, I never meant to imply that I approved of her decision, just that by looking at it that way it made more sense in terms of the person she was becoming. She would say it was exactly because she was NOT willing to sacrifice herself. I also think there are supposed to be some clear mental issues going on - the recurring despondency she suffers from. I also think it was very much a last minute impulse (just moments before she had been making a special request for fish at lunch.)

Yikes! Is it possible the Simpsons was quoting Kate Chopin? And if so was it possible they were making the same ironic comment on Edna's actions? Because realistically, how could she possibly think her children were better off by her (view spoiler)[committing suicide? (hide spoiler)]

In the end, no I don't think motherhood is about becoming a martyr (in any sense of the word). Motherhood should be about a whole new, deeply fulfilling mutual relationship; which, like any relationship, has its responsibilities, but which is meant to be, at its deepest level, joyful and satisfying - and something no one should ever feel obligated to enter into if they aren't interested. (And now I'll get off my soapbox, sorry!)

The Simpsons reference every one and everything so it's very possible! Ha!

I'm glad to hear you say that motherhood is not about becoming a martyr. It's surprising how many women think it is! You should still retain some kind of life for yourself...

The Awakening (other topics)