This topic is about Sprout
26 views
Young Adult Discussions > Sprout, by Dale Peck

I sat with a longtime acquaintance on the train the other day; he handles YA novels for a major publisher. When I brought up a couple of my favorite YA authors (both reviewed here)who focus on gay teens, he dismissed gay books as "usually bad." A gay man dismissing gay-themed YA books as bad--without actually knowing either of the authors' work. I could have slugged him. But he's otherwise a nice guy, so I let it pass.

Having just finished Dale Peck's "Sprout," recommended to me by a friend on AfterElton's gay lit forum, I'm thinking I should have slugged my friend after all.

Before starting to write this, I read the worst reviews of "Sprout" on Amazon. I see why those reviewers were displeased, but I hasten to say they missed the point. "Sprout" is a double-edged (or, perhaps, two-sided) story. It starts out surprisingly light-hearted, and laugh-out-loud funny. It takes a very unhappy subject and turns it into a picaresque adventure of a broken man and his confused and damaged son setting off to create a new life. Or, possibly, the story of a budding novelist who is helped to discover his talent by a quirky and damaged midwestern school teacher.

But, as one complaining reviewer wrote, midway through the book things take a darker turn, and the emotional pain beneath the laughter comes rising to the surface. And with it comes love, which in turn reveals more pain. But far from putting me off, this shift in tone simply pulled me into Daniel Bradford's world more fully. It helped me understand that the strength this boy was showing was real, but also that it masked wounds that had scarred over without healing. The pain at the end of the story, which left me weeping and exhilarated at the same time, shows us that Sprout is going to be fine; that he will, after all, heal. It is not just the story of a man emerging from the hurting soul of a boy; but the emergence of a writer with a story to tell and the experience to bring it to life.

Peck's writing is very good, beautiful in many places. There is nothing non-adult about this book, nothing that a sophisticated grown-up reader wouldn't enjoy. Unless of course, he just dislikes kids. I have two teenagers, so how could I help but love this?

Mod
I had reviewed this on another book board a while back, when I first read it, so I'll go ahead and re-post that old review here:

Sprout Bradford has a secret. It’s not what you think—he’ll tell you he’s gay. He’ll tell you about his dad’s drinking and his mother’s death. The green fingerprints everywhere tell you when he last dyed his hair. But neither the reader nor Sprout are prepared for what happens when Sprout suddenly finds he’s had a more profound effect on the lives around him than he ever thought possible. Sprout is both hilarious and gripping; a story of one boy at odds with the expected.

The story is written in a loose stream-of-consciousness style, with many asides, that put me off a bit at first. But once I got a chapter or two into the story, it all seemed quite natural to me and I found myself liking Sprout (Daniel). He’s an extremely intelligent and articulate kid with a unique way of looking at and describing the world, and one with a quirky sense of humour. The reader can't help but feel that he’s adjusted very well to the lousy hand life has dealt him.

The early part of the novel is told in flashback, going back four years previous. We begin with a headlong flight from Long Island; after the death of Sprout’s mother his father had a complete break-down and simply loaded up a van and drove west until they finally ended up in the middle of nowhere, Kansas. The father’s descent into alcoholism and complete irresponsibility (and occasional seeming insanity) is told in a light-hearted way; he sometimes comes across as the jovial, eccentric, genial drunk. Though, when I really started to think about it and look past the gloss, I found myself disliking the character of the father more and more as the book progressed. No doubt about it, he was a TERRIBLE parent and as far as I’m concerned his actions, while understandable perhaps, were also inexcusable when he had a child to look after.

However, this really is not a doom-and-gloom novel. We zip forward to the present---Sprout is now sixteen---and along the way we get to learn a lot about his friends and teachers and life in and out of school. It’s all quite funny, really----the protagonist has such a way with words when talking about his life. And the story really takes off when he befriends Ty, a local boy who has things much worse; their friendship is at the heart of the book and leads to a rather shattering climax. And near the end, we finally begin to sense what Sprout is feeling beyond the flippant exterior, and find out that his unconventional home life and the disintegration of his family has really affected him much more deeply than the reader has first supposed.

The end of the story is both uplifting and heartbreaking---I know it made quite an impression on me. In fact, a few nights ago (when I was half-way through the book) I had intended to read just a couple of chapters before bed, and ended up reading the second half all in one sitting, finally finishing very late into the night. And afterwards I just lay there in the dark, thinking about the story, until I finally figured well, this is no good, I’m never going to get to sleep now. So I got up, went and did some work for several hours until the sun was well up in the sky, and I finally collapsed because I couldn’t keep my eyes open another minute. Not many books cause me to react in this way!

The book is a stand-alone, but if ever a novel warranted a sequel this is it. I’d like to see the story continued, but written from Ty’s point of view. I really do want to know what happened next! I wonder if I wrote the author and begged him to do another book, if he’d listen…. Ha!

This is quite unlike the majority of YA novels I read, and I can’t say how anyone else may react to it, but I certainly do recommend it. 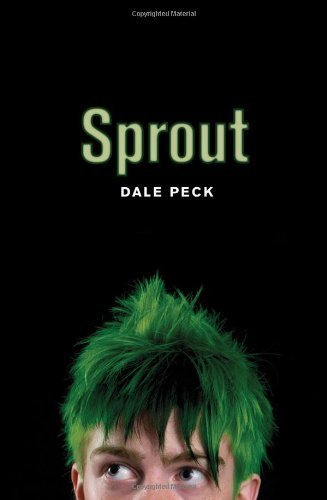 I was in the minority on this. I read YA books as just that, and Mr. Peck came off as writing down to his audience. As an adult I liked the book, but I know many, many teens who DNF'd it before 30%. I enjoyed his humor, and felt some of his reactions fit his age, while others didn't.