Upon first meeting Camille, it isn't uncommon for strangers to be left with a single word dangling at the front of their conscious; promiscuous. Whilst it isn't false that the young lady indulges in frequent carnal acts for sheer pleasure, she thinks of herself more than just a warm body. Her confidence tends to ooze out with every word she speaks; flirting, yelling, fighting, scolding, all of it is done without the afterthought of having spoken the wrong thing. This way to go about things might make her come off as 'bitchy', but Cam's intentions are not to hurt another's soul, though it's rare you'll find her apologise when she realises that she did, in fact, offend someone.

One quality that usually doesn't rise to the surface right away is her capability to always be open to all of the options (how do you think she makes big bucks every night?). Never will she turn down the opportunity to try something new, no matter the risk, and, worst comes to worst, the cost. Her general knowledge is quite vast, making her an easy social butterfly amongst all crowds. Being an extrovert, the blonde does not enjoy being alone; at all. Phone conversations are usually on-sided for her chattiness will more than likely wallow up 55 minutes of your hour long conversation. Hardly able to sleep without a warm body next her, it's one of the main reasons she's hanging around bars or clubs (thank you fake identity).

Lastly, many underestimate her intellectual capacities simply because she doesn't wear a 'mysterious' mask. On the contrary, she is easily read, thus giving others the impression that they are on a higher level of general acumen than she. A false presumption, surely.

Born and raised in Leeds, England, not much went on during the first few years of her life. She was a content, happy child whom was always on the lookout for any sort of adventures. Once preschool came around, the blonde toddler always had friend flocked around her as she'd be talking about whatever it was four year old children found interesting at the time. It continued on like this up until the sixth grade, when it was discovered that Emma, Camille's mother, was with child; a baby boy. Coincidentally, her father had been offered a job only a fool would decline; there was only one problem, the employment was in America. Forced to leave her peers behind, the family of three and half flew out to the nation which Cam had never wanted to go to.

A few days after their move, it was back to school she went, finishing her sixth grade and graduating from elementary with kids whom were much too preoccupied with past memories to include her in their small party. Junior high was a struggle, what with puberty and a sudden wonder as to what society perceived her as. Was her hair long enough? Her face pretty? Her hips molded? These thoughts soon pushed Camille into the obsessive phase of her life. Makeup became her best friend, as did fashion upon discovering the model industry and what it had to offer. Using her rather large sum of allowance, she began collecting handbags, headbands, shoes, skirts, dresses, anything that was 'in'. Somehow, through her adolescent descent, Camille managed to keep her grades relatively average. Though the report cards began dropping once 16 came along.

The age when boys -- men -- began to take notice of the blonde whom, by now, had already evoluted into the young woman she felt she was becoming. At first, it was the senior students flirting with her, which was any girl's dream back in highschool. In fact, she dated one of them up until he graduated.

Cam became single once more, and it just wasn't the same. She needed to be with someone; once one experienced the joy of being kissed and held, having no one simply wasn't something she'd settle for. And so began the dating frenzy, which earned her the notorious title of 'slut'. The name stuck with her until she graduated, and, surprisingly, she didn't mind it.

A year has gone by since graduation, and if ever you are ever wanting to hear crazy stories, Camille is the one you are seeking.

(view spoiler)[Got frustrated near the end, so I just crammed everything like the lazyass I am. BUT, I managed to cram it all in a single page - which is what matters. xD (hide spoiler)] 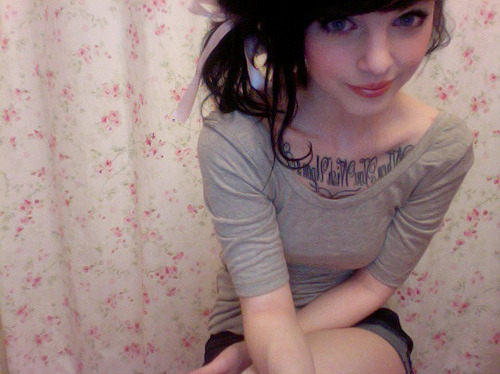 she fucking sucks, i know. but i'm so lazy and have some replies to get to. :P if camille hadn't been pre-made, i would've done the same thing. oops.

Eeeyy, were you still interested in this or not? Don't feel bad if you're not! I'm just going around and deleting my roleplays which have died. :]