(▫▣▫Iᴍᴘᴏʀᴛᴀɴᴛ sᴛᴜғғ▫▣▫)
His name is Conner James Kapowski, suggested to his parents by the loss of his mother's brother when she was 7. The middle name coming from his father's first and his step-father's surname, to his own dismay. He is called Conny by his little sister, Val, even though she's 16 now, she will still call him that when she scared or wants to annoy him. He is Seventeen years old. He was born on May, 14th, he was born in Junction, North Dakota. He is Currently Single. He is a Heterosexual. His past Relationships don't mean anything to him. Conner is skilled at playing the drums and he does so now professionally. His best friend is Jesse Parker, though most people know him by his musician name, Jesse-James. Conner ended up "copying" him in a sense since they both used the names they created in the tree house. Conner Richards, which had to due with him using his mothers last name, verses his step father's surname. His father died when he was 4 during 9/11. His mother re-marring a man, he counts as a father now.

( ☛ʜᴀɪʀ- Conner has brown hair with a hint of blonde. Conner got his hair fro his dads mum, Kelly. When Conner was a baby his hair was more blonde then brown but now its the other way around. Conner's hair his very short compared to when he was a kid he had his hair almost to his solders. Conner liked his hair like that then his mum took him to get his hair cut.
( ☛ ᴇʏᴇ ᴄᴏʟᴏʀ- Conner has blue eyes that change into grey, and green. Most people ask him what color he says blue but really there more of a hazel type. His eyes sparkle in the sun. Conner has bad eye sight. He has to wear contacts and hates it, ever since he was in 5th grade. Conner's eye sigh has doubled in the last year, which is not good.
( ☛ ʜᴇɪɢʜᴛ- Conner is very tall, he's 6'3. Conner's dad, and mum are very tall to that's where he gets it from. Conner's Mum, is 6'0 and his dad was 7'3. Conner likes being tall he gets to go on all the ride in theme parks, yep that his favorite part. Conner doesn't really think about his height because the people around his are pretty tall.
( ☛ Sᴋɪɴ - Conner is very pale. Conner burns it. ns easily in the sun, every time he tries to get a tan he gets sunburn and hates it. His friend Jesse often calls him a vampire because he's so pale. Conner does not like tattoos, he never has and never will he just thinks they will rune his body.


{ɢᴇɴᴇʀᴀʟ sᴛʏʟᴇ}
Favorite piece of clothing: Conner has a , He has a favorite hat. He cannot live without his hat, his dad gave it to him one year and loved it. It is a red beanie just a plain red beanie.(Like the one below) 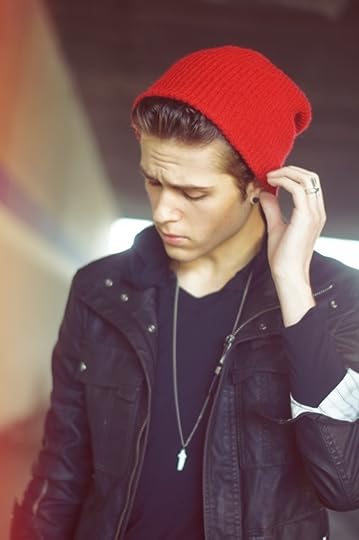 
(ღ ᴘᴇʀsᴏɴᴀ ღ)
( ☛ ʟᴏᴠᴇs ᴍᴏsᴛ ↴
Conner loves his stuffed monkey the most it has always been there with him much like Jesse. Conner got his stuffed monkey when he was, 3, and has been with it ever since. Though he does try and hide it from people when they come over, due to the fact that it isn't that manly. And honestly he's afraid most will laugh, well most due laugh so he does have a good reason for it.
( ☛ ʜᴀᴛᴇs ᴍᴏsᴛ ↴
He hates bracelet making. Most people don't get it but as a kid It was the only thing he was good at, and his mum made him do it. The difference was that he didn't actually like doing it. It was a girly thing that guys weren't supposed to do, that and having them was pointless, guys can't wear damn bracelets. The work was much too tiring and it's actually left him a bit scared.
( ☛ ʙɪɢɢᴇsᴛ ғᴇᴀʀ ↴
His biggest fear is spiders. This fear first occurred when he, Jesse and Melody were playing hide in seek with a couple other kids. Conner had been running to find a good spot and the dried out vine covered well seemed fine. When 10 had struck. Conner had jumped in, not knowing the quick area of ground he saw wasn't actually there as he tumbled a bit into it's slight slope. Spiders clawed around and for the couple hours he spent down there with a broken ankle, he only felt that he was surrounded but it.
( ☛ ʙɪɢɢᴇsᴛ ғᴀᴜʟᴛ ↴
He's biggest fault it that he can't hear very well. He is half deaf. He can barely hear people when they speak at times. This causes him to miss out on opportunities, and end up making people mad at him due to his lack of 'listening'. It wasn't till later in life when his mother took the idea seriously and sent him to the doctors where they realized just how bad it was. The boy had been slowly losing his hearing A reason that for a while the drums where just so much easier to play.
( ☛ sᴛʀᴇɴɢʜᴛs ↴
Conner is really good at playing drums, he's been doing this since he could remember. Often times it was because he could feel the music as he played. The vibrations easier to understand than just regular words alone.
( ☛ ᴡᴇᴀᴋɴᴇssᴇs ↴
One Weakness Conner is very bad at Guitar playing. He is trying to learn how to play, but is very bad at it. He is trying to get better. And when I say bad I mean bad. He simply can't catch a grip when it comes to guitars. Though most people just go and assume he plays that over the drums, which forces them to force him to 'play them a song' usually they all regret the event and as Conner is blushing they laugh it off like it's nothing.

(ღ ᴛᴀʟᴇɴᴛ ღ)
( ☛ sᴘᴏʀᴛ ↴
He doesn't actually have a sport that he plays, just really this big mixture of him trying things. However if he did have something it'd probably be basketball. Then again he really just counts the drums as his sport, music perhaps if he ever got around to making it sound just right.

-ʟᴇᴠᴇʟ ᴏғ ᴄᴏᴍᴘᴇᴛɪᴛɪᴠʟʏ- Conner is not that competive he just plays games for fun not to beat People.


-ʜᴏʙʙɪᴇs- Conner enjoys, writing song, and playing drums. He thinks it is a amazing, and enjoys singing and dancing too.

{ᴘᴇʀsᴏɴᴀʟɪᴛʏ} Conner is very nice and smart. He is the boy every mother wants there daughter to date, But he doesn't like that. Conner wants to be the bad boy the boy all the girls want, like his best-friend, Jesse. Conner is very witty he can think of any plan, to get out of any situation. Conner is extremely funny he can make any person laugh even when there down. Conner is also very bad at remembering stuff, like bands, He use to called One Direction, Direction Five, he doesn't know why, it doesn't even make sense, or he would call them the British dudes. Conner is bad at hear things, he is deaf in one of his ears, People often tell him your deaf because he can't hear them always, the doctors, are scared he is getting more and more deaf by the day. Conner didn't use to wear, head phones when he played drums, for Jesse, because he didn't think they mattered. Conner wears them every time now even at pa]practice. Conner is learning sign language because his mum doesn't want him to learn it to late. Conner is a very skilled boxer, most people don't know he kick boxes. Conner is the best in the county. Conner loves doing stuff that he's good at because it makes him feel good inside. Conner's favorite thing to do for fun is hang out with Jesse, Conner mostly has to be the mature one but he's uses to it. Conner knows he could never get use to Jesse's parties there always loud music and some neighbors call the cops, Conner is always there for Jesse.

On may 14th 1995 Conner was born. He's mom was very young but had her dad right there beside her the whole time. Conner loved his family, he had four older sisters. Until of the age of ten he wasn't the only man, in the house, but his dad died in a car crash and Conner was desisted, Conner then got therapy, because the only person that would make his feel better was Jessie. Conner started to spend a lot more time with Jesse, they were best friends. Conner always thought of himself as the responsible one, but has never said that to Jessie.