I've seen a few people introduce themselves as interested in the Elder Scrolls Online. I've been pondering which pre-order to go for myself; this morning I woke up to my first beta invite!

I know there's not much any of us can say who have played in beta, but I figure there are some things to discuss in the (less than) two months run up. Which pre-order did you go for? What alliance or race are you looking to play? Are you a PvP or PvE player? Any cool guilds forming up?

I haven't played a MMO (except for a brief flirtation with the Secret World) since early days WoW, so I hope I'm not too rusty. I've been playing ES games since Daggerfall and am still taking my sweet time with Skyrim. I'm tossing between the Aldmeri Dominion and the Daggerfall Covenant as my main alliance. I feel the need to play ALL OF THE RACES, so it's hard to settle. Personally, I focus on PvE and roleplaying in my play styles. I'm of two minds with the "play any alliance with any race" perk. It keeps with the old single player feel, since you could be any race there, and will help diversify the world, yet I hope that most people stick with lore-worthy characters. A hoard of Khajits 4 Morrowind would make me wince.

I've signed up for beta, but haven't gotten an invite yet. Waiting patiently! (or not so patiently, haha)

Yep, that's where I was until this morning. Are you thinking of pre-ordering?

I have played a lot of MMOs, but have become jaded. The games these days are not designed for immersion RP, but to kill the enemy--over and over and over again--and take their stuff.

The last great RP MMO was Age of Conan, and the game developers did everything they could to drive away role players until you only had PvP, purple-collecting, "Oh look BOOBIES!" left.

Anyway, I can hope.

I got this weekend's beta invite as well! I have been looking forward to this game release for some time now. I was an avid WoW player for many years...until they dumbed it down so much that there was no more strategy/ theorycrafting. Glad I got into the beta....this way I can see if it is something I like before shelling out the money. Can't wait till Friday!!

Shadyia wrote: "I have the beta invite for this weekend (Feb 7-10).

I have played a lot of MMOs, but have become jaded. The games these days are not designed for immersion RP, but to kill the enemy--over and over..."

if you want to play an MMO that focuses on immersive RP, I would recommend "Age of wulin". Yesterday I was painting (I have the painter profession) and the game rewarded me for doing so.

It looks like there are still codes up for grabs at curse.com for this weekend's beta play through. I can neither confirm nor deny if I was able to get one since that is confidential information under the non-disclosure agreement, but I will say I don't expect to leave the house until Monday. Thanks, all, for the heads-up!

Chris wrote:I can neither confirm nor deny if I was able to get one since that is confidential information un..."

Same here. I am not in the Beta, or else I could tell you this, but I heard that

--the game is much slower than many MMOs, which is kinda nice.

This is a picture someone gave me. I didn't take it, of course, if I did I could not share it with you: 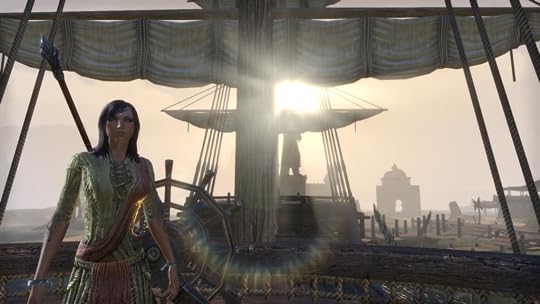 I love TESO. I know Skyrim fanatics were disapointed, but they thought Skyrim would become an MMO, which was impossible.

There have been some new changes to TESO. Like GW2, any zone you go to will adjust to your level. You can play with anyone. A level 10 can group with a level 50 because the monsters and treasure you encounter will adjust to the person attacking it. You can also go to any zone in any faction. This is wonderful! When I first started playing TESO, I had friends in different factions that forced me to re-roll characters--and then they re-rolled characters and it all became a frustrating mess. That's been solved.