Yay! :) So just a heads up, I haven't finished all six or however many seasons there are of the show. I'm only up to like, season 3 I think

Oh okay :) So you know like the basics of it, right? Who Gossip Girl is and what she does and the kinds of characters?

I know the kinda of characters. And to be clear, is Gossip Girl basically someone who sends out rumors and all of that fun drama stuff?

Awesome! SO how many characters were you thinking for each of us?

At least two, boy and girl each, but we can always make more if we want :) and you can use whatever format you'd like. The only thing is that they have to be in high school; I was thinking juniors/seniors, but it doesn't really matter too much

Nickname(s): Kate, occasionally. Her friends call her Kat or K, but most know her Lady Katherine, either mockingly or respectively. 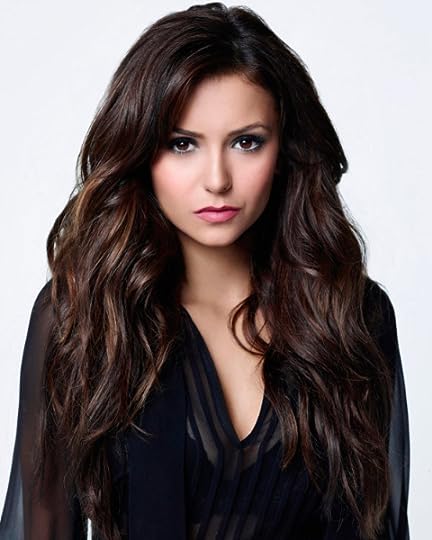 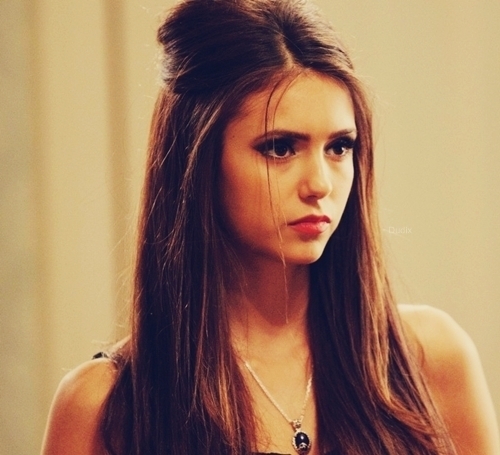 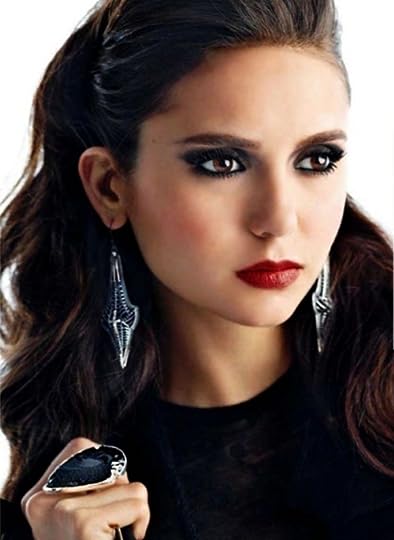 Weight/Body type: 105 lbs. Curvy; she knows she has a killer body

Hair color: Matches her eyes; she usually keeps it in long curls

Personality: Katherine is a lot of things, but to summarize pretty well, she's a bitch. She's snarky, rude, mean and selfish. Everything has to be done her way or nothing will get done. And for her entire life, no one has shown her any other options. She's ridiculously smart, cunning and devious; she will stop at nothing to seek revenge. If anyone needs a job done, they'll go to her. She's got more connections than anyone. She's ruthless, never afraid to say what's on her mind. She is the Queen B of Queen Bs, and she wouldn't have it any other way. However, her closest friends, which are only about two or three, know that she's a dark-hearted, insecure girl who just wants to be loved by someone who won't leave again.

History: Katherine knows she got her attitude from her mother, Rachelle, but she always wonders if she would have turned out a little nicer had her dad stuck around. When she was ten, he divorced her crazy mother and in the lawsuit, Rachelle got full custody. She's practically mortal enemies with her mother; they've never gotten along. But when her dad's around, it's as if Lady Katherine really becomes that: a well behaved, well mannered, genuinely sweet lady. She's grown up in her penthouse in Manhattan, and never dreams to leave it. The city is her wonderland, and she has everything and everyone under her thumb in New York.

Her mother, a designer, has always been ridiculously hard on her. She's struggled with self-image for awhile, and has a problem with anorexia. Her friends know that she's always been strict about her "diet," but no one really knows that she'll go weeks without a meal.

Family: She's an only child (from such a spoiled girl, can you expect any less?), with her mother who still lives with her, and her father, Daniel, who lives in Paris with is new wife, Heidi.

Other: She's good at everything she does practically, and though some claims it's not fair, she embraces it. Secrets are her favorite. Whatever dirt Gossip Girl thinks she has on Katherine- or anyone else for that matter, Katherine's got more secrets locked in a vault at the bottom of the sea. 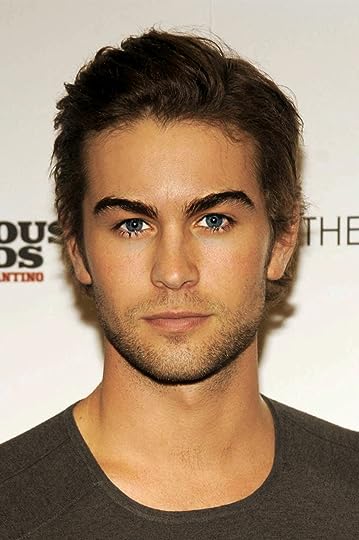 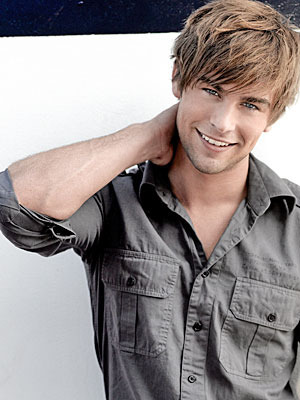 Personality: Jamie is the kid of the group. Ever since he was little he's been doing the exact opposite of whatever anyone tells him to do. He's only out to have fun; he hates school just for the reason that it's so serious. He has a crazy sense of humor and easy going attitude; he's really okay with doing whatever as long as you take the time to talk him into it (which really won't take long).

History: He's lived in the same house in the Upper East Side his entire life. Nothing's changed since the birth of his little sister, and as boring as it might sound, he's content that his parents, out of all the kids he knows, are actually still in love and not just in it for the sake of the company or money.

P.S. You don't have to use this outline if you don't want to. You can use whatever one you want. I mean, I copied and pasted these characters from previous RPs, so if you just wanna do that too, go for it :) whatever makes you happy

Name: Clarity Marie Jackson
Nickname(s): None
Age: 17
Birthdate: July 4th
Birthplace: Huntington Beach, California
Nationalities: British and Ukrainian
Personality: Clarity isn’t a horrible person. She actually has a lot going for her, she gets good grades, does community service, takes her sports seriously, and can be really sweet. She has a wild side, though. And with the right people, it shines through. She can be rebellious. Clarity is a party girl. If it’s a party she’s there. The loud music, the alcohol, hell the atmosphere turns her into a different person. In general, she’s loud. She’s always voicing her opinion, and she never leaves words unsaid. Don’t get into an argument with her, she will rip you apart. She’s a smart fighter, so it’s not often she’s outsmarted. Furthermore, Clarity can be spoiled. She wants the newest, best thing out there. And her parents usually buy it for her. She takes things, and people, for granted.
Appearance: 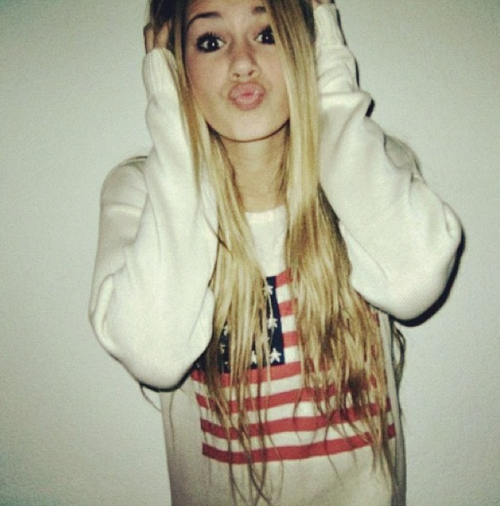 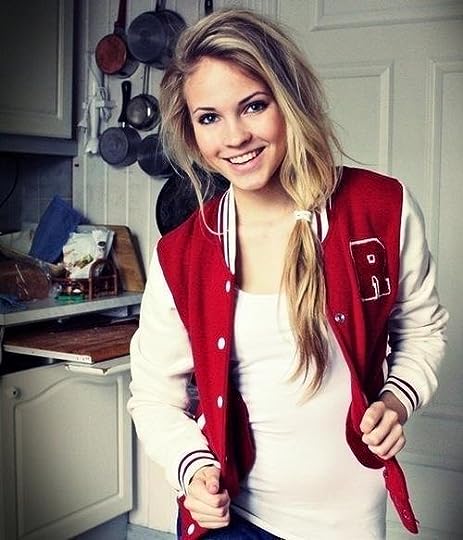 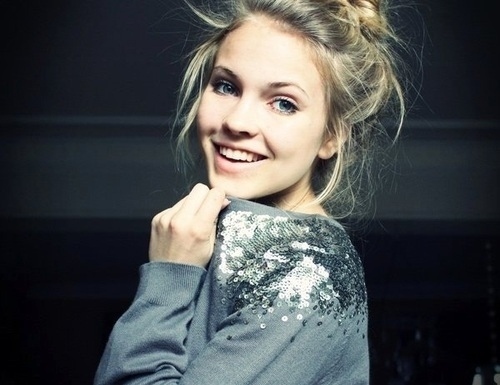 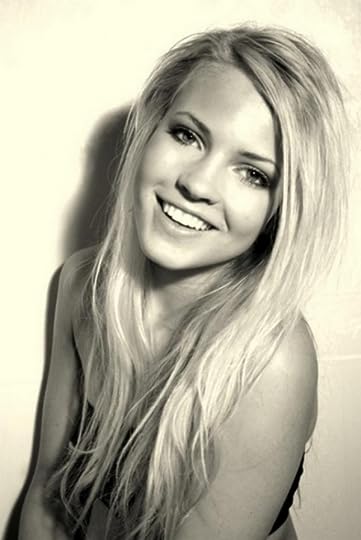 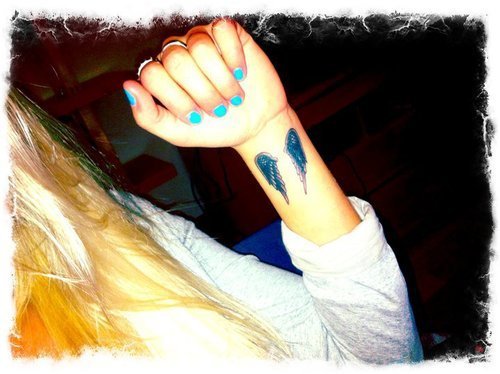 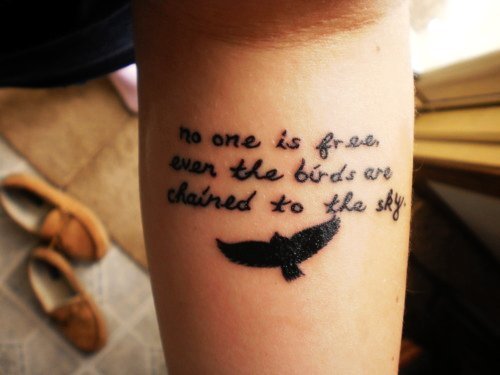 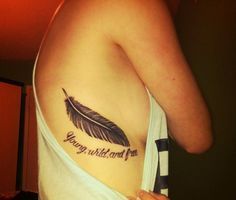 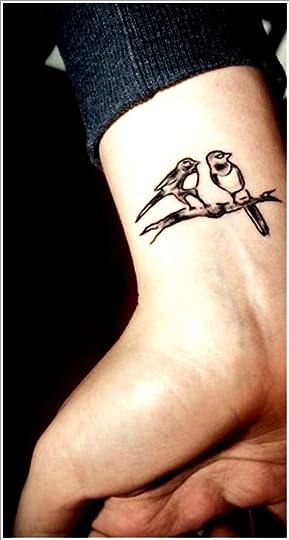 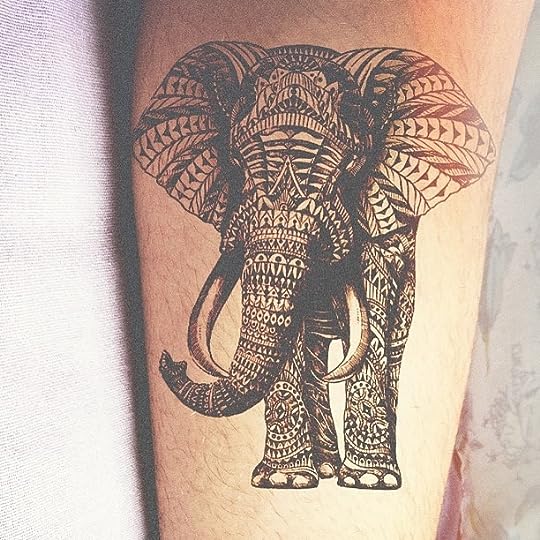 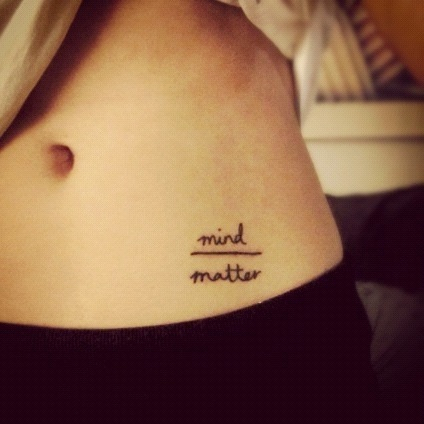 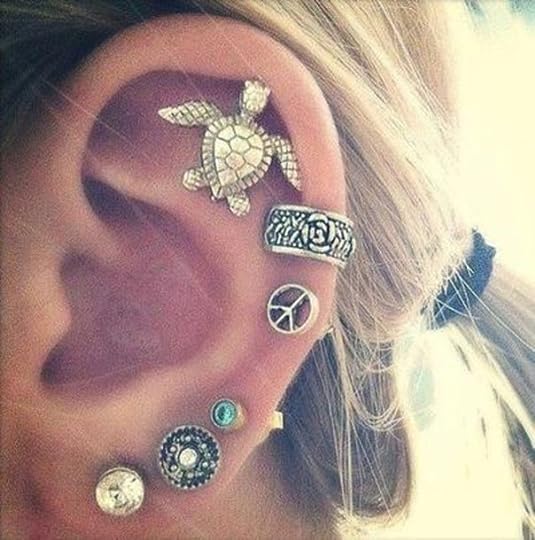 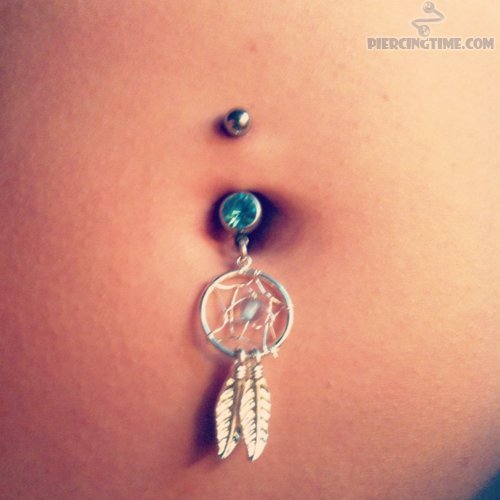 History: There really isn’t much to Clarity’s life. Nothing tragic. Probably the worst thing that’s happened to her, is her mom being diagnosed with breast cancer in 2008. But her mother was a fighter, and managed to conquer her disease. Clarity lives a very privileged, her rich parents paying everything and giving her the best possible life they can. They moved to New York when Clarity was about ten. Clarity also has a younger sister and brother, who are twins; Alaina and Grayson. They will be turning 12 later in the year. They live just outside the city, it’s about a five minute walk to get back into the city, so Clarity can live closer to her horse. Yes, she threw a big enough tantrum so she could live within walker distance of her horse.
Family:
Mum: Lilly Jackson, 40
Dad: Ian Jackson, 42
Younger Sister: Alaina, 11
Younger Brother: Grayson, 11
Pets:
Yellow Lab: Angel, 8
Bunny: Oreo, 6
Bird: Chip, 3 months
Horse: Dutch, 8 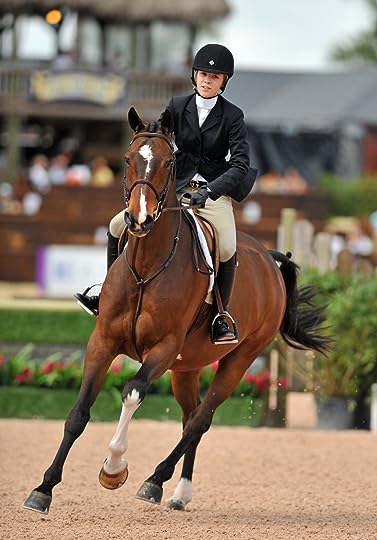 (hide spoiler)]
Other: Fluent in Ukrainian
Her car: (view spoiler)[ 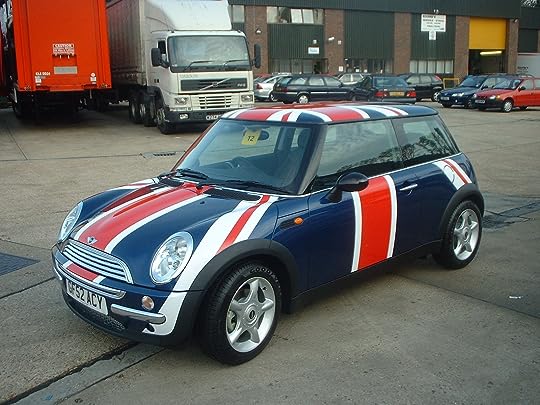 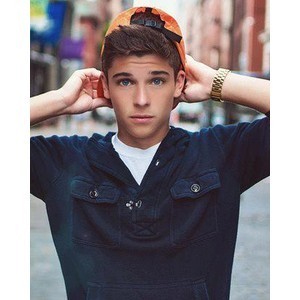 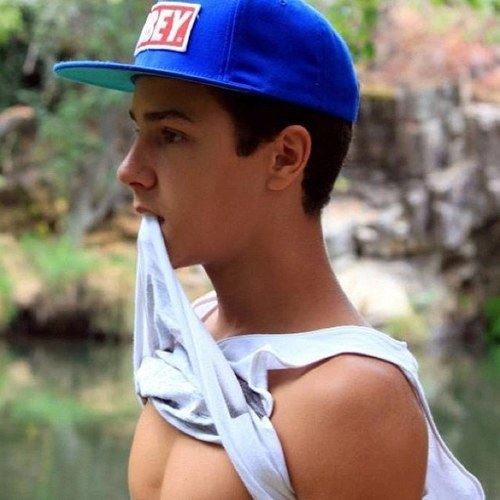 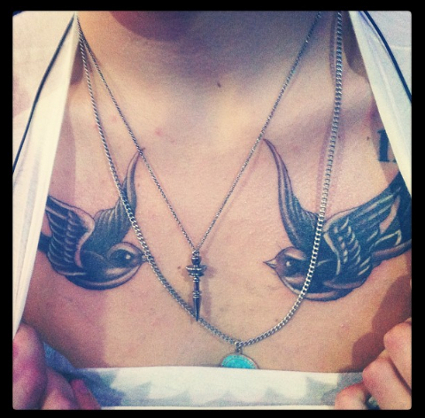 Personality: Fisher can be a bit of a jackass. When he's with his friends, he's a lot better about it, but if you're a stranger it can be almost guaranteed Fisher won't make a good impression. If you're his friend he will be more than happy to talk to you. And sometimes, he may not shut up. Fisher is fairly sarcastic and a bit of a pervert. But in a funny way. For the most part. Fisher suffers, well not really suffers, from mild ADHD. He's got more energy than he knows what to do with. He's always looking for ways to blow off steam. He's very loud and outgoing, he's a self-assured guy to say the least. If it's a party, Fisher will be there. He likes drinking beer and he likes having fun. Fisher is an athletic guy, and he's one of those people that when they try a sport they're pretty good at it. Of course, football has been his sport since he’s moved here.

History: Fisher doesn't know who his father is. Hell, Fisher’s mum doesn't know who his father is. His mum was quite a slut. She was 15, yes only 15, when she had Fisher. She wanted an abortion, but Fisher’s grandmother wouldn't allow that. So baby Fisher was raised by a wild teenager who would rather have sex with a stranger than have a night in with her baby. Fisher was simply a burden. He continued to be a burden even as he grew up. She would never tell him, but she’s always had some resentment towards the kid who ruined her life. They left Ireland was Fisher was 11 when they moved to New York. Here, his mum met a rich guy who’s been providing them a very comfortable lifestyle. 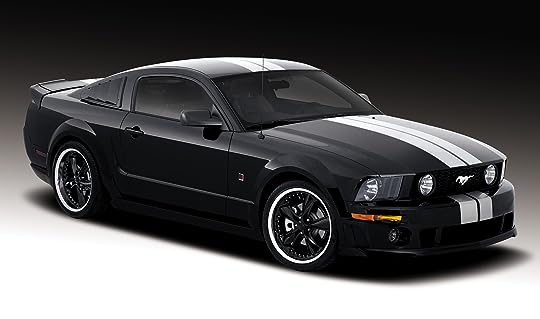 Oh my God, I love your characters! Are you ready to start? I can make the first post if you'd like :)

Thanks! I love yours! I'm really excited for this :P and sure, that'd be great. I'm going to be pretty busy this weekend, but I'll try to set aside some time to reply. Horse shows, I love them but they take up so much time lol

That sounds like fun :)) I know what you mean. I've got a 3+ hour dance class, and I've got a sprained ankle, so it'll be a long Saturday lol

Is it okay if they're all friends? Or did we already plan on that?

Dance sounds fun(: I used to dance way back in the day lol.

And yep! Having them be friends would be good (:

Sweet :) Also, I just want to make sure that we're clear on the Gossip Girl updates. So the way I'll do it is put the whole thing in italics, and either one of us can send out a blast or an update when we see fit :) I'll start us off with one just so you see what I mean

Rise and shine, Upper East Siders, Gossip Girl here, as if you don't already know who I am. It's your first day back to school, and I know just how thrilled we all are. It's senior year for my four favorites. Last time we checked at the beginning of summer, Lady Katherine still held the throne with her right-hand-girl, Clarity, and Fisher and Jameson were still causing as much trouble as possible. Let's make this an eventful year, darlings, full of drama. Make me proud.
XOXO, Gossip Girl


"Oh my God, we haven't even stepped on campus and she's already posting," Katherine complained with a groan as she walked down the street, Clarity on one side of her, Fisher on the other, and Jameson beside Clarity. She had her favorite heels on with the uniform colored skirt and short-sleeved white button down. It was still warm in August in New York, though it wouldn't be for long, so she was taking advantage of it while she still could. She tucked her phone back into her purse and continued walking.

Jameson had his hands stuffed in his pockets and a cigarette hanging out of his mouth while he walked. He didn't even have it lit, mainly because he didn't smoke but partly because he read it in a book somewhere and decided to steal the idea. "At least she hasn't posted any of the rumors that are probably circulating around about our summers," he offered with a shrug. There were plenty of theories from other people what they did, and they were all usually way off from what actually happened.