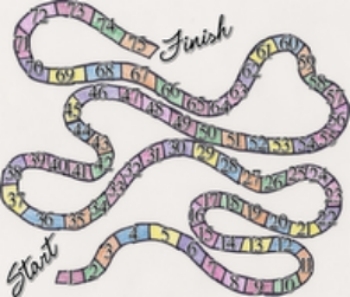 The alternates:
Each number corresponds with the spot on the board.
For colors: The cover has to be at least 50%
For locations: As long as the book takes part at all in the given location .
For Shelves: Any book on the given shelf
For Publication Years: I'll be using how GR has it's publication date listed.
For Authors Names: The first, middle, or last name of the author is ok.
For Titles: Only the first word of the title. A, An, And, and The do not count.
So if the letter is B: The Best Day would be ok. Dear Betty would not be ok.

Hi,
I'm Sue. I love to read but I would prefer not to be captain. Good Luck all and I am so ready to start on Friday !!!!

The only name I can think of is.... Series-us Six

I'm very excited to start this game. I love the name Series-us Six! Thanks Sue! I'm terrible with names so I have nothing better to offer.

I could be captain if no one else wants it. I'm in Central Time, but I don't think I'm likely to be up until midnight most Thursday nights, so I wouldn't be able to roll until around 7am when I get up, though. If we have a night owl or someone in a more advantageous time zone maybe we should go with them.

I think Series-us Six is a great name.

Elishia, if you any week won't be able to roll, I can help out (midnight CST is 8 pm for me).

I'm for Elisha being captain.... Logan you would be a great captain also but since Elishia is in UK ,she won't have to wait for someone to roll to start new book....:)

Totally fine with me! I figure the sooner everyone can start reading the better. :)

I'm a bit scared but that's one of the reasons I offered. Last round I felt like I had less time to read, it wasn't a problem most days. Plus I have plenty of time on my hands :-).

And thanks Maria Helena

Love the team name! I am in central time zone as well, and I have a long commute to work in the morning, so hopefully I can start reading. I can't offer to help with the rolls, I am up by five so by 10 pm I am like a zombie looking for my bed (unless I am reading a really good book).

Thanks Elishia for the PM, it would have taken me till tomorrow to figure out teams had been assigned.

Looks like Elishia is our Captain and name is Series-us-Six...

Elisha I think you got to sign up thread and tell Jenne if you haven't already....:)

Sue wrote: "Looks like Elishia is our Captain and name is Series-us-Six...

Elisha I think you got to sign up thread and tell Jenne if you haven't already....:)

I've just been over so we're all ready to go now.

And no worries Hina, I only realised it was up by accident.

So excited to start tomorrow!!

So that's 7th in a series or takes place for some part in Arizona.

Elisha you will like it....I read it last month...lol

That's good, I've been excited to read it. Can't believe its the last one

I will be reading

a book set in Arizona...

I have been finishing series so I have none that far up.....So what do you do???? Start more series....lmao

. I think I remember seeing that re-reads are okay. Let me know if that's not right and I'll pick something else. It takes place in Tempe, Arizona.

Sue wrote: "I will be reading

a book set in Arizona...

I have been finishing series so I have none that far up.....So what do you do???? Start more series....lmao"

Lol Sue. I've been working on catching up on mine as well so far i've managed not to start anything new this year but not sure this challenge will help I might end up adding more to my tbr.

. I think I remember seeing that re-reads are okay. Let me know if that's not right and I'll pick something else. It takes place in Tempe, Arizona."

No re reads are fine Logan

Just realised you two are reading the same series, i'll have to check out your reviews/ratings

I am probably going to be reading,

Lol Loved it when the dog called her,"A nice inhuman"

HoundedbyKevin Hearne
2/8/2011
4 stars
Alernate-Arizona
review-
Atticus O’Sullivan, last of the Druids, lives peacefully in Arizona, running
an occult bookshop and shape-shifting in his spare time to hunt with his Irish wolfhound. His neighbors and customers think that this handsome, tattooed Irish dude is about twenty-one years old--when in actuality, he’s twenty-one centuries old. Not to mention: He draws his power from the earth, possesses a sharp wit, and wields an even sharper magical sword known as Fragarach, the Answerer.

Unfortunately, a very angry Celtic god wants that sword, and he’s hounded Atticus for centuries. Now the determined deity has tracked him down, and Atticus will need all his power--plus the help of a seductive goddess of death, his vampire and werewolf team of attorneys, a sexy bartender possessed by a Hindu witch, and some good old-fashioned luck of the Irish--to kick some Celtic arse and deliver himself from evil.

This book was kind of confusing in beginning,lots of Irish names...but the further I got into it ,the more I was hooked. Atticus is so down to earth for a non-human...and I soooo fell in love with his dog....

I look forward to continueing this series.

Wow you were quick Sue. I've barely started mine keep getting distracted.

I used to as well but last year I had a few months when I just couldn't read and now i'm just getting back in to the hang of it.

BTW i've just seen that if we all finish before the next roll we get a free pass that we can use at a later date if one of us don't get our review in in time, we can only earn one free pass though.

I just started my book but I'll have it finished by Thursday the latest.

I should be done by Thursday too. I'm out of town this weekend so I'm reading a bit slower than usual, but I should catch up on Wedneday.

Book: The Search by Iris Johansen
Series: Eve Duncan #3, part of the book is set in Arizona.
Date finished: February 9, 2014
Rating: ★★★★
Review: This is the third book in the Eve Duncan series (which I've been reading out of order). Contrary to the other books in the series, the main focus is not on Eve Duncan, Joe Quinn and Jane. Instead, this book focuses on Sarah Patrick and her dog Monty, and John Logan. Eve and her family only plays a minor roll. I really enjoyed this book. It was unpredictable, and I liked the characters much more than when they were introduced in a previous book. It is definitely worth reading!

Don't worry I only started mine late last night and haven't even picked it up today, I need to get on track.

Book: The Search by Iris Johansen
Series: Eve Duncan #3, part of the book is set in ..."
I've only read the first book I really need to continue with the series.

Elishia wrote: I've only read the first book I really need to continue with the series.

It get's better and better.

Roll 1: Spot 7
Book: Up From the Grave
Rating: ★★★★
Finished: 11/02/14
Review:
I really enjoyed this last installment, I think the fact I was caught out twice might of helped. It rounded up everything nicely but it would of been nice to see how Katie got on (btw that bit was so obvious don't know how Cat didn't know). Plus I would like to have seen some grovelling from Don, guess he's punishment is to be stuck as a ghost.

How are you getting along Hina? you've been quiet ☺

Sorry I have been busy since the weekend. My dad was on the tranplant list, and over the weekend they called us for a donation, and transplant surgery. Everything went well. I have been at the hospital since then, but I get plenty of time reading, I started my book last night, I should finish by tonight hopefully.

Aah glad everything went well for him.

Book: Hexed by Kevin Hearne
(Set in Tempe, Arizona)
Date finished: 2/12/14
Rating: ★★★★
Review: I love this series. I listened to the audio of this one a couple years ago, and I was pleasantly surprised to come back to it and not remember all of it. That final showdown with the witches was totally new, I felt! I love how Atticus and Oberon sprinkle humor even in the high tension moments. All of the side characters feel real, even when they act outlandishly. A lot of this one felt like setup for book 3, which I didn't mind so much because I feel like Hearne is creating a full world where events have consequences beyond the individual books - like his effort to repair the scorched earth from book 1. Pretty cool!

I stole your formatting Maria Helena. Thanks! :)

Logan wrote: "I stole your formatting Maria Helena. Thanks! :)"

I'm going to check in again before I go to bed (its only 7pm now) but if Hina's review isn't up by then would one of you be able to post our reviews? We have till midnight but i'll be sleeping when its midnight (or I can set my alarm if nobody's able to do it) I just don't want us to miss a roll.

Hey E there's no time limit on posting the reviews, as long as it's in a timely manner you're good :) go get some sleep!

Oh ok that's fine then I can do them when I wake up thanks Jenne.